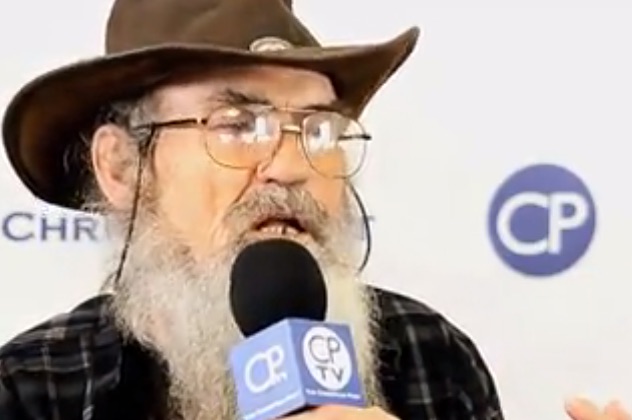 Si Robertson, one of the stars of the US Duck Dynasty show has rock solid proof that atheists do not actually exist at all.

The context within which this claim emerges is that there is a new movie being promoted, “Faith of Our fathers”, and while being interviewed (see clip below) at 02:45 he proceeds to explain that he does not believe that there are atheists because there is too much documentation … “our calendars are based upon Jesus Christ”. He then goes on to claim that the first time somebody gets in a bit of a bind, they turn to god and ask for help, and yes the line “there are no atheists in foxholes” was repeated.

So here is the clip …

OK, so let’s have a bit of fun and look at both of these claims, but first one additional question. Is he doing this to simply drum up publicity, or does he really believe what he is saying? My instinctive reaction is to think that he does in all probability truly believe what he is saying, but would add the observation that he is appears to be saying it more to himself than anybody else. In other words, he is having a hard time coming to terms with the reality of people not believing what he believes, and so he is in denial regarding that reality.

Clearly the year on the calendar is quite obviously evidence that Christian belief was historically very much a central part of the culture, but that is not in any way proof that his specific beliefs are true or that there is actually a god. Perhaps he also thinks that the Mayan calendar is also proof that the Mayan gods are real.

OK, let’s do a quick thought experiment and ponder over what else we have on the calendar. In addition to the year we also have months named after quite different gods …

Moving on, we also have days of the week that introduce even more gods …

… so when Mr Robertson assures us that the calendar is proof that god is real, I can only wonder which specific god he has in mind because apparently there are lots to choose from, so yes, once a week, lots of documentation and proof that Thor is quite real – all hail Thor.

So is it true that there really are no atheists in foxholes?