Now be warned, I have some serious doubts that this is real, and I would advise an appropriate degree of caution being applied, I strongly suspect somebody manufactured this to simply stir up a bit of attention.

So the story is that an anonymous poster popped up on Reddit seeking legal guidance, in fact here is what he posted … 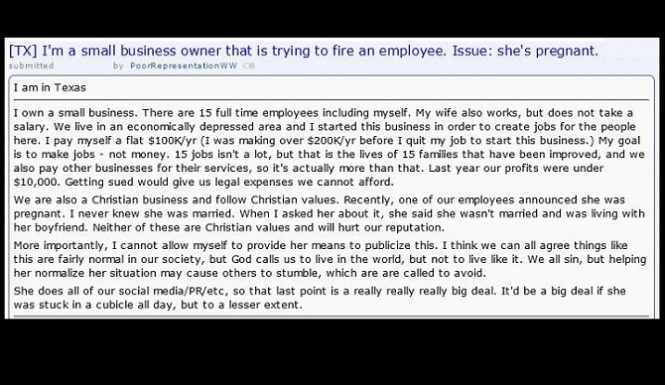 So essentially what we know is that …

He has since deleted his post, but the comments remain for all to see, and as you might expect, it is popping up all over the place in reddit including /r/atheism and of course /r/subredditdrama

It is of course distinctly possible that this is (in the words of one commenter) … “a typical Texan mom & pop shop with the owner’s head firmly planted inside his own ass, thinking of himself as a God over his employees” … and yet why would somebody like that come to reddit seeking such advice instead of sitting down with his lawyer? No, my feeling is that reddit is being played here by somebody who has tapped into a TX stereotype. As another commenter pointed out, asking a question like this on reddit is perhaps akin to … “going onto the Blaze asking how to compost food with my gay chinese communist lover.“. If nothing else, you do have to love the commenters, and least you wonder about Blaze, well just two words explain that one – Glenn Beck.

“Hi, Free Republic, I came here because I hear you are all such open-minded activists! I’m a gay Black woman living in one of the gayer parts of San Francisco and I am wondering whether it’s legal to give out marijuana and ecstasy as wedding favors at my really gay lesbian wedding. I just want all my super-gay friends to be really happy on this big day for me and my bride! Thanks in advance for your legal advice! If you can’t help me I guess I’ll wander over to the Fox News comment section.”

I’m sure you require no imagination at all to envisage the replies.

So what is the best way to handle stuff like this?

When faced with stuff that you can neither confirm nor deny, the best stance is to deploy doubt, and if new evidence then pops up, use that to either change your mind or not if there is still reason to doubt.

The one other observation to draw from this is that the vast majority of people who took this seriously, regardless of their belief or non-belief, acted both decently and morally by suggesting to him in no uncertain terms “no, you don’t get to do that”, and that is something I personally found quite encouraging.