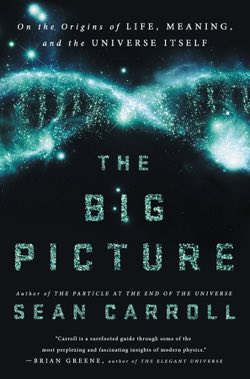 Hey heads up folks, Sean Carroll’s new book, “The Big Picture” is finally available as of 10th May, and it looks really interesting.

Side note: I have no financial interest here, this is purely a personal book recommendation for something that I think looks very good. No I have not read it yet, it has only been out for one day so far and I don’t read that fast, but because I have read stuff by Sean before I have already reached the conclusion that he is a really good science communicator.

“Weaving the threads of astronomy, physics, chemistry, biology, and philosophy into a seamless narrative tapestry, Sean Carroll enthralls us with what we’ve figured out in the universe and humbles us with what we don’t yet understand.  Yet in the end, it’s the meaning of it all that feeds your soul of curiosity.” —Neil deGrasse Tyson

But Neil is not a lone voice, others have also been saying good things …

“With profound intelligence and a lucid unpretentious language, Sean Carroll beautifully articulates the world view suggested by contemporary naturalism. Thorny issues like free will, the direction of time, and the source of meaning and morality are clarified with elegance and insight. The Big Picture shows how the scientific worldview enriches our understanding of the universe and ourselves. A reliable account of our knowledge of the universe, it is also a serene meditation on our need for meaning. This is a book that should be read by everybody.”
–Carlo Rovelli, author of Seven Brief Lessons in Physics“Carroll is the perfect guide on this wondrous journey of discovery. A brilliantly lucid exposition of profound philosophical and scientific issues in a language accessible to lay readers.” –Kirkus (starred review)

“In this timely exploration of the universe and its mysteries—both physical and metaphysical—Sean Carroll illuminates the world around us with clarity, beauty and, ultimately, with much needed wisdom.” —Deborah Blum, director, Knight Science Journalism Program at MIT, author of The Poisoner’s Handbook

“Sean Carroll is a leading theoretical cosmologist with the added ability to write about his subject with unusual clarity, flare, and wit.” —Alan Lightman, author of The Accidental Universe and Einstein’s Dreams

“Until now you might have gotten away believing modern physics is about things either too small or too far away to care much about. But no more. Sean Carroll’s new book reveals how physicists’ quest to better understand the fundamental laws of nature has lead to astonishing insights into life, the universe, and everything.” —Sabine Hossenfelder, Frankfurt Institute for Advanced Studies

“Instead of feeling humbled and insignificant when gazing upward on a clear starry night, Carroll takes us by the hand and shows us how fantastic the inanimate physical Universe is and how special each animate human can be.  It is lucid, spirited, and penetrating.” —Michael Gazzaniga, author of Who’s in Charge?: Free Will and the Science of the Brain

“From the Big Bang to the meaning of human existence, The Big Picture is exactly that— a magisterial, yet deeply fascinating, grand tour through the issues that really matter.  Blending science and philosophy, Sean Carroll gives us a humane perspective on the universe and our place in it.  As gripping as it is important, The Big Picture can change the way you think about the world.” —Neil Shubin, author of Your Inner Fish

To find out more about the book, including the list of contents, then you will find it all here on Sean’s website.

To actually get a copy, just go to amazon.com and search for the title “The Big Picture”. OK, sorry UK folks, but the UK edition is not due out until 1st Sept.

If you are not sure about getting it, then just pause and let others read and then review it first.

The Wired interview is interesting because it delves into Sean’s thinking and thus you gain an insight into the stance that his book takes, and here is an extract from that interview …

The book draws upon elements of your own life, of popular culture, particle physics, history, philosophy and cosmology. What’s the thread that binds all these themes?

It is a long book [Ed. note: 464 pages]. I cut some of it. There are two threads. One is an apologia for naturalism. I’m saying that despite appearances to the contrary in our everyday life, this world we live in is governed by laws that don’t have goals or purpose that are not sustained by anything outside the world. It is just stuff obeying the laws of physics over and over again. The other thread is that that is OK. The fact that you were not put here for any purpose, that we are collections of atoms that always obey the laws of physics is not reason to despair that life is meaningless.

Naturalism says that we were not put here for any purpose. But that doesn’t mean there isn’t such thing as purpose. It just means that purpose isn’t imposed from outside. We human beings have the creative ability to give our lives purposes and meanings. Just as we have the ability to determine what is right or wrong, beautiful or ugly. That point of view is not only allowed, it is challenging and breathtaking in its scope.

The cool thing about Sean is that clearly he has opted to not simply bury himself in his work as a cosmologist and Physics professor specializing in dark energy and general relativity, and so just interacts with others within that community while wearing his “professor in the Department of Physics at the California Institute of Technology” hat, but instead he also has taken upon himself the task of being a science communicator to everybody.

1 thought on “Book Alert: “The Big Picture” by Sean Carroll”