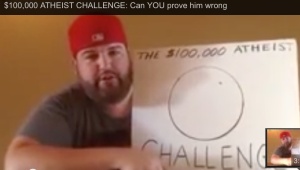 Alas yes, once again it is time for the almost daily religious ritual of “Let’s shift the burden of proof” gambit. Today’s example comes from deep inside the religious bubble of Evangelical pastor and Internet celebrity Joshua Feuerstein, and yes, it’s the guy in the red baseball cap who has previously made himself famous by promoting some rather silly claims.

So here is his latest gem …

What he fails to grasp is that he is making a god claim and so the responsibility rather firmly rests with him to prove his claim, that is called the “burden of proof”. What nobody gets to do in any context ever is assert a claim and then announce it to be true because nobody can disprove it.

… are all real and I offer £100 Million to anybody who can disprove any of those. Since nobody can, then they must all be quite real … right?

Of course not, and that perhaps is why so many are laughing at Feuerstein.

Seth Andrews, the former Christian Broadcaster for over 10 years and now the Thinking Atheist podcaster, has a nice response to the Feuerstein Fallacy … and here it is …

It really is time to stop pretending to know things that are not really known at all.