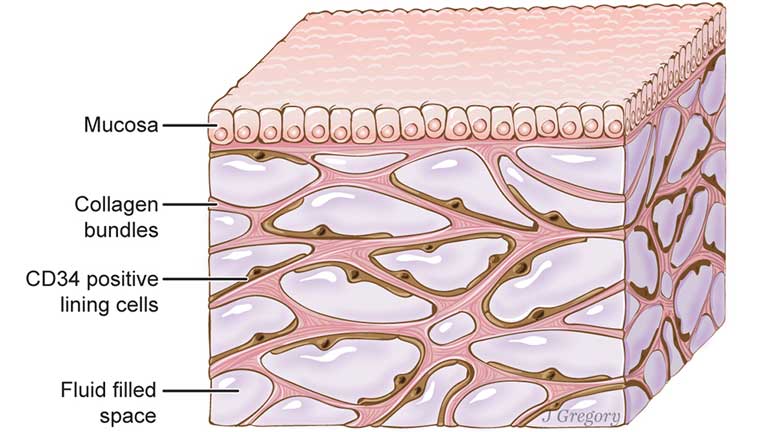 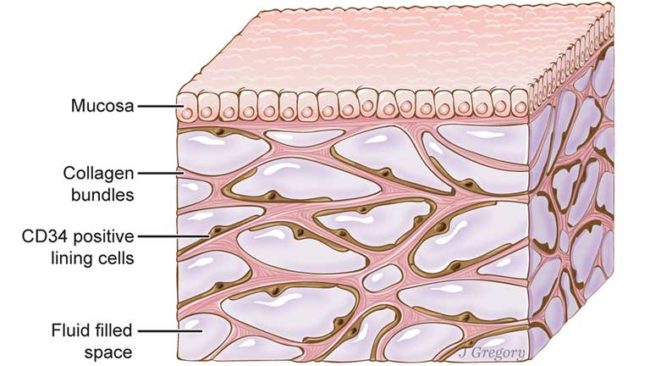 A paper published within Scientific Reports, an Open Access journal published by Nature, has resulted in rather a lot of media stories concerning the supposed discovery of a new Organ that was previously unknown. Entitled “Structure and Distribution of an Unrecognized Interstitium in Human Tissues“, it describes a distributed system of fluid filled cavities in the connective tissue.

The short answer is “no”.

The slightly longer answer is that nowhere within the paper do the authors make the claim that it is a new organ, nor does the paper provide any evidence to justify such a claim.

To take it a bit further, the existence of what they document is not a new discovery at all, there is no justification for any claim that something never previously observed has suddenly been noticed. As noted by most commenters under the open access paper, there is no new discovery here, for example …

… and yet various media stories claimed stuff like this …

the interstitium had previously gone unnoticed despite being one of the largest organs in the human body.

This is simply not true, so why did the media get it so very wrong?

… The researchers say that no one saw these spaces before …the current study is the first to define the interstitium as an organ in its own right, and as one of the largest of the body, say the authors.

… and so the press simply regurgitated what they were being fed.

The authors themselves are not totally blameless here. They are quoted in the press release, so this is not just about the NYU Press Release folks going a bit over the top with some PR spin.

To be wholly fair, there is new science here, and there is a new discovery, but that relates specifically to how they made the observation. It is not a new organ, nor is it the discovery of a previously unknown and undiscovered structure.

If we stopped there, then this would be a story about a press release going a tad overboard with some PR, but it is not. This now all takes a sharp left-hand turn out of the medical arena and right into the pseudoscientific arena.

Neil Theise, professor of pathology at NYU School of Medicine, and Rebecca Wells, professor of medicine and bioengineering at University of Pennsylvania, on a segment of Science Friday where they discuss their study, said that the interstitium might explain how acupuncture works. Some news outlets even decided to lead with the acupuncture angle. In an article for The Cut Theise digs deeper:

“Acupuncture has no anatomical correlate,” says Theise. “There’s no vein; there’s no artery; there’s no nerve corresponding to the meridian [the map of acupuncture points on the body].” Without any anatomical correlate, it’s been difficult for researchers to explain why a localized therapy like acupuncture could have such far-reaching effects. Knowing that the interstitium is filled with fluid could change that. “This is the layer of skin the acupuncture needle goes into,” says Theise. “There’s fluid in there. When you put the needle [into an accu-point], maybe the collagen bundles are arranged into a channel through which fluid can flow.” Studies show that “sham” acupuncture, or acupuncture in which needles are placed a centimeter off the meridian, doesn’t provide the same kind of pain relief that true acupuncture does: Sham accu-points may reduce pain in the immediate, local vicinity, but won’t have the widespread effects that true accu-points do. If accessing true accu-points allows interstitial fluids to travel throughout the body, that might account for the difference.

That link is to a news report of one dubious study involving carpal tunnel syndrome, “electroacupuncture” and functional MRI scanning, as if that establishes the reality of meridians and acupoints.

There is one rather fatal flaw here. Acupuncture is pseudoscientific nonsense and does not actually work at all. As noted by Steven Novella, a clinical neurologist and assistant professor at Yale University School of Medicine …

In 2013 I wrote a thorough review of acupuncture, along with David Colquhoun, which I think convincingly showed through the published research that acupuncture does not work for anything. There have been several thousand studies of acupuncture, and after all that research we can make several very confident conclusions:

Since then I have kept up with the acupuncture literature and nothing has changed, except perhaps the overall quality of acupuncture studies has gotten worse. That’s right – worse. Researchers have mostly abandoned the highest quality studies, because they were frustratingly negative, and have shifted to more preliminary and practical designs that don’t really test efficacy. It seems that now they are just going for the headlines, not doing real science.

It is bad enough to be caught hyping up a study to an unwarranted degree, but for the authors of this study to then use that hype to promote pseudoscientific nonsense reveals that we still perhaps to one degree living in the dark ages and have a long way to go.

Where this goes next is most probably, as noted by Orac, down this path …

Unfortunately, thanks to an overeager PR department at NYU, coupled with investigators who mistakenly believe that acupuncture works and have been willing to shoehorn their discovery into the narrative promoted by quacks, I foresee a whole lot of “interstitium” quackery and use of Theise’s and Wells’ discovery by quacks to “explain” their quackery coming. It won’t just be acupuncture, either. Indeed, Malik went beyond acupuncture to claim that this discovery suggests how Tai Chi and yoga supposedly “work,” too. Chiropractors will soon be all over the interstitium because anything involving fascia and the lymphatics is catnip to them. Soon we’ll see regimens designed to “detox” your interstitium or to use your interstitium to “detox.”” We’ll learn from antivaxers that vaccines are so harmful because the evil “toxins” get into the interstitium. I guarantee it. (I’m guessing some antivaxer somewhere has already done this.)

This is the harm that poor science communication can cause. Not only did PR department spin vastly overinflate the importance of a study with an interesting finding beyond what that finding warrants, but the investigators themselves have provided a narrative custom-made to promote quackery.