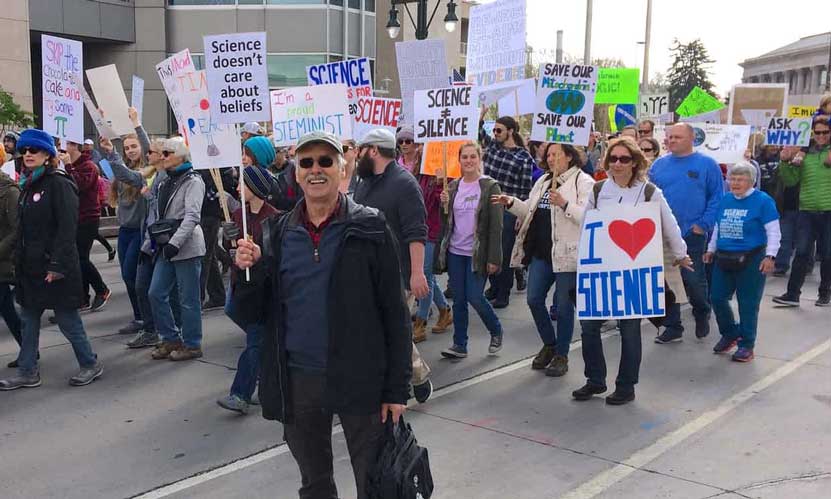 Thanks to Gallop we need not guess about the quantity of ignorance and anti-science that prevails within the US Conservative tribe, because they have provided a very precise measurement.

What the latest Gallop poll reveals is that during the past year not much has changed.

There really is no polite way of saying it, but when it comes to the topic of Climate change, if you are a Democrat that you are most probably adopting an evidence-based view, if you are independent, well, not so much. However, being a Republican appears to more or less guarantee that you are an idiot.

Take for example the second question that asks “most scientists believe global warming is occurring“. This is not asking you what you believe, but instead is asking what the majority of scientists advise. You don’t even need to agree with their position.

… and on and on. It takes only a few seconds using a smartphone to find out. Yet when Republicans are asked if “Most scientists” agree that Global Warming is happening, only 42% of them think so. That leaves 58% of them rejecting an easily verifiable fact.

There really is no other way to say it, but words such as “idiot” and “clueless” cease to simply be derogatory terms and instead function as statements of measurable fact.

Putting aside the politics and looking at the group as a whole, Gallop is able to use the answers to four of the question that people gave to put everybody into one of the following three groups …

They can then use these categories to look back over the past several decades and see how the overall trends have changed. The chart looks like this … 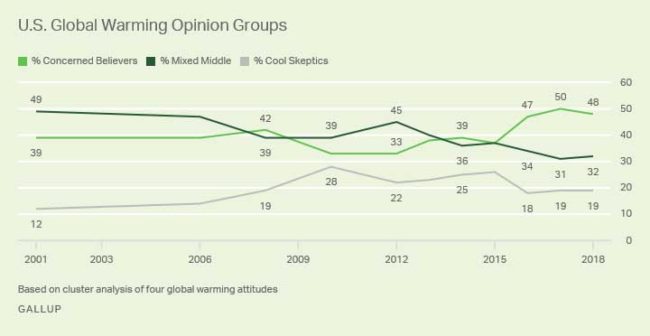 There are other ways of looking at all of this.

Age, Gender, and also educational differences do also stand out rather clearly.

The Gallop conclusion is this …

The higher level of concern Americans have exhibited about global warming since 2016, particularly in terms of worrying about the issue and believing it is caused by human activity, is largely intact this year.

One reason for this stability is that Americans’ views on the issue are becomingly increasingly partisan and therefore entrenched. With Trump reversing many of his predecessors’ policies aimed at curbing global warming, Democrats are feeling a greater sense of urgency about the issue, while Republicans have either remained as skeptical as they had been in the past or have become more so.

They are correct regarding “partisan”, especially with a tribal chief declaring it all a hoax. This perhaps leads to many within the tribe unthinkingly falling into line.

My own personal bottom line is that many Republicans are clueless idiots. However, you don’t need a poll of an understanding of Climate change to work that out. Anybody seriously supporting Trump is more or less self-certifying this. The fact that the Whitehouse has an almost permanent leaving party due to the astonishing degree of staff turnover should offer some subtle clue … but apparently not.

There are also some other not so subtle clues. His gross dishonesty that goes on public display via twitter on an almost daily basis, or his racist remarks and support for literal Nazis as “very fine people”. Let’s not forget that he is also a self-confessed sexual predator.

If all of that, and much more fails to set any alarm bells ringing, then yes, the term “clueless idiot” is indeed theirs to own and cherish.

I get that many are feeling left behind, angry, isolated, fearful of change, and insecure, but to then continue to embrace Trump as the solution is not simply mistaken, but borders on an almost full-blown psychoses.

There is perhaps some potential empathy remaining. If you live inside the Fox News misinformation bubble then it is perhaps indeed understandable that many have been, and continue to be deceived and manipulated. Some are hardcore denialists and utterly immune to facts, but many are simply unaware and kept in a state ignorance quite oblivious that they are being lied to.

Meanwhile the reality of climate change will continue unabated because reality does not give a toss about party politics.

Dana Nuccitelli, writes in the Guardian about this – American conservatives are still clueless about the 97% expert climate consensus.