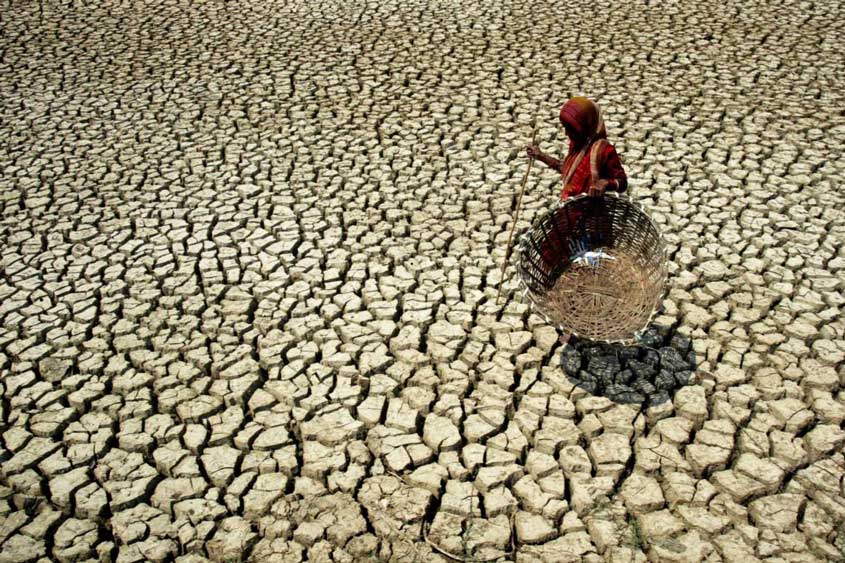 There is no denying that humans are very adaptable, but there are limits. As Climate change proceeds then it is inevitable that those limits will be tested within some regions, but what exactly are those limits, has anybody done a study on this?

I’m pondering over this question in the context of the news that by the end of this century deadly heat waves will start to hit a limit. See here (UK’s Guardian), and also here (National Geographic) …

South Asia, where one-fifth of the world’s people live, could face summer heat waves that are impossible to survive without protection, thanks to global warming, new research suggests. Hardest hit regions are in northern India, Bangladesh, and southern Pakistan, home to 1.5 billion people. These are also among the poorest regions in South Asia. Many are dependent on subsistence farming that requires long hours of hard outdoor labor.

“That makes them very vulnerable to these climatic changes,” said MIT professor of environmental engineering Elfatih Eltahir, one of the co-authors.

Before we accept such terms as “impossible to survive” we should first ask ourselves just how such a limit has been determined, so does such a limit exist?

In 2009 Steven C. Sherwood, of University of New South Wales, and Matthew Huber from Purdue University, co authored “An adaptability limit to climate change due to heat stress“. The paper was published within PNAS.

Within this paper they argue that humans cannot simply adapt beyond a very specific temperature without access to air conditioning because heat stress has a rather robust upper limit.

So what is that limit?

They highlight that 35 C for extended periods will induce hyperthermia within both humans also also other mammals.

Hey wait a minute, that sounds rather low. I’ve personally experienced temperatures in excess of that. Actually, it is not quite what you think it is. They are specifically referring to what is called the wet-bulb temperature, so this is not just your normal 35 C, but rather is a wet-bulb reading of 35 C.

To be clear, this does not happen anywhere on the planet today … yet.

The web-bulb temperature is the temperature that air reaches if it were cooled to saturation. To understand this, think of it in these terms. When we sweat, that evaporation helps to cool us. In essence, the wet-bulb temperature is the lower limit that can be reached by water evaporation, and so no matter how much you sweat, you will not get any cooler. If you are exposed to such conditions and have no access to an air conditioner, then the heat will inevitably build up within you body because your sweat will not dissipate the excess heat – you will die.

This is not specific to the weak or elderly, if the wet-bulb temperature reaches or exceeds 35 C, then you, as a very healthy human can’t sweat excess heat away.The term for this is hyperthermia. which is of course the inverse of too much heat loss hypothermia. In other words it is a combination of heat and humidity, that overwhelms you bodies heat-regulating mechanism.

What does that actually mean is reality?

If the air temperature was 46 C and the humidity was about 50% then that gets you to this 35 C wet-bulb limit.

Basically you core body temperature is 37 C and so you skin maintains a temperature of 35 C (or below) so that the core temperature can be maintained.

The highest web-bulb temperature we generally reach today on the planet is about 30 or 31 C. We have not reached this 35 C limit … yet. Yes, we do indeed experience very high temperatures in desert regions, but because they are very dry, the relative humidity is low.

How does this play out with Global Warming?

If the increase in Global temperatures reached 7 C,  then we start to hit this limit in some regions.

If it climbs even further and Global temperature increases reach 11-12 C, then the majority of the human population will be exposed to such limits.

Key Point from the paper

If warmings of 10°C were really to occur in next three centuries, the area of land likely rendered uninhabitable by heat stress would dwarf that affected by rising sea level. Heat stress thus deserves more attention

So far what I have talked about comes via that 2010 paper, it is all background context. The latest media stories have been motivated by the emergence of a new paper that has just been published in Science Advances (AAAS) …

…we project that extremes of wet-bulb temperature in South Asia are likely to approach and, in a few locations, exceed this critical threshold by the late 21st century under the business-as-usual scenario of future greenhouse gas emissions. The most intense hazard from extreme future heat waves is concentrated around densely populated agricultural regions of the Ganges and Indus river basins. Climate change, without mitigation, presents a serious and unique risk in South Asia, a region inhabited by about one-fifth of the global human population…

To specifically quantify that, we are talking about roughly 1.5 billion people being at risk.

“…Not even the fittest of humans can survive, even in well-ventilated shaded conditions, when the wet-bulb temperature stays above 35 …

… Generally speaking, it is the poorest that are working outdoors and that don’t have access to air conditioners. This is particularly unjust, because per capita emissions in most of these poorer regions are less than a tenth of those in industrialized nations..

..We seem to be finding that low-lying regions that are hot for parts of the year in the vicinity of warm water bodies, which are sources of humidity, are particularly vulnerable ..”

“…In northern India, Bangladesh and southern Pakistan, much of the population is dependent on subsistence farming that requires long hours of hard labor out in the open and unprotected from the sun…”

… It’s a dilemma for India, which is a country in urgent need for development. What this brings up is a choice about saving their population from extreme heat by joining in a full-fledged effort to cut emissions. This brings the message home for countries like India that global warming is not a remote abstract concept….