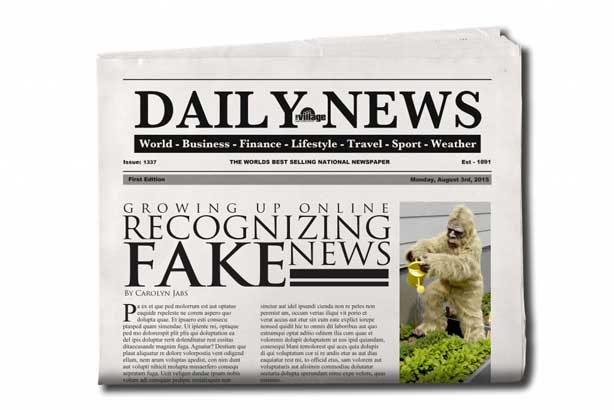 Since we live in the age of “Fake News” and “Alternative Facts”, then knowing how people work out what is and is not actually true  is something I find interesting, and I suspect I’m not alone in this.

If I picked my personal top 10 most reliable news sources, you might simply agree, but then again you might also roll your eyes and mutter, “You have got to be kidding”. However, today my own personal selection is not what is on offer. Instead, I have the results of a poll by the Reynolds Journalism Institute at the University of Missouri. The bigger picture here is that this is part of their “Trusting News” project.

Yes, it is still just subjective opinion, but finding out what the general consensus is when you poll across the entire political spectrum is still interesting. However, what is far more fascinating is why they did this poll and what was learned.

Before we get to the top and bottom 10 listing, there are first a few points to draw out from the full report.

However, the really interesting aspect here is why they did this poll. The motivation behind it is to enable newsrooms, specifically the 28 partners involved in the project, to not only understand how well their audiences trusts them, but for them to also learn how they can adopt specific strategies to demonstrate their trustworthiness. Now that is indeed a worthwhile goal, but only if they actually strive to be fair and balanced. That of course would be a contrast to a specific news source that makes a “fair and balanced” claim, but actually strives to do the complete opposite of that.

There really are no huge surprises here, except perhaps the observation that some well-known sources did not make either the top or bottom cut. If you are wondering where Fox News is, well they made No.11 on the least trusted list, hence they are not in the bottom 10.

OK, so on with the show, here are the lists …

Now remember, this is simply a poll. It is not a statement of fact, but rather of generic public perception when you straddle the political divide. My own personal listing for each would be different, as I suspect yours would also.

To expand upon the above, below is a graph from the full report that not only expands the scope of the lists, but also illustrates the degree of trust for the various sources cited … 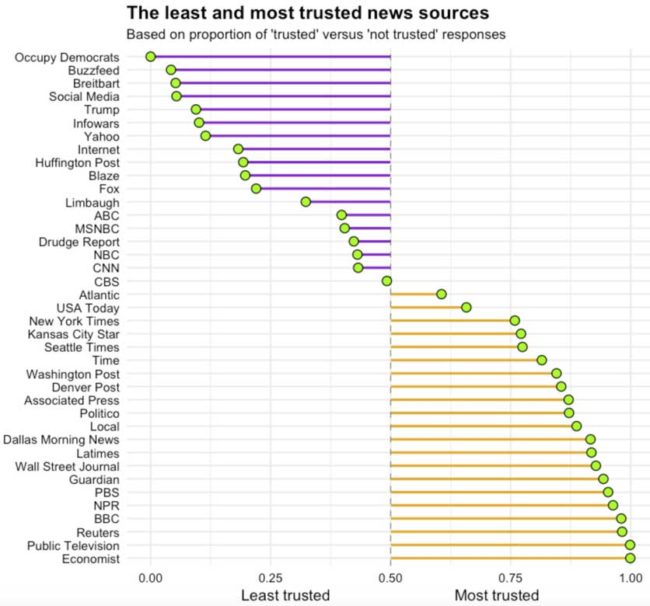 It is perhaps interesting to note that sources that are not actual news sources at all made the list. What is also rather encouraging is that Trump, Breitbart, Infowars (Alex Jones), and The Blaze, all get robustly rejected.

A big non-surprise not illustrated by the above but instead buried in the detail is that conservatives cited Fox News as trusted, and Liberals cited The New York Times, NPR and The Washington Post as trusted, but that of course is what we all already know is the general perception that exists.

What exactly did they learn?

Three things. Here are the precise descriptions from the full report …

there was a relatively large difference between users with different political ideologies. Specifically, liberal respondents were a lot more trusting and supporting than conservative respondents. Given the rhetoric used in the most recent general election, however, this result may not be entirely surprising.

The survey respondents were also asked to describe what makes a news source credible. What emerged were responses that frequently mentioned presenting information on both sides, getting news from multiple sources, and using fact checking.

I do confess that if you trust Fox News because this is what you sincerely think is going on there, then I really do not understand what is going on inside your head at all or for that matter how you even manage to tie your shoelaces in the morning without assistance. Yes well OK, that’s perhaps a bit of my own personal political leanings leaking out there, but I’m also not wrong about that. If you truly think Fox News is “fair and balanced” then I do encourage you to seriously review the vast swathes of evidence that confirm this to be an “alternative fact”.

Deeper Survey Details – Who, when, and how many?

Data was collected in February- March 2017 timeframe using an online survey made available to users of the digital media platforms of twenty-eight different newsrooms across the United States.

Most newsrooms made reference to the survey on their websites and social media accounts.

What is fascinating is that some of the most trusted from the top 10 list are not US-based. The Economist, the BBC, and also The Guardian are all UK-based news outlets.