What does it even mean?

Unlike the science based award, the Nobel Peace prize is highly political. Sometimes they get it right, and sometimes very very wrong. Let’s mull over this for a bit.

… and goes on to specify that the prize is to be awarded by a committee of five people chosen by the Norwegian Parliament. The other Prizes, are (as he also stipulated) decided by the Swedish science academies, and so involve a great deal more rigour. (Hint: Members of science academies tend to know a bit about science and thus can make good choices, which they usually do). Because “Peace” is chosen by politicians it is deeply subjective and also highly politicised.

So why did Nobel create a Peace prize?

To illustrate what I’m getting at, let’s look back and see how it has all played out …

What perhaps makes the award even weirder is that Mahatma Gandhi never won. He was nominated in 1937, 1938, 1939, 1947, but never received it. That specific non-award has been publicly regretted. Geir Lundestad, Secretary of Norwegian Nobel Committee, said in 2006 …

Having said all that, it is not all bad because sometimes they do get it right by spotlighting somebody truly inspirational. For example Nelson Mandela, or Martin Luther King Jr. (You can find a full list of past winners here). There is however no ducking the observation that it all screams out for Parody and mockery.

The Onion Delivers – Top Candidates For The 2018 Nobel Peace Prize

No two other people on Earth gave a more impressive handshake in the past year.

Perhaps no one has made a greater impact on global peace than Snowden, who’s famous for doing something with computers a few years ago.

This shameless attention addict just can’t bear letting anyone else share the spotlight, can she?

He’s the democratically elected leader of a Western European country, so it just seems to make sense, right?

Might as well throw them a bone now since they’ll have nothing to advocate for in a couple years.

Just to own the libs.

It’s all out of this world, man, you dig?

This year I believe they actually got it right. 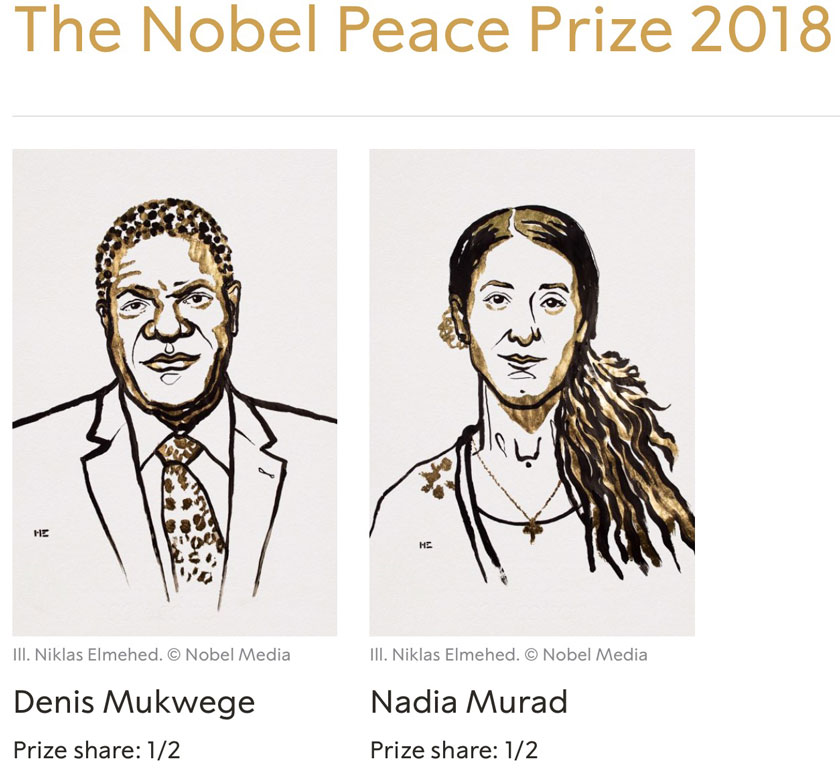 The Nobel Peace Prize 2018 was awarded jointly to Denis Mukwege and Nadia Murad “for their efforts to end the use of sexual violence as a weapon of war and armed conflict.”

The Norwegian Nobel Committee has decided to award the Nobel Peace Prize for 2018 to Denis Mukwege and Nadia Murad for their efforts to end the use of sexual violence as a weapon of war and armed conflict. Both laureates have made a crucial contribution to focusing attention on, and combating, such war crimes. Denis Mukwege is the helper who has devoted his life to defending these victims. Nadia Murad is the witness who tells of the abuses perpetrated against herself and others. Each of them in their own way has helped to give greater visibility to war-time sexual violence, so that the perpetrators can be held accountable for their actions.

The physician Denis Mukwege has spent large parts of his adult life helping the victims of sexual violence in the Democratic Republic of Congo. Since the Panzi Hospital was established in Bukavu in 1999, Dr. Mukwege and his staff have treated thousands of patients who have fallen victim to such assaults. Most of the abuses have been committed in the context of a long-lasting civil war that has cost the lives of more than six million Congolese.

Denis Mukwege is the foremost, most unifying symbol, both nationally and internationally, of the struggle to end sexual violence in war and armed conflicts. His basic principle is that “justice is everyone’s business”. Men and women, officers and soldiers, and local, national and international authorities alike all have a shared responsibility for reporting, and combating, this type of war crime. The importance of Dr. Mukwege’s enduring, dedicated and selfless efforts in this field cannot be overstated. He has repeatedly condemned impunity for mass rape and criticised the Congolese government and other countries for not doing enough to stop the use of sexual violence against women as a strategy and weapon of war.

Nadia Murad is herself a victim of war crimes. She refused to accept the social codes that require women to remain silent and ashamed of the abuses to which they have been subjected. She has shown uncommon courage in recounting her own sufferings and speaking up on behalf of other victims.

Nadia Murad is a member of the Yazidi minority in northern Iraq, where she lived with her family in the remote village of Kocho. In August 2014 the Islamic State (IS) launched a brutal, systematic attack on the villages of the Sinjar district, aimed at exterminating the Yazidi population. In Nadia Murad’s village, several hundred people were massacred. The younger women, including underage children, were abducted and held as sex slaves. While a captive of the IS, Nadia Murad was repeatedly subjected to rape and other abuses. Her assaulters threatened to execute her if she did not convert to their hateful, inhuman version of Islam.

Nadia Murad is just one of an estimated 3 000 Yazidi girls and women who were victims of rape and other abuses by the IS army. The abuses were systematic, and part of a military strategy. Thus they served as a weapon in the fight against Yazidis and other religious minorities.

After a three-month nightmare Nadia Murad managed to flee. Following her escape, she chose to speak openly about what she had suffered. In 2016, at the age of just 23, she was named the UN’s first Goodwill Ambassador for the Dignity of Survivors of Human Trafficking.

This year marks a decade since the UN Security Council adopted Resolution 1820 (2008), which determined that the use of sexual violence as a weapon of war and armed conflict constitutes both a war crime and a threat to international peace and security. This is also set out in the Rome Statute of 1998, which governs the work of the International Criminal Court. The Statute establishes that sexual violence in war and armed conflict is a grave violation of international law.  A more peaceful world can only be achieved if women and their fundamental rights and security are recognised and protected in war.

This year’s Nobel Peace Prize is firmly embedded in the criteria spelled out in Alfred Nobel’s will. Denis Mukwege and Nadia Murad have both put their personal security at risk by courageously combating war crimes and seeking justice for the victims. They have thereby promoted the fraternity of nations through the application of principles of international law.

Nadia Murad named as a joint-recipient of the 2018 Nobel Peace Prize for her courageous campaign to bring justice for the Yazidi women and girls who were systematically raped and sexually abused by ISIS. https://t.co/c5xsgNN8oB pic.twitter.com/Y57Dh4i7FB