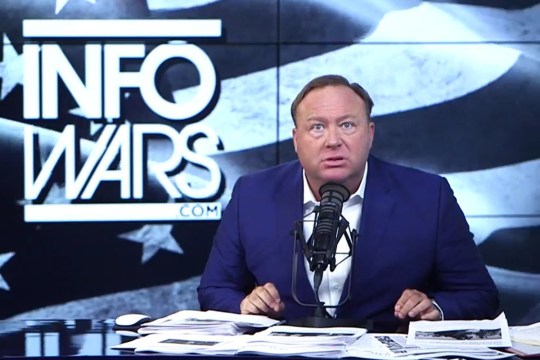 If you don’t know what Infowars is, or if you have never had the “joy” of listening to Alex Jones, then consider yourself lucky. Jones and his Infowars platform is the essence of Obnoxiously Offensive Lunacy.
Basically whenever something happens, Jones will pop up to promote some daft conspiracy claim related to it.

The one that has perhaps been part of his downfall is his vigorous promotion of the idea that the Sandy Hook shooting was faked, that the parents of the slain children were actors, and that all the children who died never actually existed. The broadcast of this idea resulted in some of his fans going as far as harassing and threatening the parents of the children who died on a daily basis. They could not take this, so they used the law to go after Jones. (I was writing about all this last June).

Why does this matter to all of us?

Many of the fake news conspiracy theories in circulation originate from the stuff that Jones simply makes up. He is the alpha vector for a great deal of it.

This has made Jones very rich. He is basically whipping up fear so that he can then sell his gullible followers some overpriced crap. (“They are putting stuff in the water that turns frogs gay – buy my water filters“). His Sandy Hook Fake News is now leading to his downfall.

The latest twist to all of this is the an InfoWars editor, Paul Watson, has been telling all.

Published just a few days ago on 12th Dec 2019 the deposition made by Paul Watson in an ongoing case against Jones was released by the legal firm involved.

“This Sandy Hook stuff is killing us,” Watson wrote to Jones on December 17, 2015, according to court documents filed this week. “It’s promoted by the most bat shit crazy people like [Jeff] Rense and [James] Fetzer who all hate us anyway. Plus it makes us look really bad to align with people who harass the parents of dead kids. It’s going to hurt us with Drudge and bringing bigger names into the show. Plus the event happened three years ago. Why even risk our reputation for it?”

Again and again, Watson can’t help but throw Jones under the bus by routinely acknowledging that what Jones did was deliberate and irresponsible:

Bankston: Now it has bothered you personally to be associated with the kind of tasteless things being said about the parents on Infowars, correct?

Watson: Well, it obviously bothered me at the time because of the content of that email.

Bankston: Correct. And it continued to bother you, right?

Watson: So long as the same narrative was being pushed, yes.

Bankston: Okay. Because Mr. ― Let’s be honest about this email in 2015. Mr. Jones didn’t listen to you, correct, on this topic?

Watson: Whether he toned it down, I couldn’t say, but I mean, if you want to say he didn’t ― he didn’t listen to me in that instance, you could make that argument, yes.

Watson said Jones’ coverage of the shooting was not “decent and right”:

Watson: Well, it’s a subjective term, but, from my ―

Bankston: In your opinion, Mr. Watson.

Watson: From my personal perspective, decent and right, I would not have covered it in that way, no.

There is a lot more legal information available here.

Mark Bankston, the Attorney who took the above Deposition is quoted as follows by the Huff Po …

“Time is running out for Mr. Jones,” Bankston said in a statement. “The day is fast approaching when he will be held accountable for his monstrously reckless lies about our clients.”

Jones is going down. Now that is indeed something to celebrate.

Peddling Lies and Fake News does have consequences.

Don’t think of Watson as a hero …

“You didn’t stop it though, did you Mr. Watson?” Bankston asked in the deposition.

“Well, I aired my grievances, but I don’t control Infowars, so,” Watson responded.

“Correct,” Bankston replied. “You aired your grievances in an email that we see, but then after that email in 2015, you just kept working for the company that was doing this, didn’t you?”

Make no mistake, Watson is simply another Far-Right shock-jock that does exactly the same as Jones. For him Jones is simply a rival to to shoved out of the way so that he can carry on peddling his own Fake News.