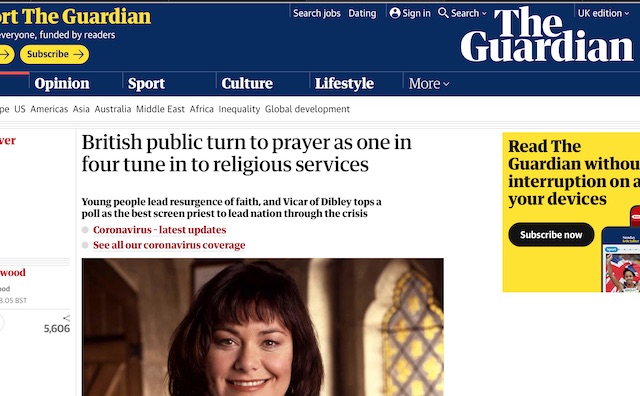 The above claim popped up in the Guardian a few days ago. The claim is that large numbers are turning to prayer. The subtitle under the story claims that there has been a “resurgence of faith”.

Is this actually true?

The opening line is this …

In other words, 75% of the population have not done so.

Given that roughly just under half the population do identify as religious, it is not exactly a revival when you discover that only half of them have tuned into a religious service since the stay at home started.

It then carries on …

and one in 20 have started praying during the crisis, according to a new survey.

Again, in the context of a population that is just under 50% religious, or at least acknowledge that they have a cultural religious inheritance, we have 5% who say that they started praying. Again not exactly a huge religious revival, but rather is perhaps a small subset that would identify as “Christian” or similar and simply put into practise things that they previously they did not.

The Church of England has said that unexpectedly high numbers of people are tuning into online or broadcast services, and 6,000 people phoned a prayer hotline in its first 48 hours of operation. Other faiths have also reported surges in people engaging with online religious activities as places of worship have been closed during the lockdown.

In other words, people who normally go to a religious place of worship are finding online outlets as an alternative. This pattern repeats for everything. Netflix is booming. Demand for online orders for supermarkets has surged beyond demand, water is wet, and the pope is apparently Catholic.

The poll conducted has found no hidden surprises, but rather that things are playing out exactly as expected in a lockdown.

The actual data is a great big nothing burger, there is no revival or surge in faith.

Why Am I writing about this?

My intent is not to have a go at religious people for being religious. The point is this, the headline within the Guardian is grossly deceptive and very misleading. The spin being applied is sufficiently vigorous enough to make an old propeller-driven aircraft jealous.

This is the type of spin one might expect from a tabloid, and so I’m rather surprised to observe the Guardian rolling it out.

The article itself is fine. It reports the details of the poll conducted by Tearfund. To debunk the headline all you need to do is to actually read the article under it.

Be wary of click-bait headlines … even from sources that you generally trust as reliable.