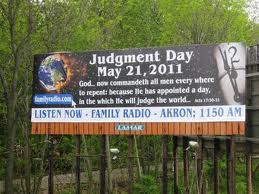 Its official, the clock here in the UK just passed 6pm, and …No rapture!! … except of course on twitter where we have an armageddon of users expressing their mock disappointment at the lack of dead people rising from their graves, but then again perhaps it has been a rather quiet rapture – the type that passes unnoticed. God popped down,  took a quick look around, decided none of us were worth bothering with, was also rather keen to watch Dr Who today (on in 10 minutes if you happen to be in the UK), and so  decided to give it all a miss.

Of all the tweets I’ve seen so far, my favorite just has to be Professor Brian Cox who tweeted … “I think we should all pretend the #rapture is happening so that when Harold Camping gets left behind later today he’ll be livid.“.

OK, serious question, what happens now, will this be a wake up-and-welcome-to-reality call for the “believers”, and can they now begin to apply some serious critical thinking to all the crazy ideas sloshing about inside their heads, or will they dream up some smart excuse and simply carry on as before. I suspect you all know the answer, we have been here before and so past behaviour is very much an indicator of how this will play out. 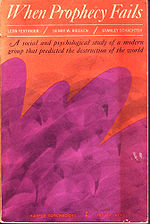 The first attempt to describe how people deal with failed doomsday predictions was described by Leon Festinger and his colleagues in their book, When Prophecy Fails. Here we find the very first published cases of dissonance. In 1954 they got inside access to members of a Michigan cult who believed that there would be a great flood on 21 December, destroying everyone (except the true believers of course). Apparently they were all to be whisked off in a flying saucer. Festinger and his colleagues interviewed cult members before and after the appointed day. Now comes the really surprising discovery they made, instead of abandoning their beliefs when the flood and the flying saucer failed to materialise, most cult members actually consolidated their beliefs and increased their attachment to the group. Festinger explained this in terms of “cognitive dissonance” – the psychological discomfort that people experience when their beliefs come into conflict.

So with this knowledge, and other similar examples, we can indeed see how this will all play out, my guess it that it will be one of these variations …

I must admit, this has in many ways been the very first Internet rapture, and so the message went out far and wide. I’ll be truly be curious to see not only how they will consolidate their beliefs to handle such a public failure, but also if either of the above guesses is on the mark. I would of course wish that some might indeed find that this has been a wake-up call and start to question the utter insanity of it all, but sadly the research available does appear to indicate that is simply not going to happen, and they will just end up digging themselves in even deeper.

As for those of you who had been looking forward to it all, well what can I say except, “Cheer up, it’s not the end of the world.’

Update 24th May: Hey guess what, I just scored a hit, both my options were bang on the mark (does he read my blog). Not only did Harold Camping decide … “May 21 had been “an invisible judgment day,”… but he also explained that he made a maths error, was five months off, and that the world will really end on 21st Oct.

However, the really good news here is that we all get a second post-rapture party opportunity in just a few months. As for Mr Camping, well he is quoted as also saying that the missed prediction had somewhat humbled him. “I’m not a genius,” he said. Yea Harold, no kidding, I think almost everybody on the planet had worked that one out.

1 thought on “No rapture – So what happens now in the minds of the believers?”