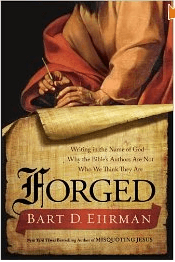 If you are a believer, then you should seriously consider reading a book by Biblical scholar, Bart Erhman. His latest publication “Forged” is a great introduction to the reasons why scholars are persuaded that a significant number of works in the New Testament are not by their purported authors. He also explains why some of the ideas we embrace today do not actually come from the bible at all, but were instead added in later.

As an example, we have a truly crazy idea that many accept as reality. Its the bizarre concept that there is one God that has three different forms, Father, Son and Spirit. We are all familiar with this concept today, it is part of our cultural baggage. However, what really surprised me is that this idea does not exist anywhere in the bible at all … except for one reference in 1 John 5:7-8.


Now what is fascinating, is that if you look at the original Greek text, these  verses are missing, they were  somehow added in the later Latin text, and it became inflated into an important piece of dogma. So important that, when it was noticed that the earlier Greek text lacked it, the Latin was re-translated back into Greek to make it look authentic! It is this forged Greek version that is the basis for the translations that we now have, for example the King James version and the doctrine of the Trinity has become central to Christianity. This is just one example. Bart Ehrman has written a whole book, Forged, on similar forgeries in the bible.

Here is a video of the author explaining the above …

If you are a close minded batshit crazy believing nut who has no interest in reality, then I’d strongly encourage you to avoid this book, and immediately burn any copies you find … on the other hand, if you truly are interested in seeking after the truth, then I’d encourage you to seriously consider reading it. This is not an opinion based anti-bible rant, but is instead a credible piece of work by a well-respected biblical scholar who has himself faced up to the reality – much of what he used to believe is fiction and has been forged.

For interest, here is a review of the book by Dr. James F. McGrath, Clarence L. Goodwin Chair in New Testament Language and Literature at Butler University, Indianapolis. In his review he endorsed this as a good and accurate piece of work …

“Ehrman does a good job of mediating scholarship to a wider public, in an informative and readable style.”

If you are a believer, then you need to read this. I also used to be a believer, but I no longer am, I had to come to terms with reality, this book will help you to take that same journey.