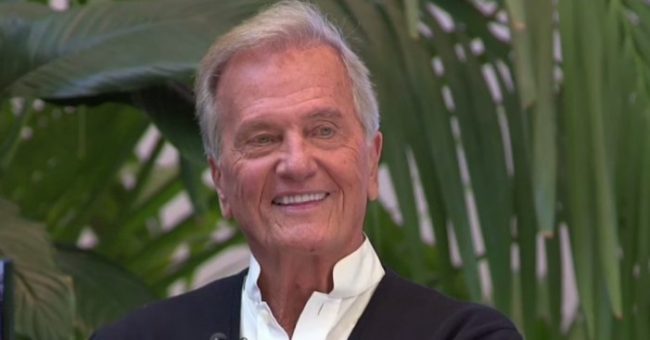 Pat Boone, yes the singer not somebody with a similar name, feels that Saturday night live went too far with a recent parody and he would like to see a blasphemy law put in place to prosecute them for “Blasphemy”.

This happened a few days ago on the April 22, 2016 broadcast of Fox News Radio’s The Alan Colmes Show, and here is that sound bite …

Why would he take this stance?

Well because it is all about a truly daft movie called God’s Not Dead 2 in which he had a role, and it is a parody of that movie that he is upset about.

The move gets 3.1 on IMDB and that is a well-deserved low. It panders to a mythological religious persecution complex, specifically the belief that the most powerful and dominant belief on the planet and in the US is being oppressed. The words “persecution” and “oppressed” are of course code words for “being criticised” for rampant intolerance, anti-science, and homophobia.

The movie itself, if I may quote-mine the professional movie reviewers, is …

God’s not dead, but he might have a stroke if he sees this film. – Jesús Chavarria, Cine Premiere

God’s Not Dead 2 isn’t interested in a balanced discussion, and instead plays out in a tedious, cheesy, and frankly infuriating manner. – Greg Wakeman, CinemaBlend.com

So woefully misguided, so self-aggrandizing, that it becomes the antithesis of the values of the man it wishes to defend. – Daniel Gelb, AllMovie

“God’s Not Dead 2” is filled with a sense of paranoiac persecution and seething resentment towards secular public schools, the ACLU, government interference and those who don’t care for “Duck Dynasty.” – Sheila O’Malley, RogerEbert.com

In other words, this movie is so bad and so crammed full of sturdy-packaging-material characters (cardboard) that it was screaming out very loudly and begging for a parody to be done, and so Saturday Night Live delivered …

Oh and don’t forget to thank Mr Boone for tipping us off about the parody, if he had not been demanding the deployment of a Blasphemy law against it, then we might never have noticed it.