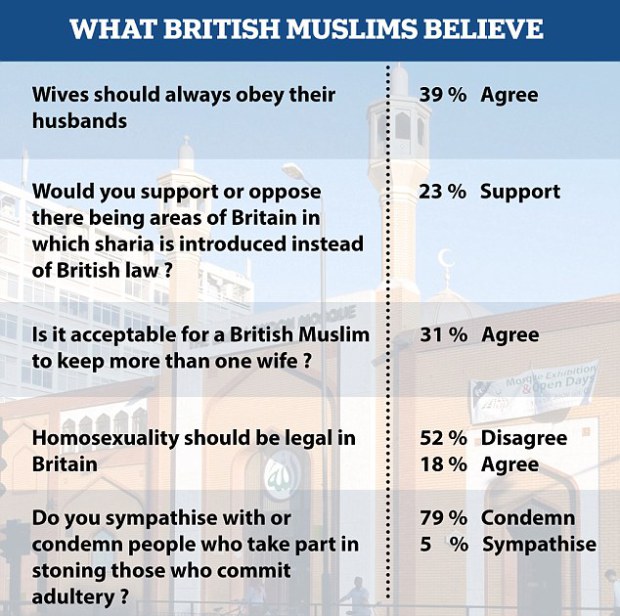 Channel 4 recently aired a programme that was designed to reflect the results of a comprehensive survey that they commissioned, and as might be expected, there have been complaints. It is perhaps inevitable because some are permanently ready to be offended if a specific belief garners any form of criticism, and labels are soon rapidly deployed that suggest some sort of racism is in play.

Let’s step back first and take a peek at the actual survey itself and what it discovered.

What I’m doing here is completely ignoring Channel 4 and any associated media stories and instead I am focusing on what the raw survey results actually tell us.

You can find the full survey here. (or to be a tad more precise, the actual PDF is here, and their methodology is documented here)

The survey consists of the answers provided via face-to-face at-home interviews conducted with a representative sample of 1,000 Muslims across the UK between 25 April and 31 May 2015.

How did they pick people?

What did they learn?

What following below has been distilled directly from the full survey.

As a citizen of the UK

[Side Note: It has been my personal observation that there is no consensus on what the term ‘Sharia’ means, and in reality it means rather a lot of quite different things that is determined by the specific type of Islam that is embraced, and remember just like Christianity, then is a vast diversity of belief]

Should anybody have the right to publish pictures of Mohammed (Q25)

Should Muslims do more to combat extremism? (Q39)

People should be free to believe whatever they wish and to dress however they please, and just as you would object to somebody telling you what to think or how to dress, so also would anybody else, and that includes this community.

If you examined any slice of society then you would find disturbing aspects, things that you do not agree with. Yes, it is rather disturbing that as many as 52% felt that being gay should not be permitted, and if empowered to do so then I suspect they would strive to ban it, and yes these same people would strongly object to anybody who attempted to interfere in their lives to the same degree – but bad ideas do also need to be robustly challenged.

In general it is actually quite a good reflection overall, and clearly the vast majority are not, as some might have you believe, complete lunatics, but are in fact no different than anybody else is, in that they wish no real harm to anybody, and are as horrified by ISIS as you are, and yes they do have extremists lurking amongst them who seek to do real harm, but so also do other factions of society (for example the racism that is endemic within the far right of politics), and so yes we do need to come to terms with that and not isolate them all because of that, but rather stand with them in unity against such extremism just as we would for any other strata of society.

One big surprise – It is rather interesting that of those surveyed, 1 out of every 5 is not actually religious at all and are simply cultural Muslims. (Q46) so when you think of a Muslim community, do not think about individuals who are fanatically religious, because it turns out that 20% are not religious at all, they are instead cultural. Additionally, do not think about them as a group that is represented by the Muslim council of Britain because once again … big surprise … the majority (51%) reject the very idea that the council represents them or their specific views. As for where they feel they belong, 90% of them felt that the UK was home – this is not about “them” and instead they are part of us, part of our story, and without them we are incomplete.