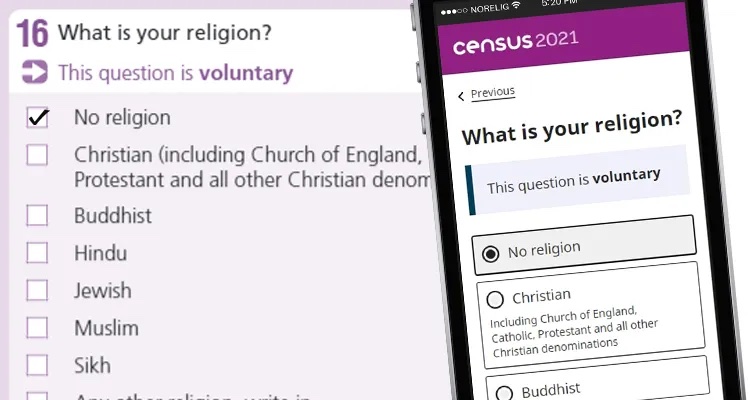 In the UK a census is run every ten years and the latest one is scheduled for Sunday March 21. Rather obviously, you complete details relating to who is in the property on that day.

One of the questions involves asking you what your religion is. That specific question is not mandatory, so you can simply ignore it.

Personally, I will be completing it, because answering it does matter.

How do the none religious respond to it?

What has been happening here in the UK, and also in other nations running their census, is that some non-religious people use this as an opportunity to have a bit of a laugh and so they have been ticking the “Other” option on the bottom of the form and identifying themselves as something weird.

Census Jedi Knights and Others

Ten years ago in the 2011 census, we got this selection of religious “beliefs” …

Side note, if you are wondering how many simply ignored this optional question back in 2011, the answer is that about 7% did.

So why am I writing about this?

The census is not a poll, but instead is the gathering of information so that decisions can be made.

If the data they have is rubbish, then rather obviously the decisions made will not exactly be to your liking.

They use the data to make choices such as the type of school to open, or what sort of emotional support to offer people in hospitals.

When the non-religious identify as religious, such as “Jedi” then that simply registers as “religious” so funding goes to run a school with a religious ethos. Ditto hospital emotional support.

Humanists UK has some good illustrations

Exaggerated religion figures have meant time and money gets spent on maintaining unfair religious discrimination in our society. Over the last decade this has included:

Conversely, if the non-religious are more accurately counted it will encourage:

Read more in-depth information about how the use of a leading Census question disadvantages the non-religious.

The wording of the question itself is seriously flawed.

What can also happen is that there are many people who have a cultural religious identify, so they interpret that question as a way of identifying their cultural background.

There are also some who would attend a religious ceremony at key moments – basically three times in their entire life – birth, marriage, and death (hatching, matching, and dispatching). They are not religious, they don’t practise the beliefs, and so the reality is that it is cultural only. These people tick the culture they identify with and so get counted as religious, yet the truth, the stark reality, is that the majority of the UK population are not religious.

It is all deeply ironic.

A population that is mostly secular has a head of state, the Queen, that is the official head of the Church of England, and also 26 unelected Bishops in the house of Lords whose only criteria for being there is that they sincerely believe that their imaginary friend is real.

If you’re not religious, please, say so!

Anything else will skew the numbers used to make decisions.