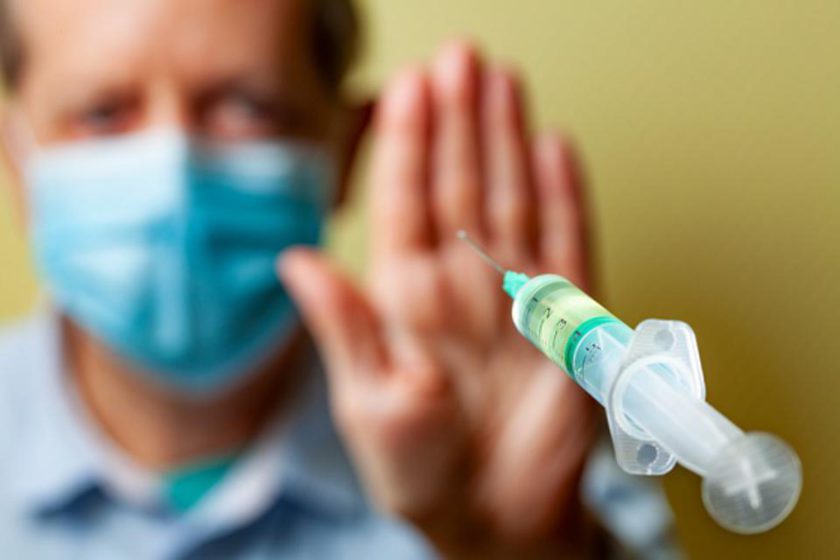 Roughly about a week ago a national poll was conducted for NPR/PBS by Marist. The results are everything you might anticipate. Headlines from it grant us insights into public opinion of the COVID-19 Relief Package and also the current Biden approval rating. Related to all of that were opinions of the state of the vaccine rollout and what other priorities those polled might have. One issue asked highlighted Vaccine Hesitancy. So which demographic, when offered a vaccine, is saying “nope”.

Here is the overall summary …

The specific question asked was this – If a vaccine for the coronavirus is made available to you, will you choose to be vaccinated or not? If you have already received the vaccine, please say so.

The correct response to that is perhaps some variation of “WTF!”.

We are in the middle of a pandemic. COVID-19 kills. We have a vaccine that has been scientifically proven to be effective, and large numbers of people plan to say “Nope, not for me”.

It also appears to be a very partisan stance.

How big a sample was this poll?

We need to wonder if this was simply one odd poll.

What Do other Polls say?

They are finding the same trend.

A CNN poll found 57 percent of Republican men said they wouldn’t take the vaccine. In early March, a Pew Research Center poll found Democrats were 27 percentage points more likely to say they planned to get or had already gotten vaccinated.

Implications of this Vaccine Hesitancy

It might indeed be tempting to say “F*** them, let them die“, but the rather obvious reality is that it is not just about them, it is about all of us.

As long as a human reservoir remains for COVID-19, then it will persist, mutate into variations that the current vaccines can’t handle, and spread.

It is in some ways akin to a good percentage of the population deciding, “F*** all these highway rules, I’m going to drive on the left of the freeway … at night … with no lights … at 100mph”.

What could possibly go wrong with that stance.

People do have the right to refuse treatment. Any attempt to impose any treatment goes against basic medical ethics.

I’ve had COVID, so I’ll be fine

Some might argue that having had it already they don’t need the vaccine and so they will be fine.

The official CDC guidance is that the vaccine provides better protection. One huge unknown is how long immunity from having had the disease lasts. This line of argument is quite literally a bet with your own life that you will be fine on the basis of no good evidence at all.

Will it really pan out this way?

What people say they intend to do in a poll is often not what they actually do. It is distinctly possible that when offered the vaccine, many will quietly get it.

Both Trump and also Melania might have refused to participate in the 2021 public service announcement that included former Presidents Barack Obama, George W. Bush, Bill Clinton and Jimmy Carter. However, they have both personally had the vaccine last January, they simply kept very quiet about that. Trump’s refusal to make a public endorsement has turned it into a political issue. Dr. Anthony Fauci has, when asked, advised that public advocacy from Trump on behalf of taking the vaccine “would make all the difference in the world.”. The fact that Trump refuses to do this is having serious consequences.

What happens if we get to the position where all those that want a vaccine have now received it and too many have refused it to enable us to eradicate it or at least control it?

Should vaccines be mandated?

We simply can’t do that, it goes against basic medical ethics.

The rather stark truth is that we are rapidly hurtling towards such a decision point.

How this may play out, and this is not a suggestion, but instead is simply a guess, is that it will be the insurance companies that will in the end win the day and save us all.

When you operate a business you generally have to carry insurance against potential risks. This is similar to driving. You need insurance. If you have an accident that results in damage to property or people, your insurance coverage handles that. In a similar way if you run an airline or put on a concert or a game within an arena, you carry insurance. Having unvaccinated people in the mix brings considerable risk and so it may become a standard clause that those that attend should present the organisers with a vaccine passport … or … to opt out of doing that, the organisers may find their policy to be very very expensive.

Net effect, if you want to fly, or attend a public event, work in a public facing role, or even eat out, you may find that you can’t unless you have a valid medical reason for an exception or a current vaccine passport. That might in the end nudge the hesitant to rethink. There would still of course be many who hold out, but a nudge like this might get us over the line.

I also suspect that many other nations may take a strong stance against inbound international travellers. Either you present a vaccine certificate or you go into a mandatory quarantine for two weeks at your own expense.

Side note: Vaccine Hesitancy is not a distinctly US centric issue. Most other nations will most probably need to contend with this.