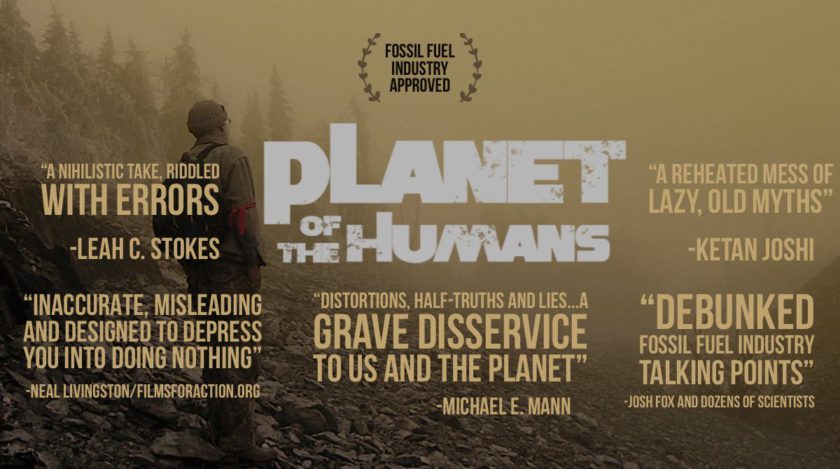 Michael Moore’s new movie “Planet of the Humans” is a mire of distortions, misinformation, and climate denial. I like much of what Michael Moore produces, but not this one. That is not simply because it presents information I do not agree with, but rather because it is really is peddling ideas that are not factual.

What Does Wikipedia say?

When a movie is released, it is now common practise to pop up a Wikipedia page telling you all about it and how well received the movie has been. In this instance … well I’ll let you read it yourself, here are a few snippets …

In a letter, filmmaker Josh Fox and academics including climate scientist Michael Mann, affirm that the film includes “various distortions, half-truths and lies”, and that the filmmakers “have done a grave disservice to us and the planet by promoting climate change inactivist tropes and talking points”; [19] they asked for an apology and a retractation of the film.

Environmental journalist Emily Atkin described the documentary as “an argumentative essay from a lazy college freshman”.[20]

Greentech Media editor-at-large Eric Wesoff, writing in PV Magazine, a solar-industry trade website, describes the film as a “screed against solar power, wind power, biomass, hydrogen fuel, ethanol, EVs, and a case for the general unsuitability of renewables as a replacement for fossil fuels”. The review notes that “the solar industry [the film] examines, whether through incompetence or venality, is from somewhere back in 2009”.[5]

The Union of Concerned Scientists, which was mentioned in the movie, responded, “it implies that UCS took money from corporations profiting from EVs, without (again) stopping to check the facts, or reaching out to UCS about it. It wouldn’t have been hard, either way, to discover that UCS doesn’t take corporate money at all”.[21]

University of California Professor Leah Strokes at Vox Magazine wrote that the movie undermines the work of young climate activists and that “Throughout, the filmmakers twist basic facts, misleading the public about who is responsible for the climate crisis. We are used to climate science misinformation campaigns from fossil fuel corporations. But from progressive filmmakers?“[22]

Bill McKibben is one of the primary targets within the film. He defends himself very well within a Rolling Stone article by deploying facts, a skill that appears to have completed eluded the filmmakers …

the filmmaker made two basic points. One, that I was a big proponent of biomass energy — that is, burning trees to generate power. Two, that I was a key part of “green capitalism,” trying somehow to profit from selling people on the false promise of solar and wind power

The first has at least a kernel of — not truth, but history. Almost two decades ago, wonderful students at the rural Vermont college where I teach proposed that the oil-burning heat plant be replaced with one that burned woodchips. I thought it was a good idea, and when it finally came to pass in 2009, I spoke at its inauguration. This was not a weird idea — at the time, most environmentalists thought likewise, because as new trees grow back in place of the ones that have been cut, they will soak up the carbon released in the burning. “At that point I would have done the same,” Bill Moomaw, who is one of the most eminent researchers in the field, put it. “Because we hadn’t done the math yet.” But as scientists did begin to do the math, a different truth emerged: Burning trees put a puff of carbon into air now, which is when the climate system is breaking. That this carbon may be sucked up a generation hence is therefore not much help. And as that science emerged, I changed my mind, becoming an outspoken opponent of biomass. (Something else happened too: the efficiency of solar and wind power soared, meaning there was ever less need to burn anything. The film’s attacks on renewable energy are antique, dating from a decade ago, when a solar panel cost 10 times what it does today; engineers have since done their job, making renewable energy the cheapest way to generate power on our planet.)

His defence for point 2 …

As for the second charge, it’s simply a lie — indeed, it’s the kind of breathtaking black-is-white lie that’s come to characterize our public life at least since Vietnam veteran John Kerry was accused by the right wing of committing treason. I have never taken a penny from green energy companies or mutual funds or anyone else with a role in these fights. I’ve never been paid by environmental groups either, not even 350.org, which I founded and which I’ve given all I have to give. I’ve written books and given endless talks challenging the prevailing ideas about economic growth, and I’ve run campaigns designed entirely to cut consumption.

Let me speak as plainly as I know how. When it comes to me, it’s not that Planet of the Humans overstates the case, or gets it partly wrong, or opens an argument worth having: it is a sewer. I’ll finish with just the smallest example: In the credits, it defensively claims that I began opposing biomass only last year, in response to news of this film. In fact, as we wrote the filmmakers on numerous occasions, I’ve been on the record about the topic for years. Here, for instance, is a piece from 2016 with the not very subtle title “Burning Trees for Electricity Is a Bad Idea.” Please read it. When you do, you will see that the filmmakers didn’t just engage in bad journalism (though they surely did), they acted in bad faith. They didn’t just behave dishonestly (though they surely did), they behaved dishonorably. I’m aware that in our current salty era those words may sound mild, but in my lexicon they are the strongest possible epithets.

That is very damming stuff. There is no room here for misunderstanding. What we are dealing with is very deliberate dishonesty.

There is a great deal more fact-based criticism

You don’t have look too hard to find it. Many many sources lay out the facts and cite evidence that conflicts with the movie.

Inside Climate News covers it and lays out the facts – Inside Clean Energy: 6 Things Michael Moore’s ‘Planet of the Humans’ Gets Wrong – “The documentary’s “facts” are deceptive and misleading, not to mention way out of date“.

Unlike the bland assertions trotted out by the movie, Inside Clime News cites reliable sources for their rebuttal.

Here are their 6 points of rebuttal …

Are EVs Just as Polluting as Gasoline Vehicles?

…The film is recycling an old argument: that the use of fossil electricity means electric vehicles have about the same emissions as gasoline vehicles. But researchers have looked closely at this and found that there is a clear emissions benefit of using an EV.

For example, the Union of Concerned Scientists has found that EVs have lower emissions—including emissions from generating electricity—than typical gasoline models, even in the parts of the United States that still rely the most heavily on fossil fuels for electric power….

Do Solar Panels Only Last 10 Years?

Planet of the Humans shows an unidentified man at a solar trade show who says, “Some solar panels are built to last only 10 years, so it’s not as if you get this magic free energy.”

The National Renewable Energy Laboratory has done extensive work to determine how much solar panels degrade over time. Researchers there have found a median degradation rate of 0.5 percent per year, which means a median panel is still producing at 90 percent of its capability after 20 years.

Most solar systems come with warranties of at least 20 years.

How Much Wind and Solar Does Germany Generate?

As you can see from my story published today about the German energy transition, this is a subject I’ve followed closely, and I knew something was awry with the film’s statistics.

The filmmakers appear to be using percentages that include energy used for home heating and transportation to arrive at such low numbers for wind and solar, without making clear that this is what they’re doing. It is, at best, misleading.

Germany’s success in developing renewable energy and maintaining a reliable grid is a compelling counterpoint to much of what the film is arguing.

Do Solar and Wind Energy Components Have a Carbon Footprint as Large as Fossil Fuels?

There is a deep body of research showing that wind, solar and nuclear power have much lower life-cycle emissions than natural gas and coal.

One example is a 2017 paper published in the journal Nature Energy that showed very small carbon footprints for wind, solar and nuclear, while coal and natural gas power plants had much larger carbon footprints, even if they were using carbon capture equipment to store their emissions. Carbon Brief wrote about this research at the time.

Tesla’s Factories Generate 100 Percent of Their Own Electricity. So Why Are They Connected to the Grid?

…There are many reasons that a building needs to be connected to the grid even if it has access to its own electricity sources. First, the power lines can be used to export any excess electricity. Second, the grid is available as a backup whenever needed…

Do the Environmental Concerns about Biomass Energy Mean that All Renewable Energy is Suspect?

The short answer is an emphatic “No,” but there’s a longer answer that gets to the heart of one of the film’s biggest shortcomings.

The film spends much of its time criticizing energy systems that use biomass, including those that use wood chips to make electricity or corn to make ethanol for motor fuel.

There are some well-documented concerns with using biomass in terms of land use to produce feedstocks, and emissions related to the burning of the fuels. Many environmental advocacy groups do not support the expansion of biomass energy systems, and see a clear difference between biomass and other renewable technologies like wind and solar.

But by lumping together biomass with wind and solar in an argument about renewable energy, the film is oversimplifying. …

There is much much more fact-based criticism floating about.

For example these are particularly insightful pieces:

Planet of the Humans – Further Reading

Planet of the Humans – Tweets

1 thought on “Planet of the Humans – A reheated mess of lazy, old myths”