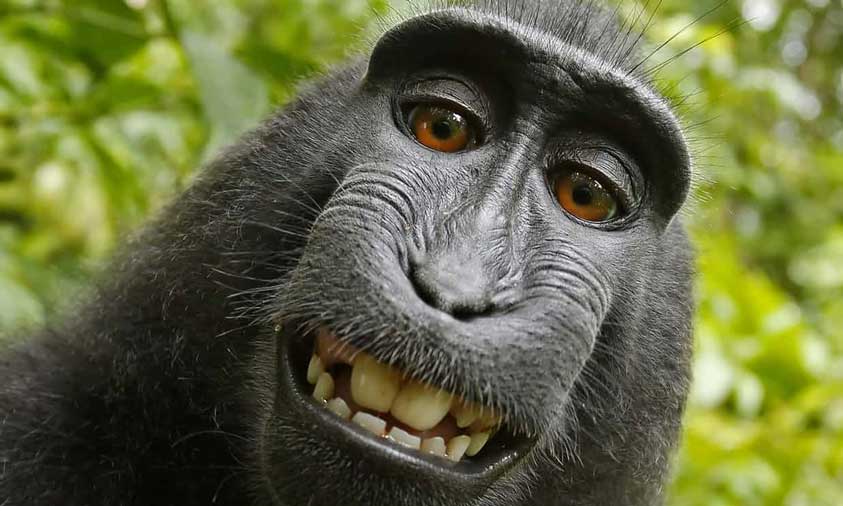 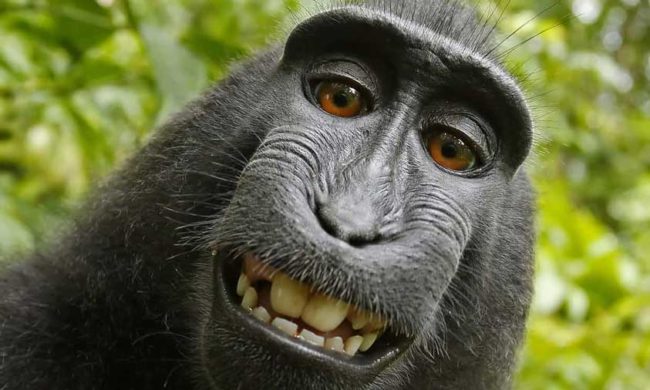 Back in 2011 photographer David Slater was in the Indonesian jungle and had setup his camera. A rather playful troop of crested macaque monkeys that he had befriended starting larking about with his camera, and soon one ended up taking the above monkey selfie.

Now here is the key question. Who owns the copyright to that picture?

To help you out here a bit, it is perhaps worth pointing out that the setup for the selfie was not accidental, but was instead quite deliberate. Mr Slater, a wildlife photographer, had a specific goal to engineer things so that he could get the selfie …

He does, I believe, have a good case for claiming copyright and that the selfie was his creation. Remember that he had worked for days to earn the trust of the troop and then created the selfie setup. 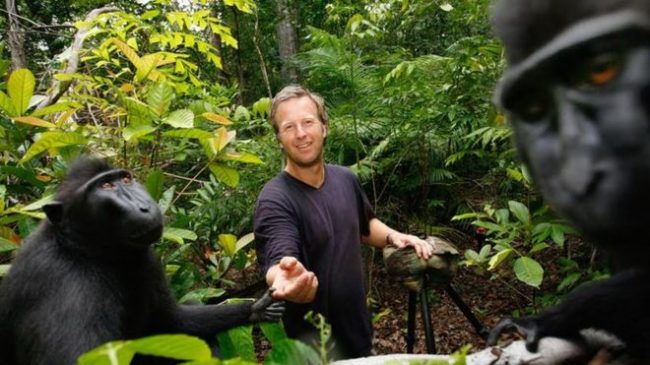 The Monkey Selfie goes to court

The initial case was in 2014 and was a dispute between Mr Slater and Wikimedia. The Wikimedia stance was that there was no copyright holder because copyright can’t be assigned to a non-human, hence they have the image available in the public domain in wikimedia. This is how that panned out …

In December 2014, the United States Copyright Office stated that works created by a non-human, such as a photograph taken by a monkey, are not copyrightable. A number of legal experts in the US and UK have nevertheless argued that Slater’s role in the process that led to the pictures being taken may have been sufficient to establish a valid copyright claim, stating that this is a decision that would have to be made by a court

What happened next in Sep 2015 is that PETA brought a case on behalf of Naruto, the crested macaque that took the selfie …

London – The US Copyright Act grants copyright ownership of a “selfie” to the “author” of the photograph – and there’s nothing in the law that limits such ownership on the basis of species. That’s why PETA US filed a lawsuit this morning asking the US federal court in San Francisco to declare Naruto – a 6-year-old free male crested macaque living in Indonesia – as the author and owner of the internationally famous “monkey selfie” photographs that he took sometime in or around 2011.

The defendants in the lawsuit are professional British wildlife photographer David J Slater and his company, Wildlife Personalities Ltd, who both claim copyright ownership of the photographs that Naruto indisputably took. Also named as a defendant is the San Francisco–based publishing company Blurb, Inc., which published a collection of Slater’s photographs, including two of the selfies authored by Naruto.

The complaint seeks monetary damages as well as an injunction barring the sale or publication of the photographs. PETA US, as “next friend” to Naruto, seeks the court’s permission to manage the copyright in the photos, to license them for commercial use, and to use 100 per cent of the proceeds for the benefit of Naruto and his community, without compensation.

“If PETA US prevails in this lawsuit, it will be the first time that a non-human animal is declared the owner of property, rather than being declared a piece of property himself or herself”

So how did that work out?

The latest update is that after two years the case has now been settled out of court. Peta and Mr Slater issued the following joint statement a few days ago …

PETA’s appeal of the case on Naruto’s behalf is being dismissed, and Slater has agreed to donate 25 percent of any future gross revenue that he derives from using or selling any or all of the monkey selfies to registered charities dedicated to protecting the welfare or habitat of Naruto and other crested macaques in Indonesia.

The following statement is a response from general counsel to PETA Jeff Kerr:

PETA’s groundbreaking case sparked a massive international discussion about the need to extend fundamental rights to animals for their own sake, not in relation to how they can be exploited by humans. Thanks to this settlement, sales of the photographs that Naruto indisputably took will help protect and support him, his community of macaques, and their Indonesian home.

And this is a joint statement between PETA and Slater:

PETA and David Slater agree that this case raises important, cutting-edge issues about expanding legal rights for non-human animals, a goal that they both support, and they will continue their respective work to achieve this goal. As we learn more about Naruto, his community of macaques, and all other animals, we must recognize appropriate fundamental legal rights for them as our fellow global occupants and members of their own nations who want only to live their lives and be with their families. To further these goals, David Slater will donate 25% of future gross revenue from the Monkey Selfie photographs to charitable organizations dedicated to protecting and improving the welfare and habitat of Naruto and crested black macaques in Indonesia.

A few more updates on the Monkey Selfie

The image still sits there on Wikimedia. I can only speculate that 25% of nothing is not a huge sum of money.

One other twist is that while the case was brought on behalf of one specific female crested macaque named Naruto, Mr Slater has maintained that they got the wrong one and that the selfie was not taken by the female Naruto at all, but by another male.

As for the ultimate outcome, it financially ruined Mr Slater. A Telegraph article last July has some further insights …

The 52-year-old from south Wales, who specialises in wildlife and conservation photography, said he has been left penniless after years of legal wrangling over whether he or the macaque owns the copyright of the picture.

Mr Slater, who couldn’t even afford a flight to America to be at the court hearing on Thursday, said that he is considering giving up his career as a photographer, and becoming a tennis coach or a dog-walker instead.

“This would be a new venture for me. It would pay peanuts, but at least it would be more than photography,” Mr Slater told The Telegraph.

“I am just not motivated to go out and take photos any more. I’ve had outlays of several thousand pounds for lawyers, it is losing me income and getting me so depressed. When I think about the whole situation I really don’t think it’s worth it.”

… but that same article is not all negative, because something very positive also arose from all this …

In spite of everything, Mr Slater said he does not regret taking the picture of the monkey. On the contrary, he said he is “absolutely delighted”.

“It has taken six years for my original intention to come true which was to highlight the plight of the monkeys and bring it to the world,” he said.

“No one had heard of these monkeys six years ago, they were down to the last thousands.”

He said that thanks to the publicity that his “monkey selfie” attracted, impoverished locals no longer shoot or eat macaques because “The locals used to roast them, but now they love them, they call it the ‘selfie monkey’,” he said.

“Tourists are now visiting and people see there is a longer-term benefit to the community than just shooting a monkey.”

One last observation – I strongly suspect that David Slater might in fact be the first person in human history to be sued by an animal.

But perhaps we shall end with a picture of one of the other crested macaques in the troop who can now benefit from 25% of the proceeds of sales for the selfie. I wonder how they will spend it. 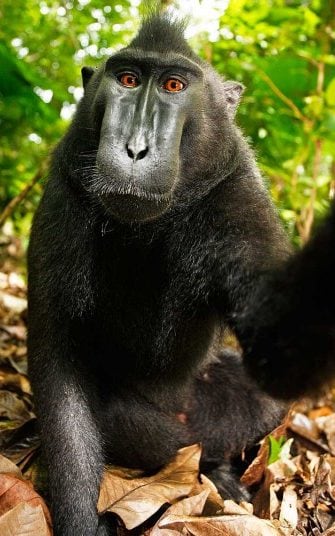