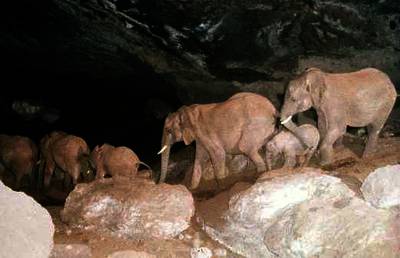 The title might suggest that this is a satire piece, but it is not and is instead the literal description. It comes via a talk given by Ian Redmond at the Winchester Science festival last Sunday, and so the acronym TIL within the title means “Today I Learned”, but to be a tad more accurate perhaps that should actually be LSIL (Last Sunday I Learned).

Ian is a tropical field biologist and conservationist who is best renowned for his work with gorillas and elephants, also he began his career working with Dian Fossey as an assistant. She inspired him and many others, and so he in turn now does the same.

At one point he was talking about elephants that go underground into caves to mine for salt.

Here is a clip about them …

The description associated with the above explains …

As far as I’m aware the elephants of Mt Elgon in Kenya are the only ones in Africa to venture deep inside caves to get salt. They do it very rarely and there is no predicting when it will happen, so we had to wait for weeks to get this footage. The first time the whole herd entered the cave I was stationed in a hide right at the back of the cave some 150 metres deep. I’ll never forget the sounds they made; there were the deepest rumbles that resonated off the cave walls but also terrifying roars that sounded like they should come from something monstrous and unearthly.
It was incredible how they used their trunks like mine sweepers scanning the ground ahead as they walked in the pitch blackness. There was absolutely no light in the cave and we used infra red lights to illuminate for our cameras, which is invisible to the elephants. I couldn’t believe the lengths these elephants went to to get at the salt locked up in the cave walls and the idea that generations of elephants could have carved out the depth of cave we see today is an amazing thought.

The key to understanding it is perhaps knowing that many animals that eat just plants experience ‘salt hunger’. This happens because their diet does not provide them with the salt they need, hence they are driven to find other sources such as salt licks. On Mount Elgon there are no salt licks so the only source they have is deep at the back of a cave. For thousands of years these elephants have been venturing deep into the blackness of this cave to mine salt to meet this salt craving they experience. It has been speculated that much of the cave itself has been carved out over centuries by successive generations of elephants doing this.

Now that is an amazing surprise to discover.

From that last link …

Following in the footsteps of former colleague Dian Fossey, Ian Redmond hopes to do for the cave elephants of Mount Elgon what Fossey was able to do for the mountain gorillas of Rwanda: by raising the profile of these unique animals he hopes to save them. Redmond assembled the MEEM (Mount Elgon Elephant Monitoring) Team to track the elephants’ movements and protect them from poachers and traps set by bushmeat traders. He has even taught the team the low rumbling language of the elephants to help bring them closer to the elephants and, hopefully, allay the animals’ fear of human contact.

Here is a picture of Ian that I tweeted out during his talk yesterday … picture in your mind a younger David Attenborough with a beard and you can then perhaps grasp a glimpse of the passion that cascades off him. Actually, Ian is the man who introduced Sir David Attenborough to the gorillas in 1978, for the famous BBC ‘Life on Earth’ sequences, and who taught Sigourney Weaver to grunt like a gorilla in 1987, for her award-winning role in the film ‘Gorillas in the Mist’

Ian Redmond talking at #wsf16 about megafauna and why they truly matter pic.twitter.com/QLLADR2sGu

The world we live in is a far better place because of people like Ian.

“I had the privilege of getting to know individual wild animals in the wild… I can truthfully say that some of my best friends are gorillas, and I care passionately about them and the future of all life on Earth.” – Ian Redmond