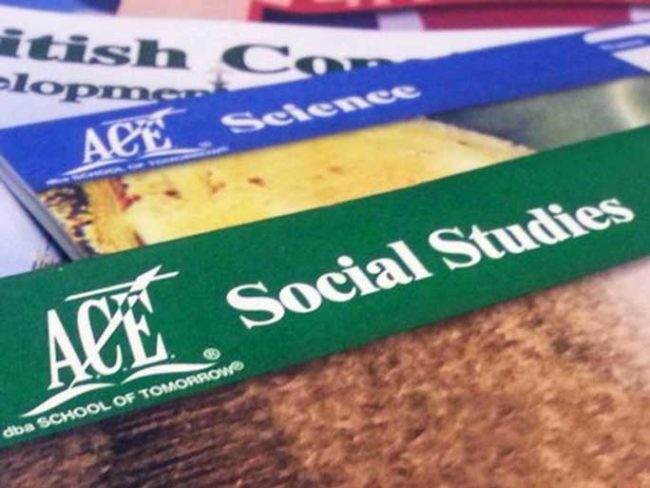 The subject line “Children ‘at risk’ in Christian fundamentalist schools in the UK” might appear to be an anti-religious rant, but this an official warning that has been issued by Ofsted as part of their response to evidence raised by journalists working for the UK’s Independent.

Former pupils reveal homosexuality is being taught as unnatural, while Creationism is favoured over evolution in science lessons

Christian fundamentalist schools are teaching children creationism is fact, that gay people are “unnatural” and that girls must submit to men, according to a series of claims.

Former pupils and whistle-blowers have told The Independent that the schools, which originated in the US but are now dotted around the UK and registered as independent or private schools, teach children at isolated desks separated by “dividers” from other students. It is thought more than a thousand children are being taught at dozens of schools, although little is known about them.

“No one outside the schools knows about what happens inside them, that’s why they’ve been able to go on like this for so long,” a former pupil said.

In September 2016, the Independent ran this story …

Exclusive investigation reveals serious concerns about how children taught at Accelerated Christian Education in the 1980s, 1990s and 2000s were treated, as ex-pupils claim exorcisms were performed on children, pupils were beaten in religious ceremonies and girls were ‘groomed’ for marriage to older men

These are serious charges that simply cannot be discarded by Ofsted (the Office for Standards in Education, Children’s Services and Skills (Ofsted), a non-ministerial department of the UK government, reporting to Parliament via the Department for Education). Nor can they shoot from the hip in reply to every  newspaper story that pops up.

So they did the right thing, they launched their own independent investigation and verified things by gathering facts …

10 ACE schools were visited by Ofsted inspectors in October and nine of the schools have now been downgraded from “good” or “outstanding” to “inadequate” or “requires improvement”. In inspection reports seen by The Independent, the watchdog raises serious concerns about child protection failures, warning they are failing to meet official safeguarding regulations to protect children. A damning report of one of the schools concludes that “children are at risk”.

What do we now know?

What exactly is ACE?

The Accelerated Christian Education (ACE) wikipedia page contains rather a lot of information that we should be concerned about. What is perhaps the only impressive thing here is the use of the word “Accelerated”. In this context it can also be seriously argued that it is a gross abuse of that term, especially as a prefix within a phrase that includes the word “Education”.

Here are a few of the criticisms raised against them …

The end result is a consistently poor education …

Having researched comparative performance on the American College Test between public school students from one school and ACE students from another private school in the same geographic area, one college student wrote in her thesis in 2005 that “a significant difference was found between the public school graduates’ scores and the ACE graduates’ scores in all areas of the ACT (English, Math, Reading, and Composite Score), except the area of Science Reasoning. Overall, the ACT scores of the ACE graduates were consistently lower than those of the public school students.”[13]

Their entire methodology is designed to churn out unthinking drones …

D. Flemming and T Hunt in a 1987 article in the education journal Phi Delta Kappa analyzed the ACE curriculum, concluding that “If parents want their children to obtain a very limited and sometimes inaccurate view of the world — one that ignores thinking above the level of rote recall — then the ACE materials do the job very well. The world of the ACE materials is quite a different one from that of scholarship and critical thinking.”[17]

Their teaching material is highly racist …

The ACE curriculum includes controversial content in relation to race. Some content on this topic has been changed. A particular PACE stated,

“Although apartheid appears to allow the unfair treatment of blacks, the system has worked well in South Africa …. Although white businessmen and developers are guilty of some unfair treatment of blacks, they turned South Africa into a modern industrialized nation, which the poor, uneducated blacks couldn’t have accomplished in several more decades. If more blacks were suddenly given control of the nation, its economy and business, as Mandela wished, they could have destroyed what they have waited and worked so hard for.”[18]

In addition, the curriculum has been criticized for its depiction of racially segregated churches and schools.[19]

It also promotes nonsense as science …

Science is presented in the ACE curriculum through the framework of Young Earth Creationism (YEC). For example, in Biology 1099, the existence of the Loch Ness monster is presented as a fact (as a plesiosaur), and used as a proof against the theory of evolution.[20] Textbooks published in Europe removed this reference in July 2013.[21]

Textbooks used in the curriculum assert that abortion is wrong, evolution is false, and homosexuality is a choice. They teach that wives must be subservient to their husbands and that one can avoid AIDS by being abstinent until marriage.[22]

Solar Fusion is a myth …

The ACE curriculum (in “Science 1096”) asserts that solar fusion is a myth, describing it as “an invention of evolution scientists.”[23]

I need not say it, the evidence speaks for itself.

Within our culture there is a prevailing belief that education run by a religious group will deliver both a high calibre education and also one that will instil moral fibre.

If you truly still believe that as I once did then I’d advise reconsidering that thinking as I did. In this specific instance the available and official Ofsted evidence is that the complete opposite is the reality here.

“As someone who survived an ACE education, I feel let down by the inspectors, because the things they are raising in these reports have been happening for decades. For years, Ofsted and the Government have turned a blind eye to miseducation and abuse in religious schools.” – Jonny Scaramanga, former ACE student

“The Government in general, and Ofsted in particular, have been negligent in failing to ensure that students attending ACE schools are appropriately safeguarded, given a sufficient quality of education and prepared emotionally to enter into the adult world. Indeed, in some of these schools, significant failings have been systematically overlooked, and children have been failed for more than 30 years.” – David Waldock, former ACE student

“We recently inspected a number of independent schools that use the Accelerated Christian Education curriculum at the request of the Department for Education and found some of them to be failing to meet the Government’s standards in a number of areas, including safeguarding, leadership and governance, and the quality of the curriculum. In addition, a number of these schools were not promoting British values effectively enough.” – Ofsted statement

“We commissioned these inspections following concerns about these schools, which had previously been rated good by Ofsted. ACE schools, like all other independent schools, are inspected against the new, tougher Independent School Standards. Where independent schools fail to meet the standards they must improve or close.” – Department of Education statement