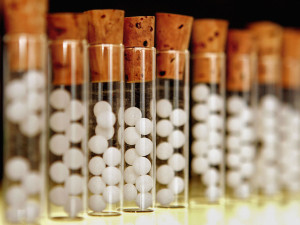 Today’s BBC Big Questions has three – ‘Are the rich paying their fair share?’, ‘Should the NHS fund homeopathy?’ and ‘Are women taking over religion?’

Oh this is easy … “No”, “No”, and “Nobody cares (except a few religious folks)”, ah but getting there will be fun, because as I start to write this prior to the program, I’m anticipating, not being informed or persuaded, but rather entertained. You can always rely upon the BBC to seed the audience with a few nutters just to stir things up. Take for example the occasion a few weeks ago when they debated Humanist weddings, the BBC had arranged for a religious guy to be there to assert that Humanists were evil incarnate and in the grip of Satan.

So out of the three, the question that catches my interest is the second, ‘Should the NHS fund homeopathy?’. Easy, they are just sugar pills that do exactly nothing, so “no” … or to be slightly more vocal … “NO”.

Will I change my mind after watching?

Let’s see, but first, here is the current position.

It may indeed be tempting to consider homeopathic remedies to be a form of herbal medicine, but they are not.

Go to the NHS homeopathy page, and they confirm that it is indeed all total nonsense, and so the official NHS position on its availability is …

Homeopathy is not available on the NHS in all areas of the country, but there are several NHS homeopathic hospitals and some GP practices also offer homeopathic treatment.

Yes, you read that correctly … there are several NHS homeopathic hospitals, now that is a truly scary thought, the idea that an entire hospital is devoted to dispensing quack remedies that do exactly nothing is truly absurd, and luckily many agree …

Professor Sir John Beddington criticised the Government for ignoring his advice against the use of homoeopathic remedies by GPs and NHS run hospitals.

Sir John, who retired as chief scientific adviser to the Government on April 1, expressed frustration that ministers had continued to allow taxpayers money to be used to fund such treatments despite them having “no scientific basis”.

So the issue is this, homeopathy, a quack cure that has no scientific basis, is today available on the NHS in a time when the NHS is under huge funding pressure – that clearly needs to change and be stopped.

As for homeopathy itself, people should still be free to go buy it if they wish, but only by paying for it out of their own pocket, and not by burning badly needed public funds.

On to the #BBCTBQ – how does it play out?

It’s time to roll, so let’s see how much of this comes across.

(Checks audience, do I see anybody I personally know … oh yes I do, this will be good).

First up is a homoeopathic doctor, who is also a “real” doctor, with claim that there is a review that verifies that it really does have an effect … (except if you do a meta-analysis and toss in all the crap flawed studies, you will be able to play games with stats like this).

Evan Harris (yea), explaining that the claims that it really works are complete crap, and that we should not be dispensing sugar pills.

Quack doctor argues that science is flawed … (well yes, but it corrects itself).

Evan is pointing out that it is wholly unethical to dispense treatments that do not work.

Lady arguing that people should have the choice … (and if people choose to have a shaman incant a magic spell, should the NHS fund that?)

My mate Ian from Glasgow Skeptics is up (Yea) .. agrees with Evan.

Evan points out that one side has facts and the other does not.

Claim is that many have benefited from homeopathy … (by placebo).

Yep, Linda does indeed appear to be arguing that magic is just fine (face-palm)

Quack doctor arguing that his sugar pills do no harm … (er well yes, that is because they are sugar pill and don’t do anything at all).

Evan points out that the stuff that this doctor is claiming is wholly unethical.

Folks with Anecdotes chip in with, “well, it worked for me” claims.

Finishes off with lots of people talking over each other.

Sigh … anybody unfamiliar with the facts would not have been informed by any of this, Tom on twitter nails it … 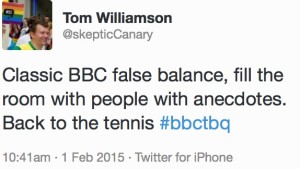 Now here is quote I like that sums this all up.

“I am a cuddly atheist… I am against creationism being taught in schools because there is empirical evidence that it is a silly notion… I am passionately concerned about the rise in pseudo-science; in beliefs in alternative medicine; in creationism. The idea that somehow it is based on logic, on rational arguments, but it’s not. It doesn’t stand up to empirical evidence.

In the same way in medicine, alternative medicines like homeopathy or new age therapies – reiki healing – a lot of people buy into it and it grates against my rationalist view of the world. There is no evidence for it. It is deceitful. It is insidious. I feel passionately about living in a society with a rationalist view of the world.” – Jim Al-Khalili