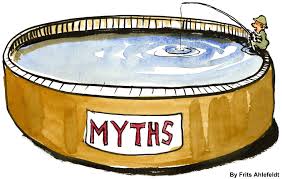 Michael Shermer, an American science writer, historian of science, founder of The Skeptics Society, and Editor in Chief of its magazine Skeptic, has a list of the top ten weirdest things that people truly believe, you can find it here. It is of course a topic he will be familiar with, because not only is he a well-know skeptic who has examined many claims, he is also the author of “Why People Believe Weird Things” so obviously has a vast collection of material to select from.

Now just before we get into the list I should add the obvious, it is not a serious ranking because the term “Weirdest” is wholly subjective, and can never really be something official because there is no way you can objectively measure “weirdest”, and yet he does qualify it and explains that he has ignored fringe beliefs and gone for those that are truly popular … but hey, regardless of how you might slice and dice things, it’s fun, so sit back and enjoy.

His list of 10 is as follows (with my comments under each), his actual list contains lots more quite different detail …

When this topic comes up then one name immediately leaps out, and that is the true high priest of all this – Erich von Däniken. It is an interesting and also rather enticing claim, and yet at the same time the “evidence” he offers turns up to be complete and utter BS, and does not withstand any critical analysis.

I do truly get it, because as a teen I was really into this stuff and had a shelf stacked full of books on all this (yes, I had a copy of Chariots of the Gods? and much more) but in the end I simply grew out of it all.

The belief perhaps persists, thrives, and remains popular today because of the “History” channel series entitled Ancient Aliens. Personally, I find the serious to be a gross abuse of the word “History”.

The Wikipedia page, Ancient astronaut hypothesis, is a nice summary of the entire topic.

If you were ever into #10, then this one will flow naturally from that, and sure enough as a teen I was also deeply into this, subscribed to various UFO magazines, and even built my own UFO detector. I well recall a series within one magazine that claimed to teach you an alien language, and so yes indeed, there was a sucker or two out there buying this stuff, and once upon a time that was me.

Like many other fantastical areas, there are lots of claims, but nothing at all that withstands any real critical analysis.

If curious, you can read all about the topic at length here on Wikipedia.

This one is indeed rather popular amongst the religious, both Christian and Islamic. In essence the claim is that 99.97% of the life-science scientists on the planet today are complete fools for accepting all the evidence, as are all the schools and universities, and a book of ancient religious myths is right, despite the observation that creationism has exactly zero credible evidence.

To make things interesting, there are all sorts of flavours that range from old-earth creationists all the way through to young earth creationists such as Ken Ham who asserts that the entire universe is only 6,000 years old (which basically means that we have trees older than he believes the universe to be).

Wikipedia article on it all is here, and as an additional thought, here is a good basic resource from Berkeley that introduces the topic of Evolution.

This one is in many ways similar to Creationism and often employs similar tactics, but tends to now be very much tied in with those who have a specific antisemitic agenda.

Wikipedia article on it all is here.

Rupert Sheldrake is the father of “Morphic Resonance”, an idea that is deemed to be pseudoscience and rejected due to the lack of any credible evidence for the claim. But of course, since it apparently confirms various weird beliefs, you have many such as Deepak Chopra latching on to it all and running with it as “truth”, and Psychic Sylvia Browne claiming while channelling her spirit guide “Francine” that morphic resonance carries emotional trauma and physical ailments from past lives which may be released through affirmations.

When the peer review that somebody has comes from Deeppak Chopra and Sylvia Brown, then that truly is a big bold red neon sign that announces, “Here be Bullshit”.

You can read all about it here on Wikipedia.

This is perhaps the classic conspiracy theory, the key question being, “Who shot JFK?”. The correct answer is of course Lee Harvey Oswald, and yet we have seen a constant stream of books and movies that have ensured that the various popular conspiracy theories keep on bubbling away.

Despite the lack of any conclusive evidence about 60% of the public buy into the idea that there was a conspiracy.

Wikipedia article on it all is here.

It is, as you might expect, a rather popular idea within the Islamic world to claim that 9/11 was really an inside job and was not down to a group of Islamic fanatics. Despite the fact that Osama bin Laden and Al-Qaeda have officially claimed responsibility, and that none of the 9/11 truth claims withstand any critical analysis, the belief persists, and no doubt will continue to do so.

There is a long Wikipedia article here on the various 9/11 conspiracy claims, and as an additional resource you may find Debunking911 to be of interest.

Ever few years somebody will pop up claiming the end of the world is coming.  You would perhaps be inclined to think that past experience will be an indicator for the next viral end-of-the-world claim, and perhaps it is in many ways, because what the past shows is that some people simply ignore the fact that every single previous prediction has been wrong as they rush to embrace this latest one as correct.

Here is a list of predicted apocalyptic events that never happened.

#2. THE AFTERLIFE AND THE SOUL

It is all perhaps down to our inability to come to terms with our own mortality, and so we comfort ourselves with a belief that there is more. To be 100% clear, so far the actual credible evidence for the reality of an afterlife is exactly zero. Perhaps the best game in town when it comes to such claims would be NDEs, and yet everything that people describe within NDEs can and is simulated.

We might indeed truly wish that our mind was something distinctly different from the physical, but we do now know that if you mess with the human brain, then you end up altering the mind, and thus we have clear decisive evidence that the mind is simply a part of the human brain. To ask, “Where do we go after we die?” is perhaps akin to asking “Where does the flame go when you blow out the candle?”.

“I do not fear death. I had been dead for billions and billions of years before I was born, and had not suffered the slightest inconvenience from it.” – Mark Twain

Well yes, this just has to be Number 1, the idea that there exists a God is indeed perhaps one of the truly weirdest things that humans promote as “true” on the basis of no evidence at all. What is of course fascinating is the observation that the specific variation of god that individuals embrace is the one that generally prevails in the location that they live in, and all other variations are deemed to be wrong, and so the specific variation being promoted tells us a great deal about where somebody comes from and not very much about anything that is actually true at all.

What is also rather interesting is that even within the confines of each specific variation of religious belief, you will find an assurance that god is telling us something, but nobody appears to be able to agree on the precise details.

It might appear to be odd to label this as weird, but give it a moments thought and you will find that it truly is. There are billions of humans who are quite sure that their god belief is “truth”, and yet if asked to provide some evidence for this claim, they have none at all – now that is indeed weird, but perhaps also ever so human as well.

There is a nice one liner that sums this all up. Many might indeed make claims, and are totally convinced that the claim they are presenting you with is pure gold and a deep truth, and yet when examined the “evidence” soon rapidly evaporates, and so it becomes rather clear that the following bumper sticker is indeed a wholly appropriate summary …

Militant Agnostic: I Don’t Know and You Don’t Either.

… and yet despite that rather obvious observation, such beliefs will continue to persist and thrive.