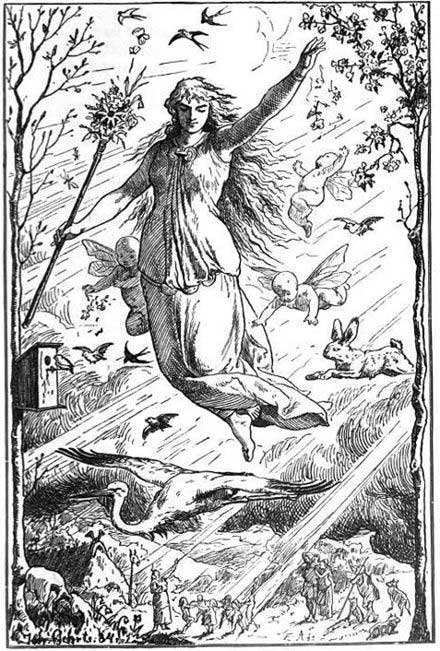 As I’m sure you are aware, atheism is the rejection of the various god claims due to the distinct lack of any evidence, and that is the entire scope of it. There are however some commonly held views expressed by those that do not hold religious beliefs that also lack any evidence and so it is one of these that I’m focusing on today because I was rather guilty of promoting it only a few days ago. It has been pointed out to me by a folklorist that the claim that Easter is named after an ancient goddess named Eostre is not actually true at all.

Easter has just passed, and as part of that I was blogging about it and also suggested that Easter is actually derived from the Anglo-Saxon goddess Ēostre. It is indeed a popular idea that is repeated within many Facebook memes, and so it does the rounds amongst the nones every Easter.

Alas, there is one little problem with this – It’s not factually true and is simply speculation by one monk in 725 – and so I got this quite wrong.

When it comes to historical references to Ēostre, then there is exactly one reference, and it is that reference in its entirety that was resurrected in the 19th century and then vigorously promoted by the Internet in more recent times.

The reference comes from The Reckoning of Time, an Anglo-Saxon text written in 725 CE by the Northumbrian monk Bede. There he explains that the lunar month of Eosturmonath “was named after a goddess… named Eostre, in whose honour feasts were celebrated.” … and that’s it in its entirety, beyond this we have nothing. Here is a modern translation of the latin …

Eosturmonath has a name which is now translated “Paschal month”, and which was once called after a goddess of theirs named Eostre, in whose honour feasts were celebrated in that month. Now they designate that Paschal season by her name, calling the joys of the new rite by the time-honoured name of the old observance.”

The problem here is that there is no evidence that he was correct about this. There are no references or images of Eostre anywhere else or in anything else at all. He also documents Woden and Thor, but they are verified as deities that were worshiped, but not so with Eostre. In fact it appears to be far more probable that the name of the lunar month Eosturmonath  is actually a reference to “the month of opening” for the rather obvious reason that it is springtime.

The revival of the fable of Eostre being the Goddess of Easter was first proposed by Jacob Grimm (yes, the guy who wrote Grimms’ Fairy Tales) in 1835 within his Deutsche Mythologie. That revival is based upon this Bede reference, and from there it has taken on a life of its own.

Yet when it comes to this goddess, we have no images, no carvings and no legends, just this single reference by Bede that appears to be speculation, and so that is why most folklorists will dismiss the assertion that Easter is named after the goddess Eostre as a myth.

If you know of anything that can establish the claim that Easter really is named after an ancient deity named Eostre in a credible academic sense (hint: you can cite reliable sources to verify it), then please do drop a comment, I’m always quite happy to be corrected, because that way I learn something.

The Nones are the folks who have put aside ancient religious mythology and so tend not to roll with the idea that there are gods, but if in putting aside ancient mythology we then replace it with more modern mythology, then are we any better off? I’d instead suggest that we strive to believe as many true things as possible and put aside all myths, even when such fables appear to support our own lack of belief. So when faced with the claim that Easter is named after a mythological ancient deity named Eostre … er no apparently not, because that is itself a modern urban legend.