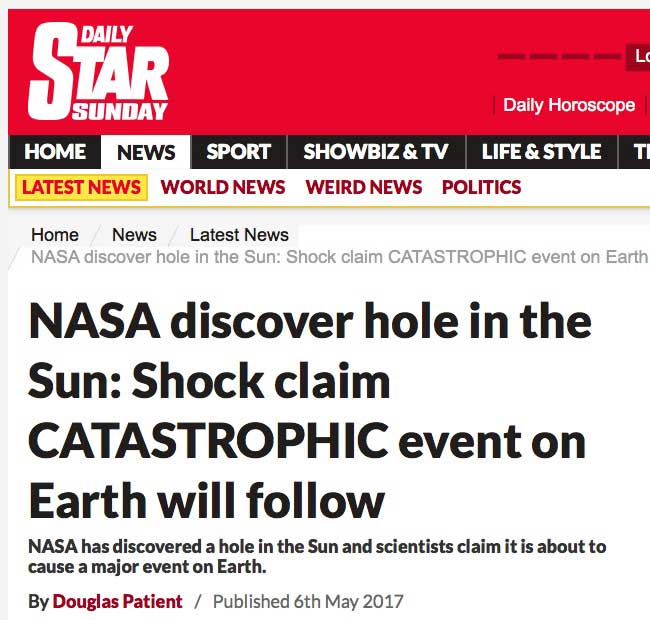 I must admit that sometimes the daily tabloids go so overboard that the pure absurdness of it all becomes quite entertaining. 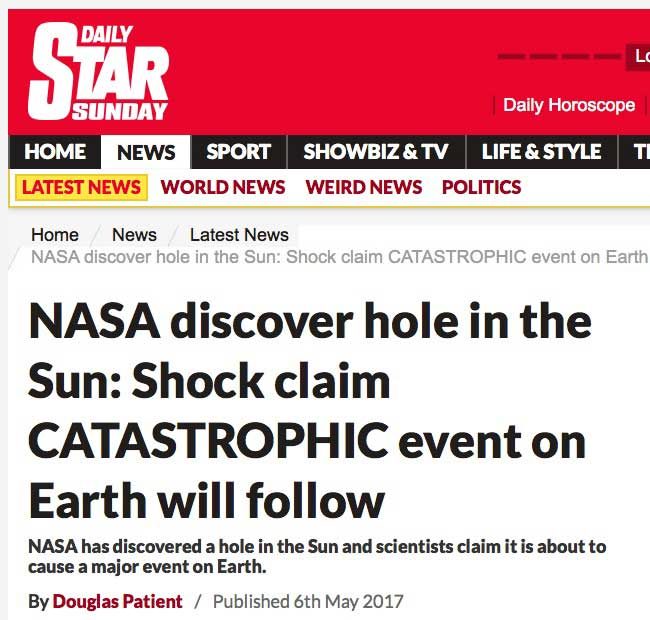 It might indeed be an article about a coronal mass ejection (CME), and so thinking that is what it was, I took a glance. Now this is perhaps the point that the wise amongst you would of course immediately point out “Oh you gullible fool, you got suckered again“.

Yep, you nailed it, and so this is what my dip into the shallow end of the journalistic gene pool revealed … (better switch off your BS detector, I’m about to overload it) …

Solar winds can produce beautiful auroras on Earth, such as the Northern Lights, but scientists claim they have negative effects too.

Writing for Collective Evolution, they believe sharp increases in solar winds may lead to technological disasters on our planet.

Their source for their “Scientists”, Collective Evolution, is a woo-mongering clickbait website, and true to form we rapidly find ourselves wading through a rather deep pool of bovine discharge

scientists believe when holes have been spotted in the past they have coincided with huge global events.

These include great plagues and uprisings.

The boffins claim the Sun change the way we think.

Keep going, and we soon find ourselves far from the shores of reality …

A spokesperson for Collective Evolution said: “There is a mass shift in consciousness taking place on the planet at this time, and we are seeing it take form in a number of different ways — in society, in business, and in ourselves.

“Solar events like this enable us to further evolve and shift our consciousness.

“Although typically these subjects seem taboo or unfounded, they have plenty of merit behind them.

“These subjects that are theorised upon in the consciousness space simply aren’t yet proven by science — although many are now, like how we are in fact energy and that we have an energetic field, also sometimes referred to as an aura.”

… and for a finish, before your very eyes, an astronomical observation is transformed into astrology …

What is the real background story here?

They can’t have just manufactured this out of nothing, so what is the background here about a hole in the sun, what is the real story?

There is in fact a coronal hole, that is not a hole as such, but is actually an area where the Sun’s corona is colder. These come and go all the time, it is nothing weird or unusual. Because the energy levels are lower in such areas, there is a discharge of solar wind that is about twice the normal rate and so what will happen is that we will get an increase in aurora sightings. A rather large example of such a corona is one that was spotted last year.

Essentially, the “doom” we face is an increase in auroras (oh the horror … shudders).

What can also happen is a coronal mass ejection, and while that is something that is a bit more worrying, it is also very rare …

Coronal mass ejections, along with solar flares of other origin, can disrupt radio transmissions and cause damage to satellites and electrical transmission line facilities, resulting in potentially massive and long-lasting power outages.[10][11]

There is in fact something that is truly catastrophic here. If you do read the Daily Star on a regular basis then many of the neurones within your brains will die a slow lingering death due to lack of use.