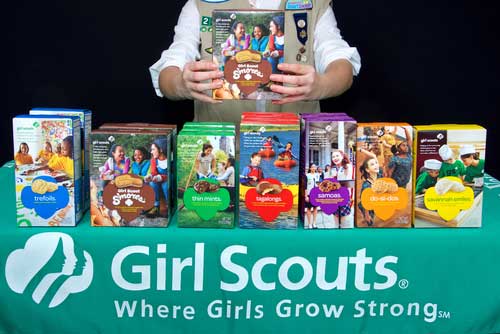 Whenever faced with some utterly absurd claim I do seriously grasp for a thought that runs along the lines of “Nobody could possibly be that stupid“.

Alas, time after time I find many are both quite determined and highly motivated to prove that I am quite wrong about that, and they also are usually quite successful in demonstrating that this is indeed the case.

So what have I got for you from the past week?

The Kansa City Star reports on this one, and I confess that it really does take the biscuit, in this case quite literally …

Saying that Girl Scouts is “no longer a compatible partner in helping us form young women with the virtues and values of the Gospel,” the Archdiocese of Kansas City in Kansas is severing ties with the organization and switching its support to a Christian-based scouting program.

“I have asked the pastors of the Archdiocese to begin the process of transitioning away from the hosting of parish Girl Scout troops and toward the chartering of American Heritage Girls troops,” Archbishop Joseph F. Naumann said in a statement released Monday.

… Girl Scouts has become too liberal and has relationships with organizations that support abortion rights and do not share traditional family values — allegations the Girl Scouts deny.

Naumann also called for an end to Girl Scout cookie sales in the archdiocese.

“No Girl Scout cookie sales should occur in Catholic Schools or on parish property after the 2016-2017 school year,” he said in a letter to priests in January.

The Girl Scouts, which has 1.9 million girl members and 800,000 adult members nationwide, does not take a position or develop materials on human sexuality, birth control or abortion, according to its website. And despite what critics say, the organization says, it does not have a relationship with Planned Parenthood.

What is even stranger is that they only have an issue with the Girl Scouts. Apparently they have no problem with the Boy Scouts.

If there is indeed a concern regarding the welfare and best interests of young children, a far better solution would be to ban Catholic Priests for being anywhere near them. They don’t exactly have all that great a track record. That’s not an unrelated cheap shot …

The man who started this whole controversy is Robert Carlson, the Archbishop of St. Louis. And Carlson is not exactly the guy you want defending the moral authority of the Church.

In 2014, he gave a deposition regarding a priest under his leadership who sexually abused a child in the 1970s. When asked whether he knew at the time if “it was a crime for an adult to engage in sex with a kid,” Carlson’s response was stunning: “I’m not sure whether I knew it was a crime or not”

Bottom Line: The guy who wants to throw the girl guides organisation under the bus is the same guy who was, not all that long ago, unable to work out that sexually abusing children was wrong.

Where else except on the Jim Bakker show will you find a regular stream of religious nuts making utterly absurd claims?

This week his collection included End Times author Joel Richardson and also conspiracy theorist John Guandolo. The context is the news that a group of marchers had organised a protest in which they demanded that Mr T release his tax returns. The panel on Mr Bakker’s show pondered over how such a thing was even possible …

Commenting on the Tax Day protests that urged Trump to release his tax returns, Bakker expressed disbelief that people joined the protests organically: “What’s going on in America where, you know, all these people gather all at the same time in the same place? How can they all gather together? Every city they’re marching, they’re all doing this, who is setting this up?

“In my opinion, when you see the rage of Satan directed against something, that’s usually evidence that God is involved because Satan is enraged in that which God is doing in the earth,” Richardson later added. He claimed that “the Lord is using this administration” and “it’s for that reason that the rage of Satan, this irrational rage of Satan, is so directed towards this man.”

… er no, it is a wholly rational rage of protest against a pussy-grabbing xenophobic lunatic who is attempting to deprive millions of people access to decent health care, roll back basic environmental protection care, and deliver tax breaks to the wealthy.

“The state has an agenda with your children,” he warned. “I realize that this may sound a little bit hyperbolic, it may sound [like] a little bit of an exaggeration—

Side Note: The words “a little bit” in that last part can be quite happily removed …

I don’t think it is, because I think if you begin to see the trajectory of where things have gone and you just draw it out for the next five, six, eight years, you’re going to find this is the agenda.”

“Of course this is the agenda,” he said. “Parents, just get serious about it. Do you want your kids transgendered and communist at 18 years of age? Is that your goal? If it isn’t, then maybe you ought to bring a different vision into the education of your children.”

There’s no special agenda to transform kids into something they’re not. That’s the sort of thing people like Kevin Swanson want to do. Schools aren’t teaching children about the fact that LGBT people exist in order to transform them into being gay or transgender (nor are they teaching them about the Bolshevik Revolution to make them little Communists).

They’re exposing kids to LGBT issues so they don’t act like assholes to the kids who are in that group. Because those kids shouldn’t have to go through school having to deal with a bunch of Kevin Swansons when they’re just trying to figure out that newfangled math.

Do you think Pastor Swanson would flip out if we pointed out that the bible advises us that Eve, as in Adam and Eve, was a transgender clone? That’s what is being taught in his Sunday School as fact.