Yet more complete and utter nonsense is popping up from right-wing religious nuts. The latest claim is that … well here is the rather famous Franklin Graham (yes the son of Billy Graham), promoting the claim that the words “husband” and “wife” are to be banned … 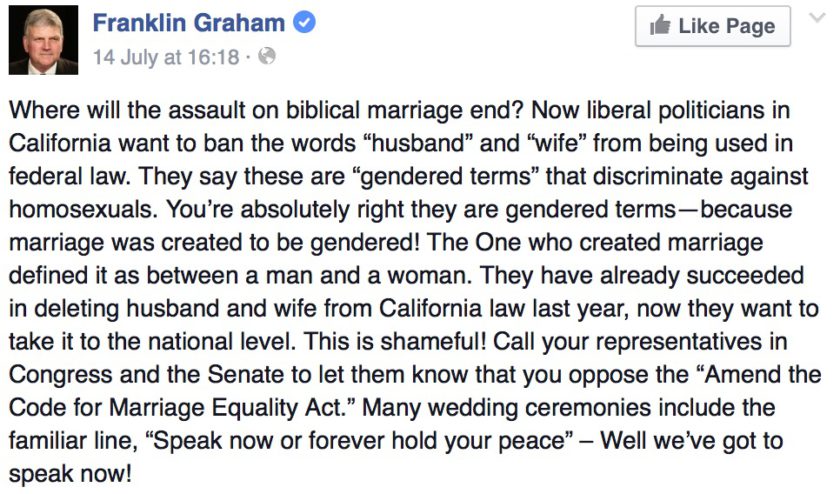 As “proof”, he also links to an article in “The Blaze”, which if you are unfamiliar with that, then let me explain. “The Blaze” is Glenn Becks propaganda portal, and if you have no idea who Glenn Beck is, then let me put it this way, Stephen King describes him as “Satan’s mentally challenged younger brother”, and that is fully warranted because he is a seriously scary guy. So anybody using “The Blaze” as a source for any claim is raising an immediate red flag.

OK, so Franklin Graham promoted a daft claim, why does that matter?

It matters because people listen to him and embrace what he says as “gospel truth” – his FB posting has had 83,000 likes and 33,000 shares – least you wonder, I chose the phrase “gospel truth” carefully, because it basically means that lots of people think it is true but it is not.

There rests the key to all this, the claim is a complete myth.

All it takes is about 30 seconds on google and you quickly discover that this absurd claim has been robustly debunked by snopes.

What is true is that there is a proposed bill to update specific bits of legislation, but that is simply a move to adjust the law to reflect our modern reality. In a nation where same-sex marriage is now recognised, it becomes important to amend the law to reflect that reality and use words such as “spouse” instead of “husband” and “wife”. But beyond that, there is a federal law that makes it a crime to threaten the “wife” of the current president, and obviously that also needs to be amended to reflect the distinct possibility that Hilary might get elected. Nowhere is there any proposal to ban such words, but rather to simply do a bit a practical legal housekeeping.

So yes, Franklin Graham is promoting a myth as fact, but then as a chap whose full time career is “evangelist” and “missionary”, this should not be a surprise because promoting myths as facts is what he has dedicated his entire life to.