Over in New York the news is that a ring of fake psychics has been shutdown. As reported here …

There is no future for a phony psychic network thanks to the federal prosecutors.

Maria Duval and Patrick Guerin, who tout themselves as “internationally acclaimed psychics,” along with Metro Data Management, of Deer Park, N.Y., have signed a consent decree with the Justice Department agreeing to stop the soliciting.

The fraudulent flyers were mailed out in batches of 20,000 to 50,000 pieces of mail at one time in the form of personalized letters, with some 56 million mailings since 2006 in the name of psychics Maria Duval and Patrick Guerin, according to the government’s civil complaint.

Clearly they were simply a ring of con men running a scam that preyed upon the gullibility of people. That however does leave you wondering how to work out if a psychic is quite real, or if it is just somebody running a scam.

How can you ever know?

Are there real Psychics?

There are of course lots of claims, and an abundance of personal anecdotes from people who will advise you that it is indeed all very real, but so far whenever tested using proper scientific controls, nothing has actually been verified … ever.

Clearly rather a lot of people do think that there its something of substance to it all and while some who claim to have psychic gifts are fraudsters, there are others who are quite sincere and are also very confident that they truly do have a gift of some kind.

Putting aside the leap into supernaturalism for a moment, is there a better explanation within our own psychology that explains why people become truly convinced that they are gifted?

Indeed yes there is.

People get caught in a feedback loop where they end up cold-reading or even hot-reading the audience without even realising that they are doing that, and then later are told, “Oh but you were spot on and wholly accurate“, and so they end up not only fooling others, but are also good enough to successfully fool themselves. The more they practise their “gift” then the greater the degree the positive feedback is, and so people can and do successfully ensnare themselves.

Success Stories are not actually successful at all

Big name psychics such as the now deceased Sylvia Browne claim high success rate, and if true then that would indeed be impressive. However, when examined then it soon becomes clear that these claims are not exactly factual …

According to Browne, “my accuracy rate is somewhere between 87 and 90 percent, if I’m recalling correctly.” This article disputes that statistic by examining the criminal cases for which Browne has performed readings. The research demonstrates that in 115 cases (all of the available readings), Browne’s confirmable accuracy was 0 percent.

Yes, you read that number correctly, a zero success rate and I will admit that it is indeed quite impressive to claim such a high success rate when that is the actual success rate.

Underdown knows this firsthand. His team of investigators did an expose of James Van Praagh’s and John Edward’s syndicated TV shows a few years ago.

“We recorded everything in studio and compared it to what aired. They were substantially different in the accuracy. They’re getting rid of the wrong guesses,” Underdown said. “Once you pull back the curtain and see how it’s done, it’s not impressive at all.”

Here in the UK we have Sally Morgan who is rather fond of calling in her lawyers when challenged, and yet when put to the test (without her knowing it), she also falls flat and fails …

Sally Morgan gave a reading to two members of the audience, Drew McAdam and his wife Elizabeth. The reading described a man called Toby who had died in an explosion. However, prior to the show, Drew and his wife say they fed Morgan this information by emailing her website and leaving notes in a box provided in the foyer for so-called “love-letters”. McAdam’s description of the death of “Toby” was taken from a fictional character who died in an explosion in the 1970s BBC drama

So what should you look out for when attending a Psychic show?

The Good Thinking Society have some great guidance available …. 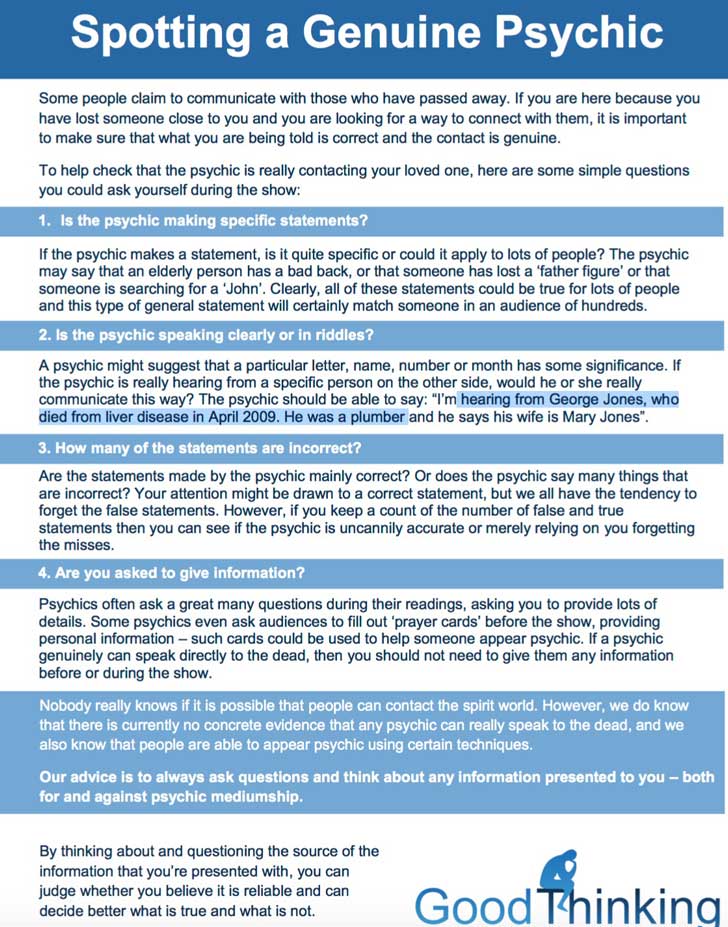 So are psychics real?

So far there is no objective evidence. I will admit that the most impressive one I’ve seen is Derren Brown; he has done some truly amazing things that are clearly supernatural … oh wait, he is not a psychic and clearly states that he is an illusionist.

Let’s finish with James Randi, the retired magician, explaining at his TED talk, about how so many are just running a scam in order to fool you. He should of course know since he spent his entire life as a magician and is well versed in how to completely fool large audiences into thinking that something amazing is going on.