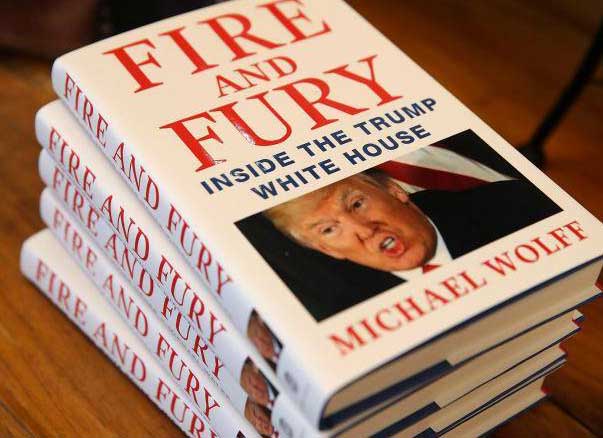 As you are no doubt aware, Michael Wolf’s book, Fire and Fury, has resulted in a lawyer representing Mr Trump sending him a “Cease and Desist” letter  on 4th Jan..

Mr. Trump, according to the letter, demands that publication of the book immediately cease, along with the publication of any excerpts or summaries. The letter also insists that a “full and complete retraction” be issued, along with an apology to Mr. Trump.

The letter also demands a full electronic copy of the book “in searchable form” be given to Mr. Trump’s lawyers.

If Mr Trump’s lawyers wish to actually read the book, then they should buy it on Kindle like everybody else.

A formal response has now been sent back, and looking at it I can only muse that it must have been a joy and delight to his lawyers to have actually written this.

The full text of the letter is available here.

It opens as follows (emphases in mine) …

I write as counsel to Henry Holt and Company, Inc. (“Henry Holt”) and Mr Michael Wolff in response to your letter dated January 4, 2018, concerning your client, President Donald J. Trump. Without identifying a single false statement, your letter broadly challenges Mr Wolff’s book titled Fire and Fury: Inside the Trump White House published Friday, and an excerpt from the book published in a January 3, 2018 New York magazine article, as containing “false/baseless statement” about President Trump that give rise to a host of legal claims. As a result, your demand that my clients cease publication of the book and “issue a full and complete retraction and apology.” My clients do not intend to cease publication, no such retraction will occur, and no apology is warranted.

As President Trump knows, Mr. Wolff was permitted extraordinary access to the Trump administration and campaign from May 2016 to this past October, and he conducted more than 200 interviews with President Trump, most members of his senior staff, and with many people they in turn talked to. These interviews served as the basis for the reporting in Mr Wolff’s book. We have no reason to doubt – and your letter provides no reason to change this conclusion – that Mr. Wolff’s book is an accurate report on events of vital public importance. Mr. Trump is the President of the United State, with the “bully pulpit” at his disposal. To the extent he disputes any statement in the book, he has the largest platform in the world to challenge it. Generalized and abstract threats of libel do not provide any basis for President Trump’s demand that Henry Holt and Mr. Wolff withdraw the book from public discourse. Though your letter provides a basic summary of New York libel law, tellingly, it stops short of identifying a single statement in the book that is factually false or defamatory. Instead, the letter appears to be designed to silence legitimate criticism. This is the antithesis of an actionable libel claim.

Lastly, the majority of your letter — indeed, seven full pages — is devoted to instructing Henry Holt and Mr. Wolff in meticulous detail about their obligations to preserve documents that relate in any way to the book, the article, President Trump, his family members, their businesses, and his Presidential campaign. While my clients do not adopt or subscribe to your description of their legal obligations, Henry Holt and Mr. Wolff will comply with any and all document preservation obligations that the law imposes upon them. At the same time, we must remind you that President Trump, in his personal and government capacity, must comply with the same legal obligations regarding himself, his family, their businesses, the Trump campaign, and his administration, and must ensure all appropriate measures to preserve such documents are in place… Should you pursue litigation against Henry Holt or Mr. Wolff, we are quite confident that documents related to the contents of the book in the possession of President Trump, his family members, his businesses, his campaign, and his administration will prove particularly relevant to our defense.

As I read the above, I am perhaps in some respects reminded of a rather famous rebuttal by a lawyer that dates back to 1971.

The back story here is that Private Eye had published a reference to a Mr James Arkell, a Retail manager at Granada TV rentals, accepting a bribe in exchange for a contract to a supplier. When he read this in Private Eye he got his lawyers on the case and they wrote this letter …

We act for Mr Arkell who is Retail Credit Manager of Granada TV Rental Ltd. His attention has been drawn to an article appearing in the issue of Private Eye dated 9th April 1971 on page 4. The statements made about Mr Arkell are entirely untrue and clearly highly defamatory. We are therefore instructed to require from you immediately your proposals for dealing with the matter.

Mr Arkell’s first concern is that there should be a full retraction at the earliest possible date in Private Eye and he will also want his costs paid. His attitude to damages will be governed by the nature of your reply.

The now very famous response that came back was this …

We acknowledge your letter of 29th April referring to Mr. J. Arkell.

Yours,
Private Eye
This inevitably gave rise to the following rather useful turn of phrase that sometimes gets deployed within legal circles “We refer you to the reply given in the case of Arkell v. Pressdram.“