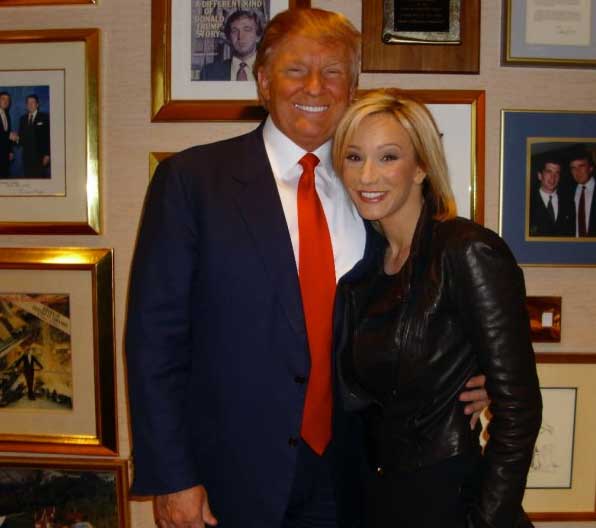 A rather common religious claim is that once you are converted and Jesus enters your heart, all your sins are washed away and you become a Born Again new person.

It is perhaps inevitable that the idea of being “born again” will persist because whenever somebody with this claim pops up and rather blatantly contradicts this by doing something abhorrent, a retreat to safety for the idea is accomplished by simply declaring the guilty to have not really been born again at all.

So here is this week’s selection of Weird Religious News. These are all individuals who claimed to have been truly washed clean by Jesus, and yet despite this supposedly divine supernatural cleansing, they appear to be well and truly unclean by any rational moral standard.

Was Jesus having an off day perhaps when he entered their hearts?

Item 1 – Trump Adviser: “Give My Church One Month’s Pay or Face “Consequences”

Paula White, a US televangelist, is also apparently one of Trump’s Spiritual advisers. She had just run a January fund raiser for her church by telling people that they must give one month’s worth of salary or “face the consequences”.

With a hat tip to David Mcafee, he posts the details …

She says God will reward or punish those who don’t pay up, but the money doesn’t go to God. It goes directly to Paula White Ministries by way of a convenient shopping cart.

Here’s what she says about “GOD’S PRINCIPLE OF FIRST FRUITS” (Yes, she used all caps):

Each January, I put God first and honor Him with the first of our substance by sowing a first fruits offering of one month’s pay. That is a big sacrifice, but it is a seed for the harvest I am believing for in the coming year. And God always provides! Every year many others join us and sow a month’s pay, a week’s pay, others give a day’s pay, but everyone gives their best — The results are miraculous! First Fruits has impacted my life personally and the lives of countless others! But First Fruits is more than just an offering… it’s a principle.

Who exactly is Paula White giving money to? Her own bank account? Since every link on that website goes directly to her donation page, we can safely assume she is sending the money to… her own ministry. That means it’s not a “big sacrifice” at all. It also brings new meaning to “God always provides!”

Still, she insists God will reward those who pay her… and punish those who don’t.

All Firsts belong to God. When you honor this principle it provides the foundation and structure for God’s blessings and promises in your life, it unlocks deep dimensions of spiritual truths that literally transform your life! When you apply this everything comes in divine alignment for His plan and promises for you. When you don’t honor it, whether through ignorance or direct disobedience there are consequences.

So let me spell this out for you a bit more. To set an “example”, she gives one month’s worth of salary to herself, as a charitable donation and so avoids paying any tax on it. If you think organised crime had cornered the market in extorting money from people with threats, then think again. In this context the victims all happily participate.

Additionally, as somebody who is simply playing the religious game to hustle for influence, money, and support, I guess it is quite natural for her to be drawn to Donald Trump.

Oh and least you wonder if she actually supports the pussy-grabbing deceiver, then I can also answer that. According to her, opposing Trump means opposing God.

It would appear that the Catholic Church does not have a monopoly on people abusing those whose care they have been entrusted with. Daniel Pye, a 36 year old missionary who ran an orphanage in Haiti has been sentenced to 40 years in jail.

A press release from the Florida U.S. Attorney’s Office has the details …

According to court records and the evidence presented at trial, Pye was a missionary who operated an orphanage in Jacmel, Haiti, from the years of 2006 through 2012.  The orphanage provided shelter, clothing, food, and school tuition to children without families and to children whose families could not afford to feed or otherwise support their children.  Pye obtained financial support for the orphanage through his connections with numerous religious organizations and other nonprofit groups in the United States.  During his time operating the orphanage, Pye would regularly sexually abuse the female residents of his orphanage, including girls as young as six years old.  As described by the Haitian victims during trial, Pye routinely sexually abuse his victims both at the orphanage and while at the beach.

Mat Staver is a Religious activist who is also rather homophobic has been very outspoken this week. Via Right Wing Watch we learn …

Mat Staver of Liberty Counsel appeared on VCY America’s “Crosstalk” radio program yesterday, where he asserted that gay people should not be allowed to serve as judges because they are incapable of being objective and fair in cases involving religious liberty for Christians.

Asked about Andrew McDonald, who was recently nominated to serve as chief justice of the Connecticut Supreme Court and, if confirmed, will be the first openly gay chief justice on any state court in the country, Staver was not shy about voicing his opposition.

“Here’s the problem with it beyond the issue of the morality of this,” Staver said. “Beyond the issue of other consequences is the fact that what we typically see is someone’s identity, their being, completely wrapped up in their sexual practices, meaning that—do you think that if you had an Aaron and Melissa Klein or a Jack Phillips bakery or anything else like that where you have the LGBT clash with religious freedom or freedom of expression come before this judge, do you think this judge is going to be open and fair irrespective of what he does to rule based on the Constitution and the rule of law? I don’t think so.”

“This is a real problem because what we are doing is we’re putting somebody on a bench who is siding with their personal identity,” Staver added, likening the situation to the recent resignation of Judge Alex Kozinski from his position on the Ninth Circuit Court of Appeals amid multiple allegations of sexual misconduct.

Insisting that Kozinski would have been unable to rule fairly in cases involving pornography or sexual assault, Staver asserted that McDonald, or any other gay judge for that matter, is likewise incapable of delivering objective rulings in cases involving LGBTQ rights or religious freedom.

The essence of his argument is that gay people can’t be judges because they will be biased against people who discriminate against them. The evidence for this claim … none at all, not one jot.

What perhaps blows your industrial strength irony meter to bits here is that the only actual discrimination going on is by individuals like Mat Staver. He would love to be legally permitted to trample all over basic human rights.

Just to put you in the picture a bit more regarding this guy, he is a young earth creationist and so is your classic science denier who rejects evolutionary biology for religious reasons. The discovery that he also rejects basic human rights for religious reasons is not exactly a huge leap from that platform.

He is also a lawyer and so quite naturally one of his clients just happens to have been Kim Davies. He represented her … unsuccessfully. In fact it is interesting to note that he has argued many cases before most of the federal courts of appeal … mostly unsuccessfully. He also argued a case at the Fourth Circuit Court of Appeals in Richmond, Virginia on behalf of Liberty University against the Affordable Care Act on July 12, 2013 … unsuccessfully.

Are you seeing a pattern yet?

If this guy ever offered to represent you in court then my advice is to duck and run.