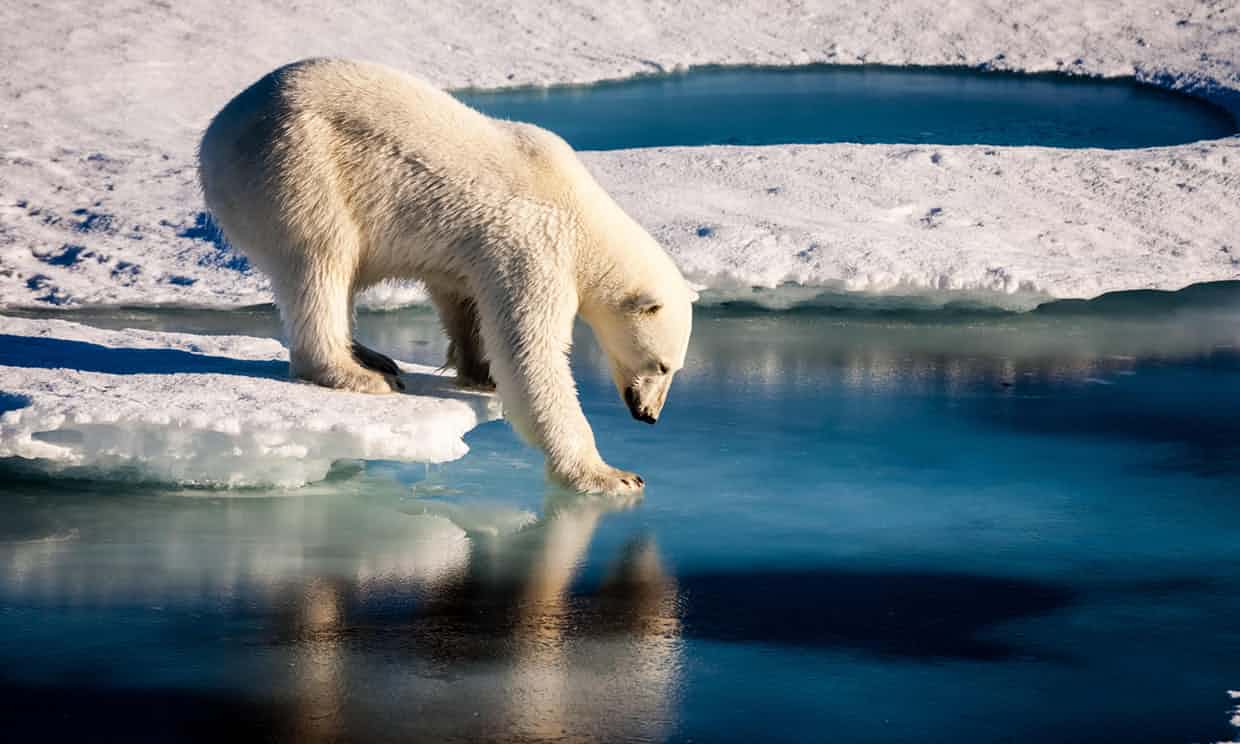 A new scientific study published a few days ago within a reputable peer-reviewed journal by some leading Climate Science scientists has generated rather a lot of heat within the climate denial community. Entitled “Internet Blogs, Polar Bears, and Climate-Change Denial by Proxy” and published within BioScience, it examines the reporting of Arctic Sea Ice and Polar bears within science blogs and then contrasts that with the claims asserted by the climate science denial community. The goal is not to specifically examine the evidence for Arctic Sea Ice or Polar Bears, but to instead examine how these are discussed.

What it reveals is quite frankly fascinating, and yet not exactly a surprise.

The Study Details and its conclusions

Polar bears (Ursus maritimus) have become a “poster species” for AGW, making them a target of those denying AGW evidence. Here, focusing on Arctic sea ice and polar bears, we show that blogs that deny or downplay AGW disregard the overwhelming scientific evidence of Arctic sea-ice loss and polar bear vulnerability.

The paper itself is very readable, you will find it here on-line and freely available. However, permit me if I may to bring you a distilled version of it …

The vast majority of scientists agree that most of the warming since the Industrial Revolution is explained by rising atmospheric greenhouse gas (GHG) concentrations (Doran and Zimmerman 2009, Cook et al. 2013, Stenhouse et al. 2014, Carlton et al 2015, Verheggen et al. 2015), that the frequency of extremely warm years will increase in a future of continually rising GHG levels, and that the harmful effects of anthropogenic global warming (AGW) on natural and managed ecosystems across the biosphere (Stocker et al. 2013) will escalate.

…much of the public remains unconvinced of the human influence on climate, as has been described by Working Groups 1 and 2 of the Intergovernmental Panel on Climate Change (IPCC), and believes scientists continue to debate AGW causes or even process (Lewandowsky et al. 2013).

After that we have a brief outline of the active climate denial community and the identification of some of the most popular denial blogs. They then proceed to make a very interesting observation ….

Although science-based and science-denier blogs may draw on similar examples, they frame their claims differently. For example, scientific blogs provide context and associated evidence, whereas denier blogs often remove context or misinterpret examples.

Now that is a measurable aspect, and so that is exactly what this paper then proceeds to do.

the main strategy of denier blogs is therefore to focus on topics that are showy and in which it is therefore easy to generate public interest. These topics are used as “proxies” for AGW in general; in other words, they represent keystone dominoes that are strategically placed in front of many hundreds of others, each representing a separate line of evidence for AGW. By appearing to knock over the keystone domino, audiences targeted by the communication may assume all other dominoes are toppled in a form of “dismissal by association.”

Well yes, this communication strategy is not unique to climate change, it is a rather common pattern and exists in other anti-science contexts such as flat-earth and also creationist contexts.

To put all that another way, ask yourself this. Do they publish good solid well-researched evidence within reputable peer-reviewed journals?

Nope, instead the prominent climate deniers cherry-pick something out of context and spin it in a way that appears to support their stance.

What exactly did they do for this study? 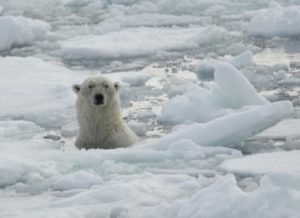 we identified a total of 90 blogs covering climate-change topics that mentioned both polar bears and sea ice.

So what did they find within this data sample?

Basically a rather stark contrast …

We found that none of the blogs or online sources expressed views with respect to AGW that were truly in the middle; they fell quite easily into two camps, as was evidenced by the preambles in their descriptors.

Scientific blogs provided convincing evidence that AGW poses a threat to both, whereas most denier blogs did not (figure 1). Science-based blogs overwhelmingly used the frame of established scientific certainties and supported arguments with the published literature affirming that warming is rapidly reducing seasonal Arctic sea-ice extent and threatening the mid- to longer-term survival of polar bears, whereas those written by deniers did not (figure 2). Science-denier blogs instead focused on the remaining uncertainties regarding the effects of AGW on Arctic ice extent, suggesting that those uncertainties cast doubt on the present and future demographic trends of polar bears.

What is rather interesting is this …

Approximately 80% of the denier blogs cited here referred to one particular denier blog, Polar Bear Science, by Susan Crockford, as their primary source of discussion and debate on the status of polar bears.

This supposed evidential source reveals an emperor with no clothes. Ms Crockford has not done any scientific research, nor has she published anything within a reputable peer-reviewed scientific journal on the topic, and yet is hailed as “an expert on polar bear evolution.”. Heartland describes her as “one of the world’s foremost experts on polar bears.”.

There is no other way to describe all this except to point out that the word “fraud” is a factually accurate observation.

They cite her as “evidence” because she asserts, on the basis of no credible evidence at all, that polar bears will easily adapt to any changes that Arctic ecosystems may experience.

What else goes on within the denial blogs?

Denier blogs that downplay the threats of AGW to Arctic ice and polar bears rely heavily on arguments that it has been warmer in the past, that temperature and seasonal ice extent vary naturally over time, and that it is therefore difficult or even impossible to predict what will happen in the future. This framing ignores the fact that scientists agree that natural short-term fluctuations in weather and climate will persist along with secular trends of global warming and declining ice. Also, previous global-warming events were a part of natural cycles of warming and cooling driven by orbital factors. Summer sea ice did not disappear entirely during past interglacial periods (Stein et al. 2017), as it ultimately will with unabated GHG rise. And even if dramatically reduced, ice extent always recovered when warm interglacial periods were followed by waning insolation and cooling temperatures. Current global warming, in contrast, is driven by rising GHG concentrations, is occurring despite reduced insolation, and cannot be reversed without mitigating GHG rise (Brigham-Grette 2009, Tzedakis et al. 2012, Barnhart et al. 2013, Stocker et al. 2013).

How should we deal with the denial?

Distortions are clearly in play, so when faced with denial “evidence” there are productive ways of looking at it. The paper does offer the following (the below is extracted from the paper, but is my formatting) …

The paper concludes with a recommendation

We believe that it is imperative for more scientists to venture beyond the confines of their labs and lecture halls to directly engage with the public and policymakers, as well as more strongly confronting and resisting the well-funded and organized network of AGW denial.

… and there are good examples …

the prominence and importance of blogs such as Real Climate show how climate scientists can successfully enter the blogosphere. Expanding this to include Twitter, Facebook, YouTube, and other social-media sources may help to close the consensus gap, and we urgently encourage such efforts.

It is a very readable paper, so if curious to see more detail, just click here to read it.

OK yes, I bet you are curious to know which blogs. You can click here to find the full list (Word doc) From there the list of scientific blogs is as follows (and that in itself is a great tip for a good source to add into your RSS reader of choice).

How has the climate denial community responded?

In exactly the manner you would perhaps anticipate.

Sou at HotWhopper blogs about the response within the denial blogosphere to the above article, and that is quite fascinating.

The protests from deniers came thick and fast. As usual, in writing their articles they amply illustrated the reliability of the findings.

In all the denier articles I looked at, not one of them provided any scientific support for the ideas promoted by Susan Crockford. Not one could find any scientist who agreed with her. Thus providing further evidence supporting the findings of the authors

Sou then proceeds to list out exactly how the denier blogs have responded to the study in detail. To give you a quick feel, here are a few gems I’ve extracted so that you grasp the scope of the tone and content of their responses …

At WUWT, Anthony Watts posted not one, not two, but three articles. In his first, he mostly ignored the lead author, skipped over the next eight authors, and chose to promote the 10th and 14th authors – Drs Stephan Lewandowsky and Michael Mann respectively. He adopted the “attacking scientists” technique

The evidence Anthony Watts offered to show Harvey17 was all wrong in fact did the opposite. It corroborated Harvey17. His evidence was, you guessed it, Susan Crockford! Ha! the very same unpublished source that the authors said was the main source for 80% of the denier blogs they analysed! Her biggest complaint was that none of the authors had commented on her recent not peer-reviewed paper.

The second protest at WUWT was an article by Larry Kummer. He too was basing his protest on Susan Crockford and her “kill off the polar bear” meme. He too showed that the authors of Harvey17 were spot on.

The climate deniers, when faced with the evidence of their denial, have as a response proceeded to give a demonstration that everything that the study said about them was indeed spot on.