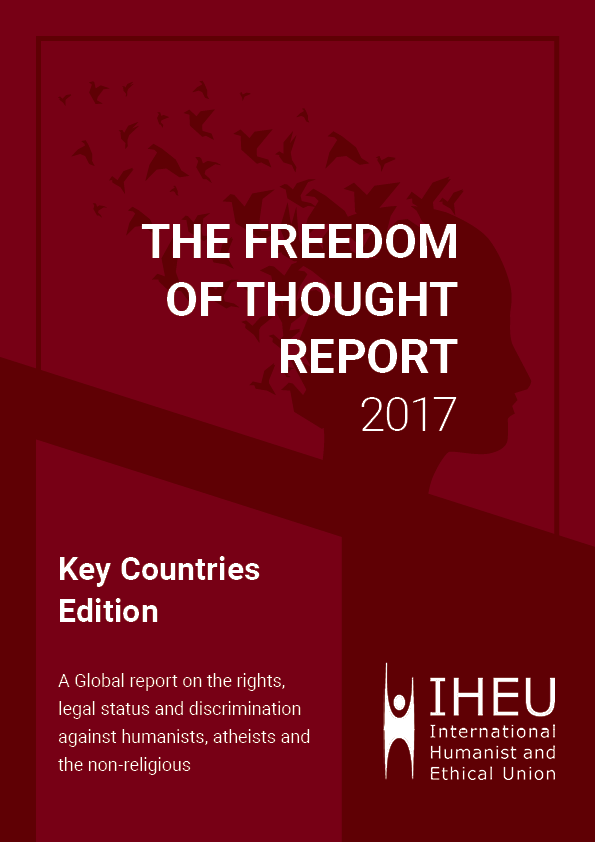 Each year the International Humanist and Ethical Union (IHEU) issues an updated version of their Freedom of Though report. The latest edition is now available.

What exactly does the term “Freedom of Thought” mean?

The right to freedom of thought, conscience, religion or belief protects the individual conscience of every human being. This right was first stated by the global community in 1948 within Article 18 of the Universal Declaration of Human Rights. It states:

“Everyone has the right to freedom of thought, conscience and religion; this right includes freedom to change his religion or belief, and freedom, either alone or in community with others and in public or private, to manifest his religion or belief in teaching, practice, worship and observance.” — Article 18, Universal Declaration of Human Rights

This simple but powerful statement was given the force of international law by the International Covenant on Civil and Political Rights in 1976. In 1981 it was given broader application and detail by the UN Declaration on the Elimination of All Forms of Intolerance and of Discrimination Based on Religion or Belief.

So how are we as a species doing, do we generally adhere to this?

Well, that is what this report is all about.

Key findings in the 2017 report

The report itself is sadly rather a large document and is broken down into individual sections for each and every nation state.

Within the opening, the editorial sets the scene as follows …

Through publication of this report, the International Humanist and Ethical Union (IHEU) issues a warning: that in at least seven countries the non-religious were actively persecuted in new or evolving major incidents or trends in 2017. This includes the murder of humanists or atheists in at least: Pakistan, India, and the Maldives; we record new waves of incitement to hatred or violence in at least Malaysia, Mauritania and Pakistan; and we record new death sentences faced by alleged “apostates” (from Islam to atheism) in Sudan and Saudi Arabia.

Under the entry for Pakistan you will read about the murder of Mashal Khan, a student who called himself ‘the humanist’ on Facebook, who was beat to death by a mob of fellow students at university. Although some efforts have been made to bring the large number of people involved in his murder to justice, it is unclear whether they will face real sanction for their actions, or whether the supposed ‘blasphemy’ of their victim will be treated as a mitigating factor. The murderers of alleged ‘blasphemers’ often get off lightly, and such cases are notoriously diffcult and dangerous even for members of the legal profession; already the lead prosecutor against the alleged killers of Mashal Khan has been forced to quit the case after receiving threats. Under the entry for India you will read about the murder of H Farook, in a case which has been widely overlooked around the world, and largely forgotten in predominantly Hindu India, perhaps because the accused was killed for being an “apostate” from Islam. Under the entry for Maldives you will read about Yameen Rasheed, a human rights activist and a secularist in a country bending rapidly toward political Islam, stabbed to death in the communal hall of his building. This a case on which the country’s president saw fit to intervene, by reminding the populace that they must respect religion.

Blasphemy – The ‘crime’ without a victim

People hold very specific beliefs often for cultural reasons, and sometimes at a deep emotional level. They are generally sure that their specific belief is the true divinely inspired one, and that all other beliefs are man-made and false. The core ideas of the belief are protected and so anybody daring to actually criticise is deemed to be a blasphemer. In some nations “blasphemy” is a crime that will result in a prison sentence or even worse.

Even not believing is itself a crime.

Another variation of religious intolerance is changing your mind. If you change your mind and start believing something different, then that is also a supposed crime.

As highlighted by the report …

The punishment proscribed in law for “apostasy” (converting religion or declaring oneself not of a religion) is often death. In fact, we document 22 countries which criminalize apostasy. In 12 of those countries (Afghanistan, Iran, Malaysia, Maldives, Mauritania, Nigeria, Qatar, Saudi Arabia, Somalia, Sudan, United Arab Emirates, Yemen) “apostasy” is in principle punishable by death. Pakistan doesn’t have a death sentence for apostasy but it does for “blasphemy”, and the threshold for blasphemy can very low. So, in effect you can be put to death for expressing atheism in 13 countries.

Many countries have “blasphemy” laws that outlaw criticism of protected religions, religious beliefs, religious fgures, or religious institutions. For example, Pakistan has prosecuted more than a thousand people for blasphemy since introducing its current anti-blasphemy laws in 1988. Dozens of those found guilty remain on death row, and there are repeated calls from Islamist leaders to lift the effective moratorium, enforce the death penalty, and make death the only sentence for “blasphemy” convictions.

The ‘crime’ of criticising a religion is not always called “blasphemy” or “blasphemous libel”; some countries outlaw “defamation of religion”; sometimes is included under hate speech laws (i.e. some hate speech laws outlaw expressions that fall well below any sensible standard of actually inciting hatred or violence); some quasi-“blasphemy” laws outlaw instead “hurting religious sentiments” or “insulting religion”. As documented in this report, there are legal restrictions against expressing “blasphemy”, defaming or insulting religion or religious beliefs, or offending religious feelings etc, in 74 countries. This is higher than some other lists put the figure. Our report does include laws which use variants of the word ‘blasphemy’ or ‘defamation of religion’, ‘hurt sentiments’, ‘insult’, etc, and including anti-hatred laws where those laws appear to be usable to restrict what should be legitimate free expression about religion. We do not include laws which appear genuinely to prohibit incitement to hatred only.

Of these countries with “blasphemy”-type restrictions, 43 allow for a prison term for this crime. And the crime of “blasphemy” is punishable by death in a further 6 countries: Afghanistan, Iran, Nigeria, Pakistan, Saudi Arabia and Somalia. In addition, most of the twelve countries which punish “apostasy” with death also sometimes treat ‘blasphemy’ as evidence of apostasy.

There is much more, but basically you perhaps by now see that even in 2017, while we as a species have come a long way, we still have a very very long way to go if we are ever going to live up to Article 18 of the Universal Declaration of Human Rights.

Ideas, such as religious beliefs, do not have rights, only people do.

Everyone has the right to freedom of thought, conscience and religion; this right includes freedom to change his religion or belief, and freedom, either alone or in community with others and in public or private, to manifest his religion or belief in teaching, practice, worship and observance.” — Article 18, Universal Declaration of Human Rights