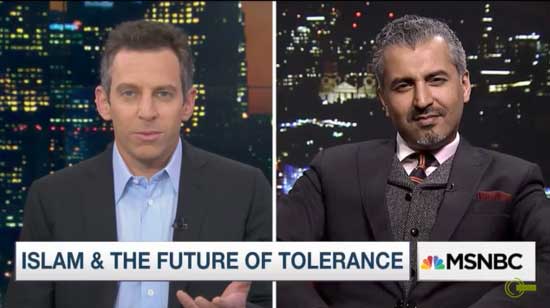 Hemant Mehta has written a recent posting in which he describes in precise detail how words can be lifted out of context and then re-purposed as a weapon.

It is a fascinating read, and to tempt you into reading it all let me give you a summary.

Last January Sam Harris interviewed his friend and co-author the moderate Muslim reformer and ex-radical Maajid Nawaz for his podcast. As part of that, Harris played the role of devil’s advocate and articulated a common argument presented by some – that banning Muslim refugees was a good thing because incidents such as the Christmas market massacre in Germany would not happen.

Here’s what he said in context:

… As a counterpoint to all of the hopeful noises you just made, I would just like to offer this.

This is kind of a gut reaction that I know millions upon millions of people are having to things like what we just saw in Germany — the recent atrocity at the Christmas market… You see something like this, and this is happening in the context of this wave of immigration coming into Europe by virtue of, largely by virtue of the war in Syria, although there are other reasons.

And there’s just the brute fact that 100% of Jihadists are Muslim, right? These are not the Amish. They are not the Scientologists. They are not the Anglicans. If you take a community of Muslims from Syria or Iraq or any other country on Earth and place them in the heart of Europe, you are importing, by definition, some percentage, however small, of radicalized people. Or people who will be prone to radicalism at some future date where they just decide to start watching too many Anwar al-Awlaki videos, you know?… This only happens to Muslims or people who are likely to become Muslim, right?

So you see this massacre in the Christmas market, and I think many people will feel: What is the fucking point of having more Muslims in your society? It seems perfectly rational to say “We don’t want any more! We have enough,” right? And certainly, increasing the percentage is not a help to anyone who loves freedom of speech and any of the other liberal values that you and I just spoke about maximizing. It’s not worth the trouble, and if we can figure out some way to keep the number of Muslims down in any society, whether we’re honest about this, or whether we do this covertly, clearly it’s rational to want to do this. And this is where someone like Robert Spencer would say “Amen,” I would presume. Can you speak to that despair? Again, this is not an expression of xenophobia. This is the implication of statistics, and the fact that it’s only rational not to want to live in a world that looks more and more like Jerusalem at the height of the Intifada, right?

Once that was on the table, Maajid could then respond to this line of thought. In context it is totally clear that this is not a view held by either Sam Harris or Maajid Nawaz.

What happens next can only be described as deliberate fraud and deceit. Somebody clipped the audio and lifted out just the bits marked in bold, then circulated that with the caption “Listen: Maajid Nawaz nods along Sam Harris’ eloquently genocidal rhetoric on Muslims.”

Hemant then describes what happens next …

I doubt anyone would’ve noticed that tweet… except that Reza Aslan, the religious apologist who thinks faith shouldn’t be blamed for faith-based terrorism, fell for the lie and spread it even further. Like all good “scholars” do.

He even used the caption “Just in case there’s still a few idiots out there who think Sam Harris is some kind of ‘liberal’ defending liberal ideals.”

Just in case there's still a few idiots out there who think Sam Harris is some kind of "liberal" defending liberal ideals. https://t.co/gtbutd9mOr

Since then, other commentators including Rula Jebreal, Max Blumenthal, and Dean Obeidallah have all taken that clip and amplified it, telling their audiences that it represented Harris’ actual beliefs.

That leaves Harris in the unenviable position of trying to correct his ideological opponents on a matter they’ve already misinterpreted and refuse to apologize for.

They refused to do any research. They couldn’t be bothered to hear the clip in context. They merely heard the words, assumed the worst of Harris, and ran with it. It’s the exact opposite of what any honest critic would do.

Hemant reached out to Sam harris and asked him for his thoughts on all this. His reply was as follows …

The audio clip from my recent podcast with Maajid Nawaz that was recently circulated on Twitter was edited so as to make me sound totally opposed to Muslim immigration. (In fact, it left out any mention of immigration, so it could have been heard as a call for ethnic cleansing of some sort.) Maajid was made to seem totally acquiescent to these views. Needless to say, the misrepresentation was deliberate.

The most charitable interpretation of what followed is that the more prominent Muslims who circulated the clip were just intellectually lazy and guilty of confirmation bias. But there is far too much history here for that to have been the case. I’ve said on multiple occasions that I think we have a moral obligation to let in as many Syrian refugees as we can properly vet. I’ve also said that secular, liberal, tolerant Muslims are the most important people on earth — and that if I had control of our immigration policy, I’d move them to the front of the line for citizenship. As you probably know, I’ve also been very supportive of ex-Muslims and Muslim reformers and count several among my friends. And yet, Reza Aslan, Rula Jebreal, Dean Obeidallah, along with dozens of other “moderate” Muslims (and their Left-wing enablers) have spent years attacking me as a “racist” who favors a “genocide” against Muslims.

Reza Aslan was the most prominent person to circulate the clip, and he knows exactly what my views are on immigration, Trump’s travel ban, and all other relevant points. He knows how close I am with Maajid Nawaz and Ayaan Hirsi Ali, and that I make every effort to support them. He knows, therefore, that accusations of racism, anti-Muslim bigotry, etc. are lies. In fact, in all these years, I don’t think he’s ever attacked me for a view that I actually hold — which is quite a feat.

I want to point out something that many of our readers will not have thought about, but which all these Muslim apologists well understand: Spreading lies about a person’s “racism” and support for “genocide” is dangerous. We are nowhere near the terrain of good faith debate here. These are utterly irresponsible, malicious people, doing conscious harm to our public conversation — and doing whatever they can to destroy the reputations (and more) of those of us who, at considerable personal risk, attempt to have rational conversations about some of the most important issues of our time. This is asymmetric warfare: One side has few security concerns and no scruples. (None of these Muslims is worried about being killed by an atheist or a Muslim reformer.) The other is frequently threatened and does its best to abide by the highest standards of intellectual honesty.

Here is the situation at its starkest: These people aren’t fit to tie Maajid’s shoes, and yet they are doing everything in their power to make his courageous and necessary work more dangerous. It is despicable.

The evidence is clear, this was not an honest mistake, nor was it a misunderstanding. Instead this was a deliberate attempt to fraudulently attack by soundbite mining. As Sam harris makes clear, the primary amplifier, Reza Aslan, grabbed this and ran with it in the full knowledge that he was promoting something that is simply not factual.

This is the true essence of fake news.

Such actions reveal a few rather interesting things …

If indeed there is going to be criticism, then let it be for the things that are actually said and done, and not for fraudulent misrepresentations.

In some respects this is related, and so I’d like to also highlight what has happened with the SPLC.

Currently the SPLC has branded Maajid Nawaz as an “anti-Muslim extremist”.

The rather glaring fatal flaw in that SPLC stance is that Maajid is himself a Muslim and so I am completely astonished that he has been branded like this. I’m not alone in that reaction, many others are equally dumbfounded.

As David Graham pointed out within an Atlantic article …

he does things like appear in an Intelligence Squared debate arguing for the proposition—against Ali, in fact—that Islam is a religion of peace. (“I lost the vote,” he said, with a tinge of bitterness.) He has also won praise for battling Islamophobes in the press.

Mr Graham then proceeds, point by point, to take apart the SPLC arguments for their stance and leaves it all lying on the floor a smouldering wreck.

Through the counter-extremism organisation Quilliam that I founded, I have spent eight years defending my Muslim communities in Europe, Pakistan and beyond from the diktats of Islamist theocrats. …

In a monumental failure of comprehension, the SPLC have conflated my challenge to Islamist theocracy among my fellow Muslims with somehow being “anti-Muslim.” The regressive left is now in the business of issuing fatwas against Muslim reformers.

… Anderson Cooper has said that mine is a “voice I urge you to hear.” 60 Minutes correspondent Lesley Stahl considers my story “absorbing” and my work “important”. Kate Allen, UK head of Amnesty International has said my life involves “a passionate advocacy of human rights” and that she “was moved beyond measure.” Former UK Prime Minister David Cameron sought my advice regularly while in office. And against this assault by the Southern Poverty Law Center I have the support and acknowledgement of the UK’s only watchdog against anti-Muslim hate run by Muslims themselves, Tell Mama UK.

The Lantos Foundation for Human Rights and Justice has written an open letter to SPLC pointing out that they are betraying their own noble mission of fighting bigotry.

…the name that has jumped out at everyone is the Muslim reformer Maajid Nawaz. The text underneath oozes malice. The SPLC tries to make out that Nawaz’s stag night makes him an extremist. It misrepresents the work of his Quilliam Foundation so thoroughly I no longer recognised the organisation I knew. All these tricks and non-sequiturs, just so it can turn a liberal Muslim anti-extremist, into a reactionary ‘anti-Muslim extremist’.

Mr Cohen then proceeds to explain exactly why the “evidence” offered by SPLC is complete bollocks. When he laid out the details to Mark Potok at the SPLC he was aghast to discover that they were quite determined to remain on the wrong side in the fight against the religious right. He strongly recommended and encouraged Maajid to sue the SPLC.

That is exactly what he is now doing.

The Depth of this tragedy

SPLC, Maajid Nawaz, and many others share the same goals – namely fighting against the unjustifiable targeting of people for simply having a Muslim heritage. If valuable time and resources are consumed fighting each other, then what hope is there for fighting against the actual bigots.

What lays a foundation for such antics and also helps to bolster it is the on-going creation and then propagation of deliberate and wholly fraudulent claims that are designed to stir up such divisions.

"It's funny, you're fighting extremists, but they're calling you the extremist." Watch @BillMaher and @MaajidNawaz on #RealTime: pic.twitter.com/KQ5IrdNk4u