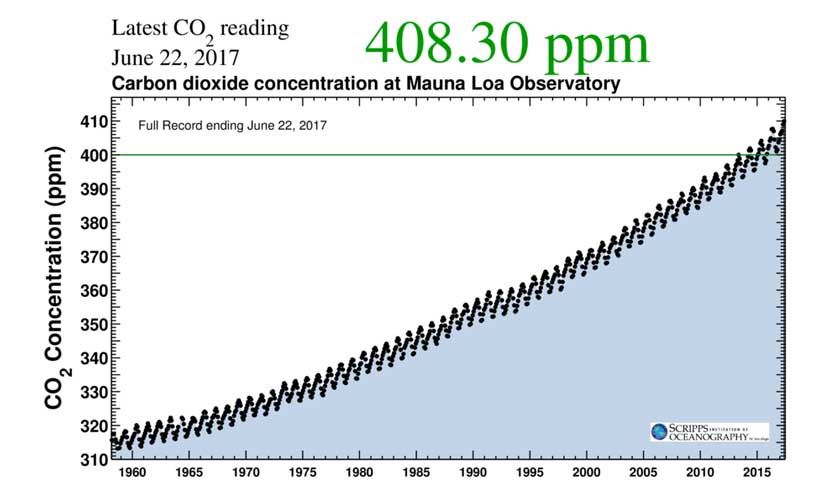 Justin Gillis, a journalist who covers science and climate change, writes within the New York Times  – Carbon in Atmosphere Is Rising, Even as Emissions Stabilize.

the amount of carbon dioxide that people are pumping into the air seems to have stabilized in recent years, at least judging from the data that countries compile on their own emissions.

That raises a conundrum: If the amount of the gas that people are putting out has stopped rising, how can the amount that stays in the air be going up faster than ever? Does it mean the natural sponges that have been absorbing carbon dioxide are now changing?

If we surf on over to the Scripps Institution of Oceanography and check out the latest measurements on the Keeling Curve, then yes indeed, it is still tracking its normal seasonal variation and recently hit an all-time high of 410 ppm .. 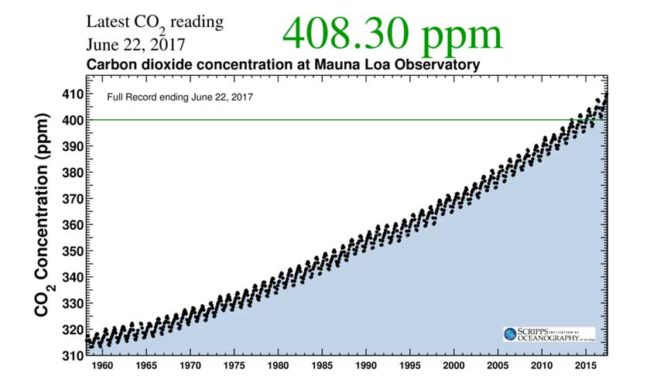 There is no sign of any pause or slowdown at all, it is simply continuing the upward trend.

Incidentally, if curious to understand a bit more about the Keeling curve and the source of these measurements, then you can click here to read up on it all …

The Scripps CO2 program was initiated in 1956 by Charles David Keeling and operated under his direction until his passing in 2005. It is currently being continued by Ralph F. Keeling, who also runs a parallel program at SIO to measure changes in atmospheric O2 and Ar abundances (Scripps O2 Program).

Current results, including data sets and graphics, are available from the ongoing program to measure CO2 and chemical species.

Meanwhile back to that NYT article

OK, so let me briefly sum things up for you in four steps …

There are precise measurements of the annual rate of increase … 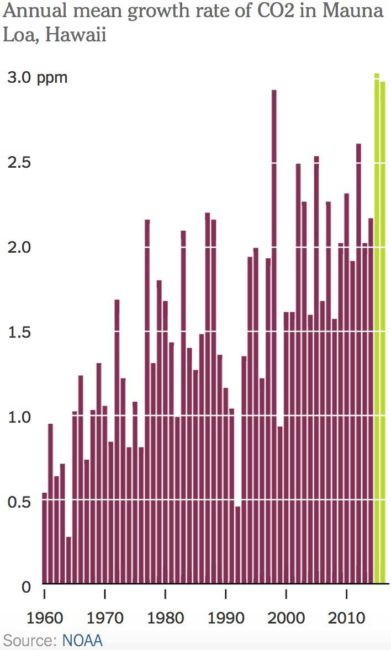 So what is the answer, have we reached the limit?

It is way too early to draw any conclusions here, and we simply do not have the data needed. There was a need to invest in a far more comprehensive monitoring network, so a failure to achieve that means that we don’t know.

“It’s really bare bones, our network, contrary to common misperceptions about the government wasting money,” said Pieter Tans, chief of a unit that monitors greenhouse gases at the National Oceanic and Atmospheric Administration.

While the recent events have made the scientific need for an improved network clear, the situation may be about to get worse, not better. President Trump’s administration has targeted American science agencies for cutbacks, with NOAA, the lead agency for tracking greenhouse gases, being one of those on the chopping block.

We have enough to measure the global tends at the moment, what is missing is an understanding of where on the planet CO2 is being absorbed and so we can’t explain the recent uptick.

The Rather Worrying conclusion …

Dr. Tans said that if global emissions flattened out at today’s high level, the world would still be in grave trouble.

“If emissions were to stay flat for the next two decades, which could be called an achievement in some sense, it’s terrible for the climate problem,” he said.

We live in a world where there is a complete denial of the very existence of what we face. Climate Change is I would argue perhaps the greatest threat our species has ever had to come to terms with. In some ways this perhaps reminds me of a conclusion once drawn by Richard Feynman. Within Appendix F of the Rogers Commission Report, he writes this at the end …

reality must take precedence over public relations, for nature cannot be fooled