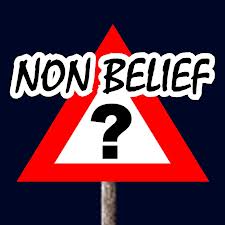 People have different degrees of confidence regarding different things, and non-belief is no exception to that observation. For example, some make the observation that due to the complete lack of evidence, god claims can be dismissed. Others would take that a step further and make a “no-God” assertion for various reasons. However, it is not this type of distinction I’m talking about today, but instead more about what makes non-believers tick. What is clear is that there is a fast rising tide of non-belief, so understanding how individuals are aligning themselves with this new reality perhaps gives us insights into future social trends. It may indeed scare the truly devout who have visions of gangs of atheists rampaging across the countryside raping and pillaging as they go, but that is of course daft, morality and behaviour has very little to do with religion and is far more firmly rooted in the degree of empathy we have also also the prevailing culture. So what is really going on out there?

We have some new data. Researchers at the University of Tennessee at Chattanooga interviewed non-believers to find out what kind of people abandon religious faith and why, and so using the results from this they were able to identify six basic categories of non-belief.

At this link, Details here, they explain …

Our goal was to be as thorough as possible in the design of our study. Moreover we wanted to give a much-needed voice to this community by allowing their narratives and experience to inform the scientific portion of our research. With over 1,153 participants nationwide contributing to the current analyzed dataset, it was truly a collaborative effort brought to fruition thanks to the vastly diverse community of non-believers in America.

Now what is rather interesting about all this is that up until now, all those who do not believe have been lumped into one unified category – “religious nones” – and so there has been an assumption that all non-believers are the same, yet what we now discover is that while non-believers might indeed have non-belief in common, beyond that there is a vast diversity of thinking.

So what have they got?

In what we hope will become at least a modest crack in the monolithic “religious none” category, we proudly present a very brief overview of our findings based on the diverse “types” of non-belief that make up an important and growing sub-population of America today. A typology of six characteristics emerged within the data and is presented as follows.

OK, so here is a quick summary of their six categories …

This is where the bulk of non-belief sits – basically they are individuals who have managed to think their way through to non-belief and relish knowledge and truth. They will also happily hang out and engage with other intellectuals, even if those others do not hold the same view.

IAAs associate with fellow intellectuals regardless of the other’s ontological position as long as the IAA associate is versed and educated on various issues of science, philosophy, “rational” theology, and common socio-political religious dialog. They may enjoy discussing the epistemological positions related to the existence or non-existence of a deity. Besides using textual sources such as intellectual books, IAAs may utilize technology such as the Internet to read popular blogs, view YouTube videos, and listen to podcasts that fall in line with their particular interests. Facebook and other online social networking sites can be considered a medium for learning or discussion. However, not only is the IAA typically engaged in electronic forms of intellectualism but they oftentimes belong to groups that meet face to face offline such as various skeptic, rationalist and freethinking groups for similar mentally stimulating discussions and interaction. The modus operandi for the Intellectual Atheist/Agnostic is the externalization of epistemologically oriented social stimulation.

In other words, if you like to go to meetups such as skeptic, freethought or science-based conventions, then this is probably you.

The next big demographic is a category of those who are termed “activist”. They seek to be vocal and proactive about their non-belief and also related issues such as humanism, feminism, Lesbian Gay Bisexual Transgendered (LGBT) issues, social or political concerns, human rights themes, environmental concerns, animal rights, and controversies such as the separation of church and state. This might involve boycotting products, marching to raise awareness or supporting legal action.

The Activist Atheist/Agnostic’s are not idle; they effectuate their interests and beliefs.

These are the folks who keep an open mind to all possibilities, and … “actively search for and respond to knowledge and evidence, either supporting or disconfirming truth claims …. the majority of Seeker-Agnostics should in no way be considered “confused.” For the Seeker-Agnostic, uncertainty is embraced. “.

These are those who are opposed to religious ideology, see it as ignorance and … “see any individual or institution associated with it as backward and socially detrimental.”

These are those who have no interest in religion at all, and do not get involved in intellectual pursuits that either support or oppose religion.

Religion plays no role or issue in one’s consciousness or worldview; nor does a Non- Theist have concern for the atheist or agnostic movement. No part of their life addresses or considers transcendent ontology.  They are not interested in any type of secularist agenda and simply do not care. Simply put, Non-Theist’s are apathetic non-believers.

This last category is a bit of a surprise, they don’t believe in the supernatural, but do see value in religion and view the non-supernatural aspects as philosophical teachings of how to live life and achieve happiness, because they perceive ceremonies and rituals as producing personal meaning within life.

This meaning can be an artistic or cultural appreciation of human systems of meaning while knowing there is no higher reality other than the observable reality of the mundane world. In some cases, these individuals may identify strongly with religious traditions as a matter of cultural identity and even take an active participation in religious rituals.

Apparently this last category terrifies believers, the very idea that the person sitting next to them in the pew might not actually believe is a truly scary thought for them.

You might look at all the above categories and find that you don’t really fit into any of them or perhaps fit several of them concurrently. Social scientists do what they do by sticking labels on people and yet at the same time they do also recognise qualitatively the limits inherent in any label, and so they articulate this quite well when they write …

The differences here in typology relate to the mode and value each participant places on how they engage issues of ontology. In other words, what is their preference for debating and considering the place religion and secularity play in our society? … These labels were chosen by the research team to be reflective of the emotional, personality, and cognitive structures of value these people place on their worldviews (types).

Oh, and also they note …

We welcome ideas, suggestions, and critiques. We also hope others will research non-belief and we tip our hat to the small but growing number of scholars who currently do. The team at Atheismresearch.com would like to thank the vast and diverse non-belief community for sharing with us their particular time and moment in today’s society as we hope to have provided an honest reflection of the varieties of non-belief.

Regardless of how you may choose to slice and dice, what is clear is that using just one category, “religious-nons” is way too simplistic for what is in essence a vastly diverse group.