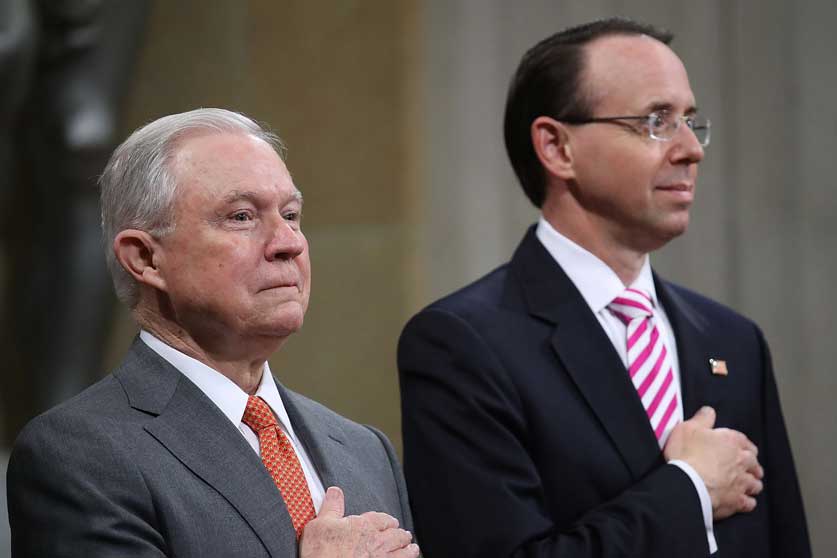 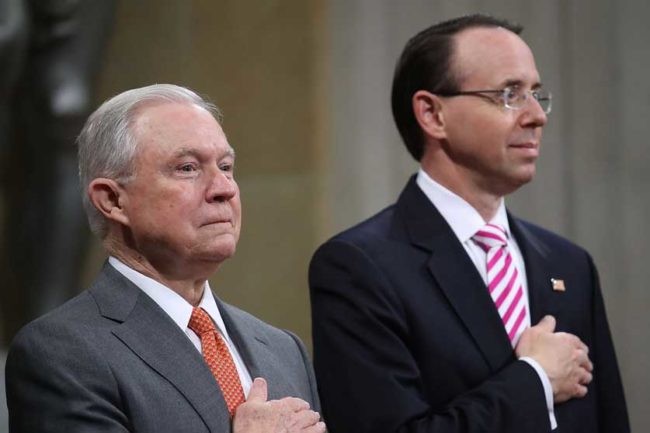 A Religious Liberty Task Force sounds and feels like something out of the Handmaids Tale, and yet it is quite frighteningly real. It might in the past have been deemed absurd to think that the Attorney General of the United States would embark upon a religiously inspired holy war against the LBGT community, yet that is now the stark raw reality of what is happening.

Here is the link on the official Department of Justice website.

His opening stance is this …

A dangerous movement, undetected by many, is now challenging and eroding our great tradition of religious freedom. There can be no doubt. This is no little matter. It must be confronted and defeated.

Dangerous for whom? Dangerous in what way exactly? How is “religious freedom” being challenged and eroded? He attempts to define this as follows …

We have gotten to the point where courts have held that morality cannot be a basis for law; where ministers are fearful to affirm, as they understand it, holy writ from the pulpit; and where one group can actively target religious groups by labeling them a “hate group” on the basis of their sincerely held religious beliefs.

This is complete and utter bullshit, but you knew that would be the case because this guy is a master of the art of bullshitting having be carefully selected for the role by the bullshitter in chief.

To be clear, it is not a fact that “courts have held that “morality cannot be a basis for law”. Nor is it a fact that “ministers are fearful to affirm, as they understand it, holy writ from the pulpit”. It is however a fact that many religious groups are quite happy to promote not only misogyney but also openly discriminate against groups of people. That by definition makes them hate groups. This is not a difference of opinion, it is a fact.

“Sincerely” held religious beliefs does not merit a “face-no-consequences” card. The 9/11 hijackers did what they did because of their “sincerely held religious beliefs”. People can and do cherry pick bits of the bible and use that to justify their own pre-existing biases. The bible itself, a pro slavery text from cover to cover, is not a source of morality.

This President and this Department of Justice are determined to protect and even advance this magnificent heritage.
Freedom of religious is indeed our “first freedom”—being the first listed right of our First Amendment.
This has been a core American principle from the beginning.

Actually, as he should know, and as is well-known, the First Amendment actually reads …

“Congress shall make no law respecting an establishment of religion,…“

… and yet here is is setting up a Religiously inspired task force that will attempt to impose one specific variation of religious belief.

He then moved on to refer to a book he read called “Head and Heart: American Christianities” and highly recommends it. It’s rather a pity he did not actually read it with any meaningful understanding because the stance taken by the author within that book is this ….

Wills rebukes today’s evangelicals for their intellectual feebleness. He shows that their effort to make born-again Christians out of the founding fathers is simply bad history. He dismisses their claim that creationism is a science, and he reproaches them for demonizing the social transformations of recent decades as a “secular humanist” conspiracy. A Christianity that refuses to face up to intellectual difficulties, he believes, will always render itself ridiculous.

The irony here is both deep and wide, because Mr Sessions is using this text to justify doing exactly that, and he truly does make himself look ridiculous.

He has a Jefferson Quote

“For I have sworn upon the altar of god eternal hostility against every form of tyranny over the mind of man.” This is what our Founders believed.

They clearly recognized that an individual’s relationship to God is a natural right and precedes the existence of the state, and is not subject to state control.

Er no, that is not what that quote is saying, it is about tyranny, not belief. Once again I’ve blown my irony meter because here he is acting on behalf of the tyrant-in-chief attempting to impose a specific religious belief upon everybody.

He then moves on to point out that religious people do good things.

Every day across America, they feed the hungry, shelter the homeless, educate our young people, and care for the sick.

That’s true, but they are not inspired to do so because they hold a specific belief as he suggests, but because generally humans have empathy. Can he name any variation of belief or non-belief that does not do this?

Well yes, apart from the GOP who clearly want to see that all stopped.

Their faith provides something the state can never provide—meaning and purpose and joy in their life.

Generally everybody finds meaning and joy, you don’t need a religious belief for that, and nobody leans upon the state for that.

Apparently Faith is Under Attack

He makes the claim and then cites some examples …

Many Americans have felt that their freedom to practice their faith has been under attack.

And it’s easy to see why.  We’ve seen nuns ordered to buy contraceptives.

That’s a bullshit claim and factually not true. It’s a reference to the fact that Under the Affordable Care Act, businesses with more than 50 employees must provide healthcare that covers services including all government-approved forms of contraception or face fines. The story here is that the “Little Sisters of the Poor” went to count and cited the Hobby Lobby ruling to seek a default exception to this. The U.S. Court of Appeals rejected their plea. They are in fact under law permitted to opt out, they were simply seeking to avoid taking the extra steps needed to get an exception. The claim of “nuns ordered to buy contraceptives”, is an outright lie. This however is the Trump administration and so lying is official policy.

Next this pops up …

US Senators are entitled to ask potential nominees anything they wish. Rejecting candidates who embrace religious bigotry and believe that dogma trumps the law is wholly constitutional. That’s not an opinion, it is a legal fact that the Attorney General of the United States should have been aware of if he was competent.

We’ve all seen the ordeal faced so bravely by Jack Phillips.

Jack Phillips is a bakery owner who refused to supply a cake for a gay couple celebrating their wedding. It was a case of rather blatant discrimination. His “ordeal” was wholly self-inflicted.

Americans from a wide variety of backgrounds are concerned about what this changing cultural climate means for the future of religious liberty in this country.

Translation: The right-wing would like to carry on imposing their specific right-wing evangelical belief and are concerned that they will not only face ongoing criticism but will not be permitted to do that.

Translation 2: The Trump administration is pandering to the insecurities of evangelicals, and making bold promises in the hope that they maintain their support for an utterly inept administration in the mid-term elections.

And so it all leads up to this …

Today I am announcing our next step: the Religious Liberty Task Force, to be co-chaired by the Associate Attorney General and the Assistant Attorney General for the Office of Legal Policy—Jesse and Beth.

The Task Force will help the Department fully implement our religious liberty guidance by ensuring that all Justice Department components are upholding that guidance in the cases they bring and defend, the arguments they make in court, the policies and regulations they adopt, and how we conduct our operations.  That includes making sure that our employees know their duties to accommodate people of faith.

… and so this merry band will sail forth to ensure bakers can maintain their bigotry, and generally enable the deeply religious to discriminate on the sole basis that they simply believe that their imaginary friend is real.

The US was founded as a secular republic and is not a religious state. Despite that he does toss this parting claim into the mix …

We are perhaps the most religiously developed nation in the world

I’m not exactly convinced that the non-religious living in Southern States, or for that matter the Muslim community in any state, would actually agree with this claim.

A Holy War of intolerance against all who do not conform has been initiated.

Make no mistake, terms such as “religious freedom” or “religious liberty,” are code words for the enforcement of religious intolerance and discrimination. Concepts such as tolerance and equality are now an endangered species that faces the very real threat of extinction.

The Religious Liberty Task Force is forcibly tasked with giving certain religious people the liberty to believe Jesus hates the same people they do.

[in a Jewish deli]

Why don’t they just call it the Christian Bigotry Protection Force?

Jonathan Wilson-Hartgrove: "As a Christian minister myself, I’m both offended by this abuse of faith and troubled by the lack of moral outrage against it." via @NBCNewsTHINK https://t.co/CeulHIBuLc

There are real implications to the Trump administration’s “religious liberty” policies. Attacking our reproductive freedom is one of them.

We’ll fight to make sure everyone has access to health care without fear of discrimination. https://t.co/cCsIEGN9QF

I want to see the Religious Liberty Task Force fight the Space Force.

AG Sessions’ work to undermine equal protection under the law is a violation of his oath of office; that he’s doing it under the cover of religious liberty is anathema. https://t.co/GuQYlVhE2w

I am delighted that Religious Liberty Task Force will finally protect people who face problems because of their religions: Muslims, Jews, Sikhs and other religious minorities.

What? Oh, this is just about hating gays and forcing people to say Merry Christmas? What a shock.

Can’t wait to get my new outfit from the religious liberty task force! pic.twitter.com/C8OHegdNNR