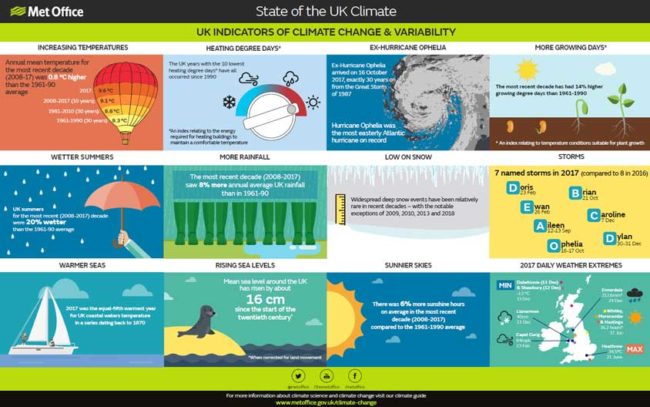 The UK’s Met office has published a full scientific report on the state of the climate in the UK.

The report is a summary of the UK climate in 2017 and places it all within the historical context. It is their fourth such report. The data they have used all comes from the Land-based weather stations managed by the Met office. Now pause and remember that they have records going back to 1659.

A weather report sounds dull, but hey, this is the UK, we love to talk about the weather.

The Climate is Changing

So the key point in highlighting it is this. Their official scientific conclusion based upon hard observational data is …

“Our climate is changing, globally and here in the UK. People may not recall 2017 as having been a particularly warm year, with a relatively wet summer and snow in December. Despite this, when looking at the longer-term perspective 2017 was still more than 1 oC warmer than our 1961-1990 baseline and ranks fifth warmest year overall for the UK.”

It is perhaps also worth highlighting this bit …

Nine of the ten warmest years for the UK have occurred since 2002, and the top ten have all occurred since 1990. The Central England Temperature series, which extends back to 1659, shows that the 21st century (since 2001) has so far been warmer than the previous three centuries.

When it comes to an argument regarding the reality of global warming, then in a UK context your argument is not simply an abstraction. It is the cold hard reality, or to be a tad more accurate, an increasingly warming reality, that is measured using actual readings going back centuries.