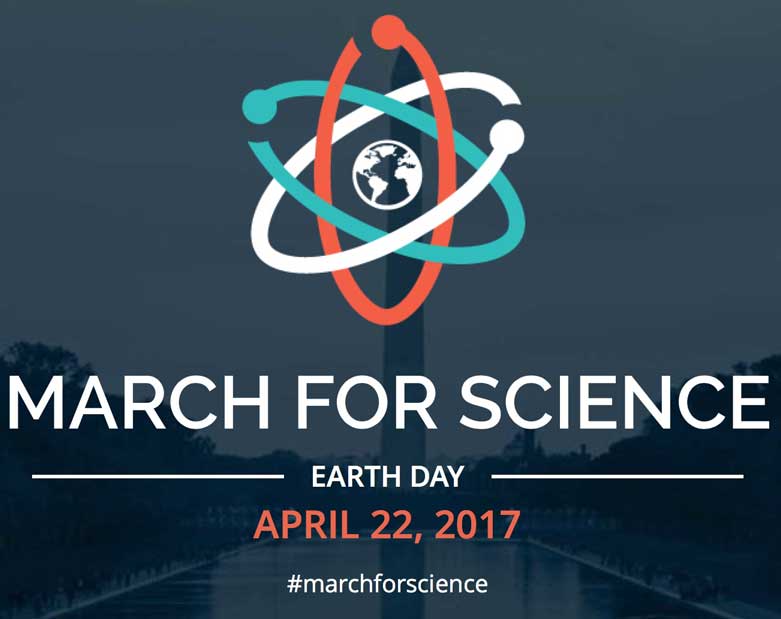 The #MarchForScience is scheduled to happen on 22nd April. The official “March For Science” website explains it as follows …

The March for Science is a celebration of our passion for science and a call to support and safeguard the scientific community. Recent policy changes have caused heightened worry among scientists, and the incredible and immediate outpouring of support has made clear that these concerns are also shared by hundreds of thousands of people around the world. The mischaracterization of science as a partisan issue, which has given policymakers permission to reject overwhelming evidence, is a critical and urgent matter. It is time for people who support scientific research and evidence-based policies to take a public stand and be counted.

We are scientists and science enthusiasts. We come from all races, all religions, all gender identities, all sexual orientations, all abilities, all socioeconomic backgrounds, all political perspectives, and all nationalities. Our diversity is our greatest strength: a wealth of opinions, perspectives, and ideas is critical for the scientific process. What unites us is a love of science, and an insatiable curiosity. We all recognize that science is everywhere and affects everyone.

On the day of the Women’s March on Washington, Jonathan Berman, a biology postdoc at the University of Texas Health Science Center, was reading a Reddit thread discussing an article headlined “All References to Climate Change Have Been Deleted From the White House Website” and saw a small comment. “There needs to be a Scientists’ March on Washington,” a user posted.

“The only way to make things happen is to do them,” Berman says. And so he purchased the web domain MarchForScience.com, and set up a Facebook and Twitter account. And all of a sudden, he had a movement.

The reason for the march is simple: “It’s to send the message that we need to have decisions being made based on a thoughtful evaluation of evidence,” Berman says. The date is now set for Earth Day, April 22, and in addition to the DC event, there are plans underway for dozens of satellite demonstrations around the world.

… Within a week of launching, Berman had 40,000 people sign up to march on the Capitol. The March for Science Facebook group now has more than 800,000 members.

But why do something like this, what evidence is there for such an approach?

Oh come now, you know that when you ask a community of scientists you will get something quite rational as a response …

“Protest is also an opportunity to create what we call ‘collective identity,  It’s about getting sympathizers, people who agree with the cause, to be activists.”

This is of course a networking opportunity for links to be formed between like-minded individuals. For example, the 314 Action group are jumping in and using it as an opportunity to reach out. Their specific goal is to get more PhD holders to run for office. The Earth Day Network folks are in on this as well, they plan to hold a series of “teach-ins”, not just on the Mall, but also at the satellite marches, to help direct the demonstrators’ energy into action.

OK, so let’s tackle the question.

Some do think this is a bad idea

There is a line of thought that the scientific community should remain politically neutral and should not jump into the political arena … ever. As noted by David Sedlak, the editor-in-chief of Environmental Science & Technology …

“[Scientific] community members have legitimate concerns about the implications of environmental activism in the research world because it undermines the standing of academics as objective seekers of truth,”

Others also raise the concern that if science becomes a liberal crusade within the minds of the public, then it becomes very polarised within society. I get the point. If people march wearing “I’m with her” T shirts, then it might indeed fracture a community that does straddle such political lines. It would also of course fail to reach out because this would in the minds of most Conservatives become a reason for instant dismissal.

“A march by scientists, while well intentioned, will serve only to trivialize and politicize the science we care so much about, turn scientists into another group caught up in the culture wars and further drive the wedge between scientists and a certain segment of the American electorate.”

Is there Official Support?

The leading scientific societies are not opposing it and do in general approve of the march. Nevertheless, they are also not contributing, but instead are keeping an appropriate distance to ensure they remain politically neutral, and that is perhaps as it should be.

“You need to separate what an individual citizen scientist should feel free to speak up about compared to the role of scientific societies. Scientific societies need to be talking about the science and not necessarily saying, ‘And here’s what you should do about this particular issue.” – Christine McEntee, CEO of the American Geophysical Union

Should it be supported?

As you can probably tell by reading the above, I’m struggling over this one, and am not willing to just dismiss the wholly valid points that are being raised by some.

At it’s heart it is not only well-intentioned, but it is wholly rational as well. A call for evidence-based policies instead of the currently prevailing emotional based ones makes a lot of sense. I do also applaud the recognition that there is a need to strive to not adhere to a specific political party line, but maintain a wide bridge right across the entire political arena. To that end, the march organisers have made a specific decision to not invite any politicians to speak at the event.

It is also wholly appropriate for there to be a unified stance against an administration that is openly hostile to vast swathes of the scientific community, and that unity need not be specifically Liberal, there is room in that tent for Republicans and Independents. It is a common cause that traverses the traditional political boundaries, what is happening concerns us all.

I’m not convinced that such a unified rational plea would in any way mean anything to people who have abandoned evidence and reason. In other words, as Thomas Payne pointed out …

“To argue with a man who has renounced the use and authority of reason is like administering medicine to the dead.”

Nevertheless, having given it some thought my conclusion is that I do of course support it … I think we all should do so as individuals. This is because it is not just about an attempt to convince those that don’t value reason, it is also a means to bring together those that do, and thus craft a groundswell of support for a better way forward.

1 thought on “Should you support the #marchforscience?”