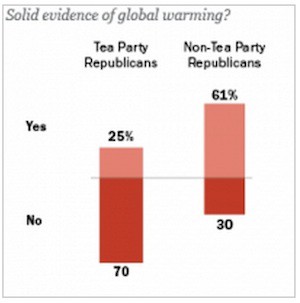 Roughly one year ago Wired ran an article about a vote within the House on an amendment to a debate over construction of the Keystone XL pipeline. The vote would not result in any legislation, but was just a bit of political theatre and was specifically asking if “Climate Change is real and not a hoax.”. Almost everybody gave the nod and said “Yep, it is happening”. Then somebody introduced another amendment asking if human activity was a significant contributor to the aforementioned climate change. The result split right across party lines.

Those who voted  against the prevailing scientific consensus – “no, human activities don’t contribute to climate change“, were all Republicans …

Those who voted “yea, human activities contribute to climate change” where almost all Democrats …

Note that there were a couple of ‘R’ votes in the above, and so not every Republican is out of touch with the reality of what is happening, but clearly the tide within the political arena is indeed rather polarised between those that value evidence and those that can happily ignore it.

Are most Republicans anti-science?

If you engaged and asked that question, most would of course warmly assure you that they are pro-science. If however they then proceed to parrot a stance that is very much at odds with the prevailing scientific consensus, then you would rapidly assign the anti-science tag to them within your mind.

It is perhaps like this for what can be best described as emotional tribal reasons.

Let’s pause for a second and explain that term “scientific consensus”. It might imply to some that there has been some sort of vote within some body that represents science, and that while the majority voted one way, there has been some voting the other way. Er … no … just no, that is not what that term means at all. In the context of Climate Change, the hypothesis that humans are the root cause has been examined and tested and looked at from every angle. Every other possibility has been examined in considerable detail (sun activity, natural variations, etc…) and dismissed because they did not stand when examined and tested. The prevailing conclusion is that we are the cause of what is happening, that is the one and only remaining hypothesis that has not been falsified.

We now live in an age where it is rather clear that when it comes to specific issues then some strands of Republicanism are indeed anti-science and will dismiss this scientific consensus, not because of any conflicting evidence, but because they belong to a political tribe that takes that stance, and it is tribal loyalty and not anti-science that is in play.

The GOP is not unified on the topic of climate change denial at all. What is rather obvious is that many of those that currently hold political power do take that line, but they are not the entirety of the GOP. Polls do reveal that most who would self-identify as Republican do not adopt that stance, it tends to be just the extremists.

To give you a specific example, Mother Jones had an article this week that reports …

a group of Republican luminaries who don’t currently hold public office held a press conference calling for climate action. Specifically, they released a report—titled “The Conservative Case for Carbon Dividends“—in which they advocated a tax on carbon emissions.

Now I don’t mean to go off on a tangent here and examine the merits of their specific proposal. The point is this – these highly influential Republicans clearly do embrace the prevailing scientific consensus that our emission of carbon is a cause for serious concern, so much so, that it demands decisive political action. While they might not agree with specific Democrat proposals on what needs to be done, they do clearly accept the prevailing scientific consensus, and grasp that doing nothing is not an option.

Baker does play the political game well, but then he would, and that perhaps is a reflection of the fact that he was once secretary of state. Take for example his statement at the press conference last Wednesday. Note how he manages to successfully bridge the current polarised divide within the GOP…

“For too long, we Republicans and conservatives haven’t occupied a real place at the table during the debate about global climate change, Instead, we have tended to dispute the fact of climate change and particularly the extent to which man is responsible for any changes in the Earth’s climate. Now I need, in the interest of full disclosure, to tell you that I was and remain somewhat of a skeptic about the extent to which man is responsible for climate change. But I do think that…the risks are too great to ignore, and that we need some sort of insurance policy.”

He clearly knows that if he goes full-science he would lose his audience, and so he rather wisely is not prepared to do that. This is because he is a political pragmatist, and so he clearly offers a sup to those that do dismiss the consensus.

I’m personally inclined to lean towards the thought that he really does grasp how serious it is, and is attempting to steer them in the right direction. Sadly, even with his pragmatic approach, nobody within the current administration is going to listen.

I need not tell you something you most probably already do know far too well, but for the sake of completeness, yes, those in power did indeed pickup up on that Daily Mail article, and are using it to carry us all over the cliff …

There’s a very different conversation underway in the House, where Republicans are obsessed with finding a smoking gun that would expose global warming as a myth. Lamar Smith (R-Texas), who chairs the science committee, held a hearing yesterday titled “Making EPA Great Again,” during which he and his colleagues accused federal agencies of falsifying data and pushing a climate hoax.

Smith cited allegations made by former NOAA data scientist John Bates that the agency mishandled data used in a 2015 study challenging the belief that global warming had “paused” in recent years.

“Everything I have read suggests that NOAA cheated and got caught,” Smith said. At another point, he said NOAA scientists wanted to “falsify data to exaggerate global warming.”

The “Everything I have read” would imply that Mr Smith has a highly selective list of reading material, because the evidence out there is that his rather dubious source has been robustly debunked by numerous and very credible sources.

Tribal membership can invoke strong emotional reactions. For a Democrat, anything and everything Republican is deemed backward, irrational and absurd. You can swap those labels around and the observation holds, it really is that polarised now. Well yes, if we are honest, much of what we see from the Republican camp these days is indeed regressive, irrational and absurd. The fact that Democrats see it for what it is can still perhaps blind them to the observation that many non-Tea Party Republicans are simply being carried by the new extremists who are leveraging and manipulating tribal loyalty.

The extremists now hold power, but they are not the entirety of Republicanism. We should perhaps also remind ourselves that this is the same party that was Abraham Lincoln’s. In 1864 they took a very progressive and bold step by passing the Thirteenth Amendment to abolish slavery.

There are still good people out there who can be reasoned with and with whom it is possible to work together on common causes. A powerful argument that can win them over will potentially be the string of broken promises and failed pledges that are now inevitable due to the promotion of utterly absurd and completely unworkable directives.