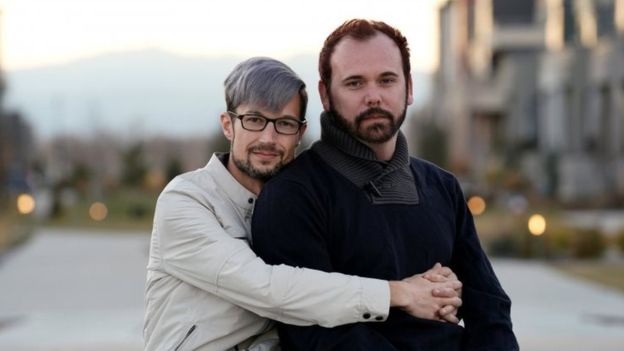 A legal case that has been trundling its way through the US system has finally reached the US supreme court and had a hearing last Tuesday (5th Dec). The essence of this concerns a couple named Mr Mullins and Mr Craig, pictured above, who went into the Masterpiece Cakeshop in Lakewood, near Denver back in 2012 owned by a Mr Phillips (pictured below). Their attempt to order a cake was refused and so that set in motion a chain of legal events that has now finally reached the highest court in the land.

What exactly is the issue here? 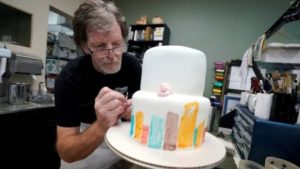 Mr Phillips is not the first religious person in history who has found himself being asked to perform tasks that conflicted with his specific religious beliefs, for example …

Actually US Federal law is rather clear and also well established. The 1964 Title VII of the federal Civil Rights Act directs employers to accommodate religious employees on the understanding that doing so does not cause any “undue hardship,” (translation: costs an excessive sum to sort out). So what this means is that normally people work things out by simply delegating – “I’m sorry Mr Smith, I’m afraid I’ll not be able to assist, but my colleague over here will be right over to help you“

The interesting twist here is that because Mr Phillips owns the bakery he is implementing his personal beliefs into a formal business policy and would thus require all his employees to adhere to that. He may in fact have no other employees, and might indeed be a sole trader, so where do things then stand?

Well, that’s why this case has reached the supreme count, because they now need to work that out.

There are many myths in play here

Interestingly enough, if you read some of the news coverage there are popular myths floating about that do muddle things up and so it is wholly appropriate to debunk a few of those.

Andrew L. Seidel, a civil rights and constitutional attorney, has written up the details and that greatly helps to clarify things and so eliminate these “alternative facts”.

Claim: “The baker agreed to sell them a standard cake off the shelf, he just didn’t want to design a custom, gay wedding cake.”

The couple went into the bakery. They were not there long before the baker realized they were a gay couple. At that point, the baker refused to serve them. The refusal was not because of what they wanted on their cake—they never even discussed the design—but only because they were gay. It was only later on, after the case had commenced, that the baker said he would sell them a bland, undecorated cake.

Claim: “The baker was refusing to make a gay themed cake”

Claim: “It’s about free speech! You can’t force someone to speak in support of gay weddings!”

this argument is all based on a dubious assumption, that cakes are speech. When I order a meal at a restaurant, no matter how fancy or delicious, no matter how much a chef prides himself on the presentation or the unique flavor profile, I’m not wondering what message the chef is sending me with the food. I just want it to taste good.

Claim: “You can’t force a baker to participate in a gay wedding!”

The participation argument is even more absurd when we consider a fact I didn’t mention above: That the couple was already legally married. They were married in Massachusetts, so the bakery wasn’t going to participate in the wedding, just a celebration, though the same could be said of almost any baker. The cake doesn’t feature at the wedding, only at the reception.

Claim: “But it violates the bakery’s religion!”

Now this is perhaps the key bit here, the crux of the matter. Here is where the supreme court could in effect redefine religious liberty.

Does having a particular belief give someone the right to act on that belief when the belief is religious, no matter what its impact on others?

the right to believe as we choose has never encompassed a right to act as we choose. Never has a citizen’s right to the free exercise of religion under the First Amendment — let alone a corporation’s — been understood to include the ability to engage in conduct that infringes on the rights of others.”

In essence you right to act according to your right to believe whatever you wish ends where the rights of others begins.

if religion mandates picking pockets and breaking legs, it comes under the purview of our secular law. And no belief, no matter how fervent, should change that. There is no religious right to infringe the rights of others.

It gets even more bizarre when you realise that this is about a legal entity, a bakery, utilising a religious belief to impact other people. If the right-wing of the US supreme court swings in favour of the bakery it would in effect radically alter things by allowing a commercial enterprise, which exists to sell a product and make money, to have a religious belief and to act on that belief.

This is a very high-profile supreme court case

Here is the core of everything – this case, and others like it, is why many evangelicals support morally dubious individuals like Trump and Roy Moore. Vote in the GOP, no matter how abhorrent they are as individuals and in return get vacant US Supreme court seats stacked in their favour and packed with right-wing believers – it sets the tone of things, not just for the next 2 or 4 years, but for generations. They are playing a long game.

The arguments presented in the Supreme court are available on-line, you can read them here. (102 pages)

The New York Times outlines how the hearing played out …

Tuesday’s argument, which lasted almost 90 minutes instead of the usual hour, appeared to divide the justices along the usual ideological lines.

The more liberal justices questioned whether all sorts of people — tailors, hair stylists, makeup artists, chefs, architects — could refuse to supply goods and services for same-sex weddings. Conservative justices considered whether artists can be required to convey messages with which they profoundly disagree.

Ms. Waggoner said her client was an artist who creates “a temporary sculpture” when he makes a wedding cake. On the other hand, she said, “the tailor is not engaged in speech, nor is the chef engaged in speech.”

Justice Sonia Sotomayor also seemed unpersuaded. “When have we ever given protection to a food?” she asked.

Justice Stephen G. Breyer said that there was no way to rule for Mr. Phillips without inflicting grave damage on principles of equality. “The reason we’re asking these questions,” he said, “is because obviously we want some kind of distinction that will not undermine every civil rights law.”

This is a key social decision

If it swings one way then it opens the door for a number of businesses to invoke religious belief to refuse service.

If you are still struggling with this and think that it might be wholly appropriate, then consider this. If a business refuses service to an interracial couple or even somebody because that holds a different belief, for example Muslim, would you be OK with that?

Not getting a cake from a specific bakery is not exactly the end of the world, but it does set a very disturbing precedent if that was granted legal status. What if a gay couple also can’t get food from the only supermarket in town, or gas from the only gas station in town? What if the issue is not simply a gay issue, but also ripples into other civil liberties and the race card is played as a deeply held religious belief?

What if you are a right-wing evangelical Christian and the business owners invoke their right to not serve you because of their deeply held different religious beliefs, would you be OK with that?

Not All Religious people …

One further point. While a majority right-wing evangelicals (about 65%) might be homophobic bigots, many other religious people are not. As explained by the Washington Post …

Ahead of Tuesday’s decision, more than 500 Christian leaders signed a statement declaring that “religious freedom should never be used as a justification for discrimination.”

“For me as a Christian pastor,” Jennifer Butler, Presbyterian minister and CEO of the advocacy group Faith in Public Life who signed the statement, told The Washington Post, “what’s at stake is the heart of the Christian faith. We can’t be following Jesus if we’re slamming doors in our neighbor’s faces.”

And the decision is?

The justices will now very carefully ponder over it all and debate amongst themselves. There will be no final decision until about next spring. That is, if you will forgive the pun, not a piece of cake – they are clearly very divided this.