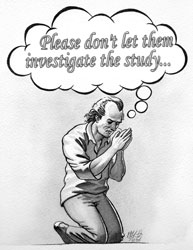 Categories for Scientific studies into Prayer

Scientific studies for anything, and that includes prayer, can be dividend up into the following three categories:

So working backwards up that list, lets take a quick look at an example of a scientific study of prayer from each of the above categories.

There are studies out that that claim to demonstrate that prayer is indeed effective, but when reviewed you soon find serious flaws. Take for example a 2001 study of Presbyterian ministers by Meisenhelder and Chandler; it claimed that the level of prayer correlated with the health of the various ministers, so they concluded that there was something interesting going on. Actually no, the data was gathered by simply sending a survey by post to the various ministers. All it reports is that their self-reported frequency of prayer was well-correlated with the self-reported perception of their health.

“Frequency of Prayer and Functional Health in Presbyterian Pastors”. – Journal for the Scientific Study of Religion

There are no hard facts here are all, we have no way of verifying that the claimed frequency of prayer is factual, and we have no information on the actual health of the individuals, just their own opinion. The scope for subjective bias is simply too great for any objective conclusions to be drawn from this.

When presented with a claim from a study, any study, do not take the results at face value, especially if it is asserting evidence for something truly extraordinary such as the supernatural (prayer) …

If the normal scientific controls have not been applied, then any claimed result is simply an illusion, the researchers have ended up fooling themselves – scientific controls exist for a reason. For this and other similar flawed studies, we need not question the ethics of those conducting the study, just their competence.

People are desperate to believe and so it comes as no surprise to find that some of the claimed successes are completely fraudulent.

Back in 2001 the Journal of Reproductive Medicine published the results of a study that was run by three Columbia University researchers. It examined the effects of prayer for women who were undergoing in vitro fertilization-embryo transfer (IVF-ET) and claimed that those that had been prayed for doubled their success rate.

The journal has since redacted the paper, but you can still find a copy here : http://www.uic.edu/classes/psych/Health/Readings/Prayer%20-%20in-vitro%20fertilization,%20JrRepMed-Skeptical%20Inquirer.doc

A doubling of the fertility rate by just applying prayer is an astonishing claim, and if factually correct, would indeed verify the effectiveness of prayer. Columbia university agreed with that thought, so they issued a press release announcing it all and also asserted that the study had been carefully structured to eliminate any human bias. As a result it attracted the attention of skeptics such as Bruce Flamm, a clinical professor of gynaecology and obstetrics at the University of California at Irvine; what he discovered was outright fraud.

He discovered not only that the experimental procedures were seriously flawed, so much so that the results are meaningless, but also that some of the supposed authors of the paper were frauds.

The first-named author Kwang Y. Cha ignored all questions and refused to respond to any inquiries. The second, Daniel Wirth, a.k.a. John Wayne Truelove, was not a medical doctor at all, but had an M.S. in a rather dubious bit of quackery known as parapsychology. He was later indicted on felony charges for mail fraud and theft, which was committed at the time the study; he plead guilty and was sentenced to five years.

Could it get any worse for this study? Actually yes it could, an investigation by the U.S. Department of Health and Human Services (DHHS) revealed that the study’s lead author, Dr. Rogerio Lobo, had nothing to do with the actual study at all, his sole contribution was to provide a bit of editorial assistance six to twelve months after the study had been completed.

This is a seriously flawed and completely fraudulent study that sadly remained up on the publishers web site for a period of two years and as a result was cited by faith healers as a shining example of “healing” research of the highest scientific quality, when it is in fact a complete sham. It has been cited 155 times as “evidence” despite the fact that it has been redacted and withdrawn.

An example of a good study is the 2005 MANTRA (Monitoring and Actualisation of Noetic Trainings) II study run by Duke University which looked at a range of different intercessions such as intercessory prayer and other healing practises such as Music, Imagery, and Touch (MIT). During the three year period it ran for they deployed both prayer and MIT to about 748 cardiology patients using rigorous scientific protocols and ended up with null results.

The authors of the study noted ..

Another good example is the 2006 “Study of the Therapeutic Effects of Intercessory Prayer” (STEP), also commonly called the “Templeton Foundation prayer study” because they funded it, or simply the “Great Prayer Experiment”, and was quite a rigorous investigation that was led by Harvard professor Herbert Benson. Starting with 1,802 coronary artery bypass surgery patients at six hospitals, they randomly split them into three groups and proceeded as follows:

It has been speculated that the results of Group 3 may have been stress related, when told they would be prayed for, individuals may have begin to think “am I so sick they had to call in their prayer team?”

What is completely clear is not only that prayer simply did not work, but also that those who were not prayed for did a lot better.

The fact that a study exists and asserts a supposedly scientific result is not sufficient, you need to ask yourself if it is in fact a credible study. The results for any studies that are bad (fraudulent), or ugly (not really scientific at all) can be discarded, only the good once (truly scientific) are reliable. While this has been illustrated using studies into prayer, it can be applied to any topic that is being investigated.

“in the entire history of modern science, no claim of any type of supernatural phenomena has ever been replicated under strictly controlled conditions.” – Bruce L. Flamm, clinical professor of obstetrics and gynecology; University of California, Irvine

1 thought on “Scientific Studies of Prayer – the good, the bad, and the really really ugly.”