It has taken us 35 years to get there, but finally we are now beginning to explore the heliosheath depletion region.

Voyager 1, launched over 35 years ago, is at the fringe of the solar system and is now in a new region — not quite out, but not quite in at the same time – so the scientists working on Voyager are calling this place the “heliosheath depletion region”. 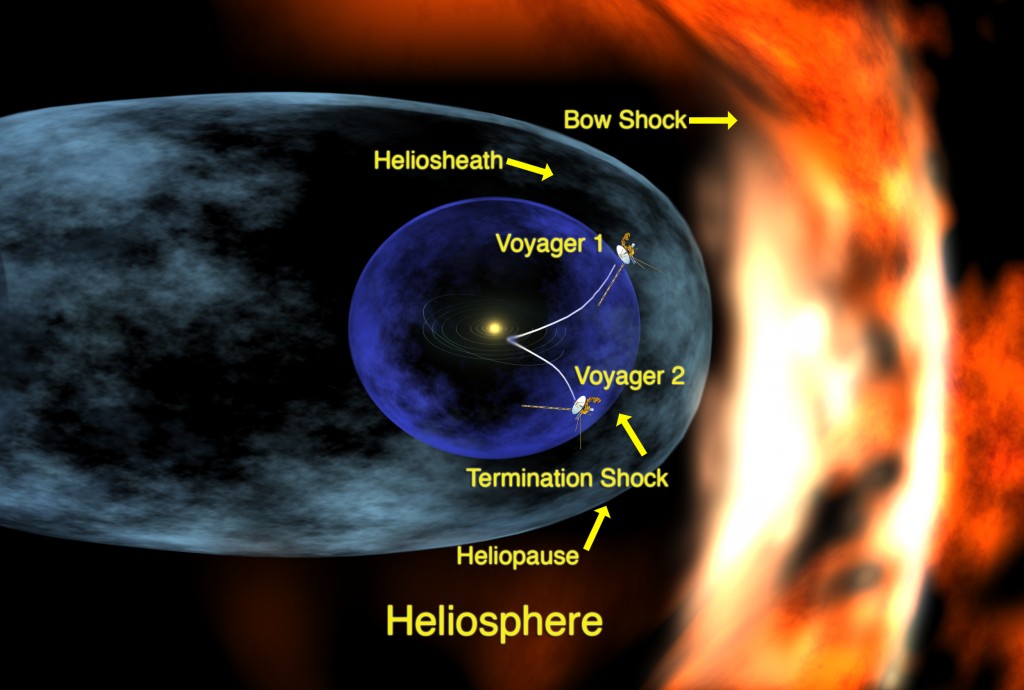 So why is this news? Basically because three new papers have been published about it all

Claims that Voyager is just about to exit the solar system have been around for some time now … and yet so far it has still not done so, basically because we have no clear understanding of where the boundary of the solar system is – only that it is marked by the edge of a magnetic bubble known as the heliopause. Voyager has been near this boundary, in an area called the heliosheath, since 2005 and yet still no exit. However the detected conditions have changed since 2005 and so this latest phase has been given the weird “heliosheath depletion region” name because the conditions in this region are different than those initially detected upon entry to the heliosheath.

So what exactly is different?

What is interesting is that we can now tick two of those boxes, the second and third, because Solar particles are down, cosmic rays are up, and yet we are still missing that crucial change in direction from the magnetic field.

Paper 2 Search for the Exit: Voyager 1 at Heliosphere’s Border with the Galaxy

Krimigis, who heads the Low Energy Charged Particle instrument team, and his colleagues, report a huge decrease in particles from the sun on 25 August 2012, along with a steady increase in cosmic rays from outside the solar system since Voyager 1 entered the newly-named heliosheath depletion region.

Ed Stone and colleagues, looks at the 25 August change using data from a different instrument, noting again that low-energy ions from the heliosphere suddenly vanished and were replaced by an influx of cosmic rays.

We are not yet an Interstellar species

We are still waiting, watching, and exploring this new region, and still no change in the magnetic field, so we cannot yet declare ourselves to be the first species from this planet to become  interstellar.

Hopefully we will not have to wait too long, because Voyager’s power supply is running down and by about 2020 in seven years, one instrument will need to be turned off. Exactly which one is as yet undecided, but it would be nice if it was the magnetometer because it was no longer needed.