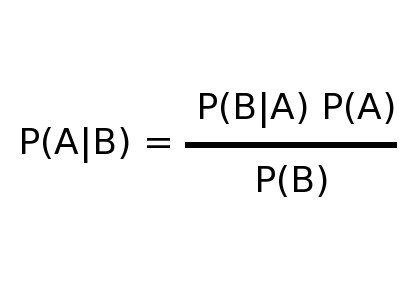 Bates theorem is named after the Rev. Thomas Bayes (1701–1761), who first formulated it. It is essentially a statistical tool that allows you to work out the probability of something.

Let’s quickly illustrate how it works. If you wanted to work out the probability that somebody has cancer and you knew how old they were then you could use the information you have, their age,  to determine the cancer probability.

The Wikipedia on it all article covers this example …

Next, suppose we find out that person is 65 years old. If we assume that cancer and age are related, this new piece of information can be used to better assess that person’s risk of having cancer. More precisely, we’d like to know the probability that a person has cancer when it is known that they are 65 years old. This quantity is known as the current probability, where “current” refers to the theorised situation upon finding out information about the particular case at hand.

Knowing this, along with the base rate, we can calculate that a person who is age 65 has a probability of having cancer equal to

It may come as a surprise that even though being 65 years old increases the risk of having cancer, that person’s probability of having cancer is still fairly low. This is because the base rate of cancer (regardless of age) is low. This illustrates both the importance of base rate, as well as that it is commonly neglected.[3] Base rate neglect leads to serious misinterpretation of statistics; therefore, special care should be taken to avoid such mistakes. Becoming familiar with Bayes’ theorem is one way to combat the natural tendency to neglect base rates.

We have people using this statistical tool to work out the probability of historical events, and so here are a few examples.

Clearly something is very very wrong here because Bayes Theorem has established two mutually exclusive conclusions as true. How can Jesus not actually exist at all and at the same time have actually risen from the dead?

What is wrong here is that Bayes Theorem is not being used correctly by either Craig or Carrier and is instead being grossly abused.

How many historians, apart from Carrier, use Bayes Theorem to establish the probability of any historical events?

None that I’m aware of, and there is a reason for that.

That reason is not because they are mathematically illiterate but rather is a reflection of the fact that a tool such as this will only function in a meaningful way if you have hard solid data to plug into it. If, for example you wished to determine the probability of something happening, then you can use cold hard facts such as how often has it happened before and with what frequency it has happened before.

What about those questions

OK, my intent was not to examine the Jesus question, but for the sake of completeness, let’s briefly examine that a bit.

Evidence that he rose from the dead is exactly zero. It is just a religious belief.

It is highly probable that Jesus did exist. The general consensus amongst historians (and I’m not talking about religious ones) is that a real human resides under the layers of supernaturalism and religious beliefs. A similar example is that Joseph Smith was also quite real historically, but the claims asserted by him and by the Mormon church are not factual.

The primary point here is this. Bayes Theorem can be used but also abused. If faced with somebody touting sciency sounding maths as proof regarding something, then don’t just roll with it, because the concluson being promoted will only be as good as the raw foundational data itself, and if that is itself dubious, then you can be sure that the conclusion is as well. The story of Rumpelstiltskin weaving gold from straw is myth, but apparently that has not stopped others from giving it a go.