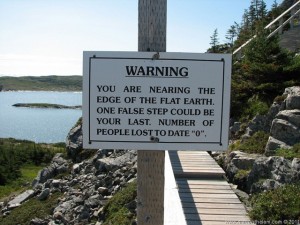 The simple one word answer is “Yes”, I was writing about this a few days ago and clarified that the Quran does indeed promote a flat-earth view. There are many verses such as the following …

15:19 And the earth We have spread out (like a carpet); set thereon mountains firm and immovable; and produced therein all kinds of things in due balance.

20:53 He Who has, made for you the earth like a carpet spread out; has enabled you to go about therein by roads (and channels); and has sent down water from the sky.” With it have We produced diverse pairs of plants each separate from the others.

50:7 And the earth- We have spread it out, and set thereon mountains standing firm, and produced therein every kind of beautiful growth (in pairs)

The above is only a sample, there are lots more similar references.

Does any of this actually matter?

Yes, it truly does, when you believe that the quran is perfect and every word is promoted by a god for you to obey, then you quickly find that you are using it to justify some truly abhorrent stuff such as …

What is important about the flat-earth statements within the quran is that here we have hard irrefutable proof that this book is not authored by a god and contains stuff that is factually wrong. If it is wrong about the earth being flat then it is clearly crazy to use it to justify all the violence and intolerance.

So what are the counter arguments presented by Islamic Apologists when you point out a flat earth?

It is not really saying the earth is flat?

This is no straw-man, it is an actual quote … (forgive his spelling)

If i Say About 1 Mile Square Area refered “Flat” in My discusion E.g My Best Friend ask me TO have One acre of Area, I Say him loud, ” that , my dear Friend, whole flat Terotery is yours , Dont think in acres, they are Miles” so David Here word Flat Dosnt Mean Whole earth is Flat,as concerned with wiki, so i totaly agree with him, If Tow people listening me and my friend nearby suposed my refred word 4 whole earth, thy may thier own misconception or way of inovation to undrstand. If one person debate and say 4 mile squir is refred flat, and one say whole earth is flat, refring my discusion to My friend, and about thier whole Quaral

The rebuttal to my observation regarding the quran describing the earth as flat is essentially to argue that the references in the quran are relative and localized. He illustrates this by pointing  out that if you take an area of say 1 sq mile, it is flat.

The rather obvious response to that is to point out that the flatness described by the quran is applied to the entire earth and not just a local area.

He Who has, made for you the earth like a carpet spread out; has enabled you to go about therein by roads (and channels); and has sent down water from the sky.” With it have We produced diverse pairs of plants each separate from the others.

And just to clarify that for you مَهْدًا = mahdan = (Noun) cradle or bed, (verb) flatten, smoothen, smooth, level, cement, grade, ram, plane, roll, flat, level off … is not applied here to a local area, but to the entire earth.

Clearly for this flatness there is no localised qualifier.

The Quran mentions the actual shape of the Earth as round, not flat

“He Who has made for you the earth like a carpet spread out; has enabled you to go about therein by roads (and channels)….” The Holy Qur’an, Chapter 20, Verse 53

Brother david there was no gramer when quran was written and all gramers are drived from quran. No where in the Quran is it mentioned the Earth is flat. I just queted the example. Actually the Quran specifically mentions the Earth is egg shaped.The Qur’an mentions the actual shape of the earth in the following verse:

Taking One Verse as consequence and leaving other Is also an amazing degree of dishonesty.

Humm, the cognitive dissonance is strong in this one.

So has anybody seen a spherically shaped area that has had a carpet rolled out on it … ever?

He then quotes a verse that he claims declares the earth is shaped like an egg, so lets take a really close look at that. The claim here is that 79:30 reads “And we have made the earth egg shaped”, but does it?

Nope, it does not, his claimed translation is the true dishonesty here, the quran says no such thing.

Literal: And the earth/Planet Earth after that He blew and stretched/spread it.

What is going on here is that a couple of translations have attempted to translate the word dahaha to mean made egg-shaped or like an ‘ostrich egg’, but that is wrong. The attempt to justify this is to claim that the root word for dahaha is duhiya which means ostrich egg, but even that is not correct either.

In Arabic, each word must be derived from its root. The root usually consists of three letters that can be manipulated, by adding vowels, prefixes and suffixes in order to produce different words with different meanings. For example, “ka-ta-ba” (to write) is the root for many words such as kitab (book), maktaba (library), katib (author), maktoob (written), kitabat (writings), etc…

Let’s now take the word mentioned to mean egg of an ostrich, “Duhiya”. This word is not a root. It is a noun and is derived from “da-ha-wa”, the same root that the verb “dahaha” comes from. Furthermore, Duhiya does not even mean the egg of an ostrich.

To daha the earth means to spread it out, there is no egg shape here at all, and that is why most good translations correctly render it as streatched or spread.

We are right back to a flat earth once again.

The Quran does indeed assert that the earth is flat, and this is quite obviously wrong. The claim that the Quran is perfect and never wrong does not withstand any fact-based criticism. This of course is just one example, there are many other similar factual inaccuracies … humans are not made of clay, the moon never split in two, jinns are not real, the sun does not set in a muddy pool when it sets, and thunder is not an angel.

The real issue here is not that a text from the seventh century contains some archaic and factually wrong information, that is exactly what we would expect. Instead, the issue is that this exact same text which is full of mistakes, is claimed to be perfect and must be obeyed. The result of such obedience is homophobia, violence, and intolerance, and that is why the assertion of perfection needs to be challenged, because while this myth of divine unchallengeable scribblings prevails, real harm results.

“The earth is flat. Whoever claims it is round is an atheist deserving of punishment.”
—Sheik Abdul-Aziz Ibn Baaz, supreme religious authority of Saudi Arabia, 1993

206 thoughts on “Does the Quran really state that the earth is flat?”