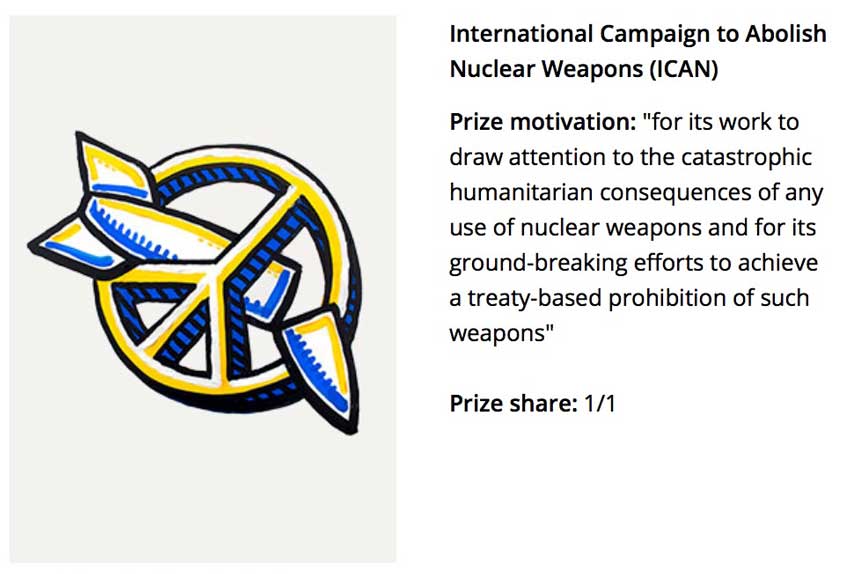 If you want to know about this year’s winner, just jump around my preamble by scrolling down.

“Peace” is perhaps the joker in the Nobel pack because this is the award that has often resulted in what can be best described as WTF moments. The other awards are worthy of attention because they spotlight work that is truly fascinating, insightful, and inspirational. Peace does at times fill that role as well … but not every time.

… and goes on to specify that the prize is to be awarded by a committee of five people chosen by the Norwegian Parliament. The other Prizes, are (as he also stipulated) decided by the Swedish science academies, and so involve a great deal more rigour. (Hint: Members of science academies tend to know a bit about science and thus can make good choices, which they usually do). “Peace” is by its very nature of being choose by a parliament very subjective and also highly politicalised.

So why did Nobel create a Peace prize?

To illustrate what I’m getting at, let’s look back and see how it has all played out …

What perhaps makes the award even weirder is that Mahatma Gandhi never won. If anybody should have, then it was him. He was nominated in 1937, 1938, 1939, 1947, but never received it. That specific non-award has been publicly regretted. Geir Lundestad, Secretary of Norwegian Nobel Committee, said in 2006 …

It is perhaps almost impossible for this to not be a political award.

Having said all that, it is not all bad because sometimes they do get it right by spotlighting somebody truly inspirational and is in the long view a great peacemaker. For example Nelson Mandela, or Martin Luther King Jr. (You can find a full list of past winners here)

Who Won this year?

While not within their remit because it is once again not a specific human, it is still a good choice. 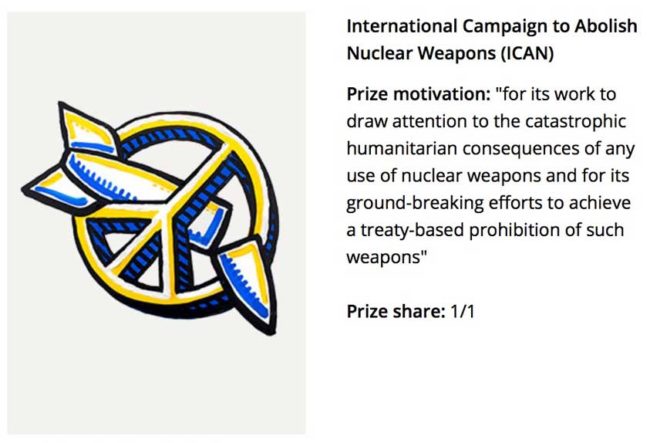 “for its work to draw attention to the catastrophic humanitarian consequences of any use of nuclear weapons and for its ground-breaking efforts to achieve a treaty-based prohibition of such weapons”.

The Norwegian Nobel Committee has decided to award the Nobel Peace Prize for 2017 to the International Campaign to Abolish Nuclear Weapons (ICAN). The organization is receiving the award for its work to draw attention to the catastrophic humanitarian consequences of any use of nuclear weapons and for its ground-breaking efforts to achieve a treaty-based prohibition of such weapons.

We live in a world where the risk of nuclear weapons being used is greater than it has been for a long time. Some states are modernizing their nuclear arsenals, and there is a real danger that more countries will try to procure nuclear weapons, as exemplified by North Korea. Nuclear weapons pose a constant threat to humanity and all life on earth. Through binding international agreements, the international community has previously adopted prohibitions against land mines, cluster munitions and biological and chemical weapons. Nuclear weapons are even more destructive, but have not yet been made the object of a similar international legal prohibition.

Through its work, ICAN has helped to fill this legal gap. An important argument in the rationale for prohibiting nuclear weapons is the unacceptable human suffering that a nuclear war will cause. ICAN is a coalition of non-governmental organizations from around 100 different countries around the globe. The coalition has been a driving force in prevailing upon the world’s nations to pledge to cooperate with all relevant stakeholders in efforts to stigmatise, prohibit and eliminate nuclear weapons. To date, 108 states have made such a commitment, known as the Humanitarian Pledge.

Furthermore, ICAN has been the leading civil society actor in the endeavour to achieve a prohibition of nuclear weapons under international law. On 7 July 2017, 122 of the UN member states acceded to the Treaty on the Prohibition of Nuclear Weapons. As soon as the treaty has been ratified by 50 states, the ban on nuclear weapons will enter into force and will be binding under international law for all the countries that are party to the treaty.

The Norwegian Nobel Committee is aware that an international legal prohibition will not in itself eliminate a single nuclear weapon, and that so far neither the states that already have nuclear weapons nor their closest allies support the nuclear weapon ban treaty. The Committee wishes to emphasize that the next steps towards attaining a world free of nuclear weapons must involve the nuclear-armed states. This year’s Peace Prize is therefore also a call upon these states to initiate serious negotiations with a view to the gradual, balanced and carefully monitored elimination of the almost 15,000 nuclear weapons in the world. Five of the states that currently have nuclear weapons – the USA, Russia, the United Kingdom, France and China – have already committed to this objective through their accession to the Treaty on the Non-Proliferation of Nuclear Weapons of 1970. The Non-Proliferation Treaty will remain the primary international legal instrument for promoting nuclear disarmament and preventing the further spread of such weapons.

It is now 71 years since the UN General Assembly, in its very first resolution, advocated the importance of nuclear disarmament and a nuclear weapon-free world. With this year’s award, the Norwegian Nobel Committee wishes to pay tribute to ICAN for giving new momentum to the efforts to achieve this goal.

The decision to award the Nobel Peace Prize for 2017 to the International Campaign to Abolish Nuclear Weapons has a solid grounding in Alfred Nobel’s will. The will specifies three different criteria for awarding the Peace Prize: the promotion of fraternity between nations, the advancement of disarmament and arms control and the holding and promotion of peace congresses. ICAN works vigorously to achieve nuclear disarmament. ICAN and a majority of UN member states have contributed to fraternity between nations by supporting the Humanitarian Pledge. And through its inspiring and innovative support for the UN negotiations on a treaty banning nuclear weapons, ICAN has played a major part in bringing about what in our day and age is equivalent to an international peace congress.

It is the firm conviction of the Norwegian Nobel Committee that ICAN, more than anyone else, has in the past year given the efforts to achieve a world without nuclear weapons a new direction and new vigour.