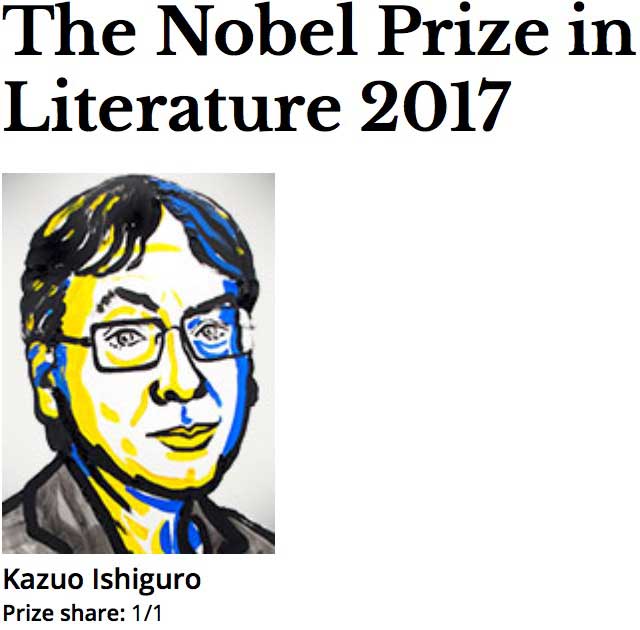 “who, in novels of great emotional force, has uncovered the abyss beneath our illusory sense of connection with the world”.

This is a good choice, it is back to normal after last year’s rather unusual selection.

The award to Bob Dylan last year was a nomination that left many jaws bouncing off the floor in utter shock. Many past winners have of course all been notable well-known authors whose word-crafting skills have been appropriately recognised. Examples include John Steinbeck, Ernest Hemingway, William Faulkner, Winston Churchill, Rudyard Kipling, William Butler Yeats, George Bernard Shaw, T. S. Eliot, Bertrand Russell, Boris Pasternak, William Golding, Doris Lessing, and many more. If you read, then even if you have not read something specific by them, they will most probably all be names that you do recognise.

There is also one rather fatal structural flaw within the entire process. Only one award for one individual is given each year and that leaves many others who not only merit such an award, but the very lack of one, is almost akin to a travesty. To leave Leo Tolstoy, Mark Twain, James Joyce, Anton Chekhov, Marcel Proust, Henry James, W. H. Auden, Graham Greene, Salman Rushdie, Arthur Miller, Philip Roth, and many others, unrecognised is not a criticism of any of their works, but is instead best noted as a flaw within the Nobel Literature award process.

Who is Kazuo Ishiguro?

Kazuo Ishiguro was born on November 8, 1954 in Nagasaki, Japan. The family moved to the United Kingdom when he was five years old; he returned to visit his country of birth only as an adult. In the late 1970s, Ishiguro graduated in English and Philosophy at the University of Kent, and then went on to study Creative Writing at the University of East Anglia.

Kazuo Ishiguro has been a full-time author ever since his first book, A Pale View of Hills (1982). Both his first novel and the subsequent one, An Artist of the Floating World (1986) take place in Nagasaki a few years after the Second World War. The themes Ishiguro is most associated with are already present here: memory, time, and self-delusion. This is particularly notable in his most renowned novel, The Remains of the Day (1989), which was turned into film with Anthony Hopkins acting as the duty-obsessed butler Stevens.

Ishiguro’s writings are marked by a carefully restrained mode of expression, independent of whatever events are taking place. At the same time, his more recent fiction contains fantastic features. With the dystopian work Never Let Me Go (2005), Ishiguro introduced a cold undercurrent of science fiction into his work. In this novel, as in several others, we also find musical influences. A striking example is the collection of short stories titled Nocturnes: Five Stories of Music and Nightfall (2009), where music plays a pivotal role in depicting the characters’ relationships. In his latest novel, The Buried Giant (2015), an elderly couple go on a road trip through an archaic English landscape, hoping to reunite with their adult son, whom they have not seen for years. This novel explores, in a moving manner, how memory relates to oblivion, history to the present, and fantasy to reality.

Apart from his eight books, Ishiguro has also written scripts for film and television.