A label that some of the religious will often deploy is the term “Atheist Fundamentalist”, but this is a meaningless combination of words.

So what do the above describe?

You might for example infer that such combinations apply to individuals who have a specific cultural heritage, but do not actually believe, and that perhaps is as close to any real meaning you could possibly glen. I’d argue against even that, because the words “Christian” and “Muslim” do indeed describe individuals who to one degree or another adhere to some strand of religious belief, and yet the word “Atheist” then effectively sets the degree of belief to zero so so nullifies the religious term.

What does the word “Fundamentalist” actually mean?

It has its origins within Christianity and was originally coined as an attempt to discard all that was not part of the core of the belief and get back to the basic fundamentals (hence the term).

Fundamentalism, in the narrowest meaning of the term, was a movement that began in the late 19th- and early 20th-century within American Protestant circles to defend the “fundamentals of belief” against the corrosive effects of liberalism that had grown within the ranks of Protestantism itself. Liberalism, manifested in critical approaches to the Bible that relied on purely natural assumptions, or that framed Christianity as a purely natural or human phenomenon that could be explained scientifically, presented a challenge to traditional belief.

A multi-volume group of essays edited by Reuben Torrey, and published in 1910 under the title, The Fundamentals, was financed and distributed by Presbyterian laymen Lyman and Milton Stewart and was an attempt to arrest the drift of Protestant belief. Its influence was large and was the source of the labeling of conservatives as “fundamentalists.”

Language evolves and while the above may indeed be the original meaning of the word, the generally accepted meaning today is any unquestioned adherence to fundamental principles or beliefs, and is often used to express contempt.

So what exactly is Atheist Fundamentalism?

An atheist is an individual who does not believe in a god, and that is it, that is all there is, so we can of course ignore the rather strange Christian assertions that often pop up – “Oh you do secretly believe you are simply rejecting god” – which is about as credible of accusing those that do not believe in the tooth fairy as secret believers who are in rebellion against the tooth fairy.

Perhaps John believes in a divine foot just on Tuesdays, and Mary does not believe all the time.

What are the doctrines of Atheism?

It is not a movement, nor is there an official book, and there are no clerics. Instead it is a conclusion regarding one specific question … “Is there a god?” – “No”. That’s it, that is the entire scope and it says nothing about anything else, there are no atheist rules or commandments, and it is not a methodology or a moral code.

What is often true is that atheists are often also humanists and also skeptics, tend to be democrats, pro-science and also pro-choice, but there are always exceptions to all of these. When it comes to the god question, individuals may agree on the “No god” conclusion, but then when faced with other issues, agree on little else.

How does the term “Atheist Fundamentalist” get deployed?

Generally it is a word that is applied to atheists that are publicly vocal and openly criticise religious beliefs, and that is a rather stark contrast to the normal application of the word when describing religious fundamentalists. In a religious context, we tend to think of it as describing those that promote an unacceptable degree of intolerance that manifests as a suppression of basic human rights, misogyney, homophobia, and often manifests violently. In a rather stark contrast we have atheist fundamentalists who do truly evil things such as writing books or blogs that criticise daft beliefs and generally receive this label from the religious for openly supporting gay rights, feminism, and basic human rights (oh the horror … shudders).

In fact, the following nicely sums up this contrast … 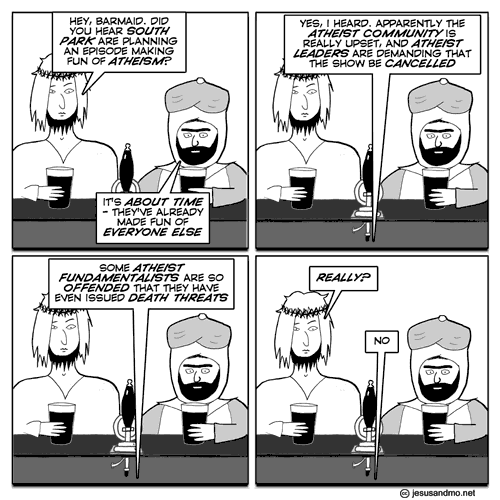 Those that deploy the term are generally making an emotional response to criticism of their silly beliefs and are not making a factual statement at all. Atheism does not have a system of beliefs that one can fundamentally adhere to. Some might argue that anybody who insists that there is no God and cannot and will not be convinced otherwise, could be classed as fundamentalist, but not even Richard Dawkins would hold that position. Those that believe are asserting a claim and when asked for evidence, are unable to provide any at all, so the claim is then dismissed – that is not fundamentalism, but is instead common sense.

It is about here that the religious will start to cite the abhorrent things that went on under Stalin – religion was suppressed, believers were persecuted and killed, religious buildings were destroyed – and this was the official policy of the state, so was this Atheist Fundamentalism?

No it was not, that was Marxist-Leninist fundamentalism, it was an irrational and fanatical adherence to a political belief and has far more in common with religion than anything else. You will not generally find anybody today, believer or non-believer, who thinks that any of this was a good idea.

A rather fundamental [pun intended] human right is freedom of thought, and most who do not adhere to religious beliefs do still vocally and very strongly support this concept, and so while they quite rightly raise strong objections to religions imposing themselves upon everybody by force, they also will equally strongly argue that people should be free to believe whatever they wish, even when the belief is clearly daft.

OK, you do not believe, would you ever change your mind?

Of course, all it would take is some evidence.

At the end of the debate between Ken Ham and Bill Nye on the topic of creationism they were each asked, “What would change your mind?”. The quick summary of their replies is as follows …

Here is that part of the debate …

5 thoughts on “There are no Atheist Fundamentalists”