You would think that outside of ISIS themselves, anybody openly criticising ISIS would be commended and supported, even within the Islamic world.

The chief editor of a prominent Indonesian newspaper, the English-language Jakarta Post, has been summoned for questioning by the police for publishing a cartoon that depicted radical Islamists in Syria.

The editor, Meidyatama Suryodiningrat, is being treated as a suspect under a blasphemy law, according to a police spokesman quoted in the Indonesian news media on Friday.

The cartoon, which ran in the daily newspaper in July, shows militants raising a black flag emblazoned with a skull and crossbones and Arabic phrases, including, “There is none worthy of worship except Allah.” In the background was a white pickup truck and what appeared to be the imminent execution of a row of blindfolded people on their knees.

… Mr. Meidyatama was quoted in The Post on Friday as saying he was “amazed” at the suggestion of blasphemy because the cartoon was meant to criticize deviant Islam.

“What we produced was a journalistic piece that criticized the ISIS movement, which has carried out violence in the name of religion,” he was quoted as saying, referring to the Islamic State militant group.

Conservative Islamic groups protested when the cartoon was published, contending that it “strengthens the stigma that Islam represents senseless murderers,” according to Haris Amir Falah, one protest leader.

The complete and pure insanity in play here is truly astonishing – no, it is not criticism of ISIS that “strengthens the stigma that Islam represents senseless murderers,”, but rather is the very existence of ISIS that does that. It is perhaps also well worth pointing out that those that gag any valid fact-based criticism of ISIS, are also themselves strengthening “the stigma that Islam represents senseless murderers,”. 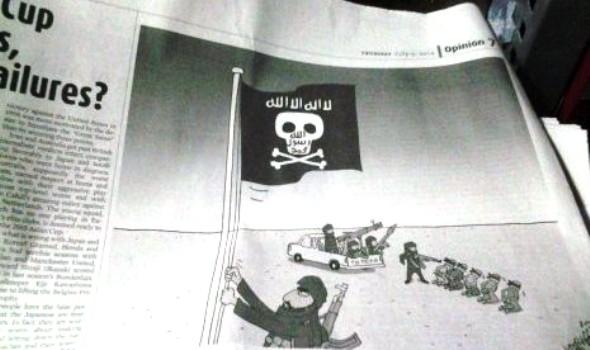 Now here is something that truly offensive

The newspaper has been forced to issue a front-page apology and also an retraction of their criticism of ISIS.

The government in Indonesia has in the past claimed that they support the concept of freedom of the press, but such words simply fade into meaningless rhetoric when viewed in the context of the police advising the BBC that Mr Suryodiningrat could be summoned next week, and could be facing five years in prison for religious blasphemy for the “crime” of deploying a cartoon that criticises a gang of brutal Islamic thugs.

The Indonesian Legal Code’s, Article 156(a), targets those who deliberately, in public, express feelings of hostility, hatred, or contempt against religions with the purpose of preventing others from adhering to any religion, and targets those who disgrace a religion.

Yes ISIS is indeed a religion, so public criticism of them for chopping off heads breaks this law.This, to anybody who gives it a few moments thought, is clearly absurd.

The law itself is meaningless, not just in this instance, but in every instance, because every single religious belief generally expresses hostility and contempt for every other belief, and so as you might expect, this law has produced many instances where members of one religion have persecuted the members of other religions.

There are some things that remain consistent and almost universal such as the observation that the word “tolerant” is not a word one can associate with Islamic belief, because these are mutually exclusive concepts.