Yes there are cool things to do in Portland, and no this is not officially one of them, and so, yes, I really am recommending that if given the chance to do it, that you check out a Transit station.

Trust me … it is not just a weird recommendation, and no, you will not be disappointed because this is unique.

Well yes, actually visiting the station for it’s own sake can of course be greatly enriched by checking out some of the stuff that is actually in Washington Park in Portland, such as the Zoo, or the Hiking trails, or the Rose garden, or the Japanese Garden, etc…. However, if doing any of those (and they are all worth doing), then earmark a bit of time to pause at the MAX transit station and check it out.

Side note: you pay to visit the Zoo (obviously), and also the Japanese Garden, along with a few other attractions, but the Rose Garden and of course the hiking trails are totally free. If going, work out what you care about and what it will cost in advance. It is of course possible to do the lot in a day, but it is perhaps better to savour the bits that are meaningful to you. Perhaps I’ll write up a few details at some point another time.

The Location is Unique

While most of the MAX transit system in Portland is an above ground tram like rail based transit system, the Washington Park MAX station is 260 feet underground. Yes, many metro system are of course underground, but 260 feet down is unique, and is the deepest in North America, and perhaps the deepest on the planet.

In and out is via an elevator that has two stops – surface and platform level. You might expect that they would be marked S and P (Surface and Platform) or similar, but no, here is a clue that this station is different. Inside the elevator they are marked “Present” and “16,000,000 years ago”.

It’s a 26 second ride, because at the depth of 260 feet, it is roughly about 26 floors you are travelling. 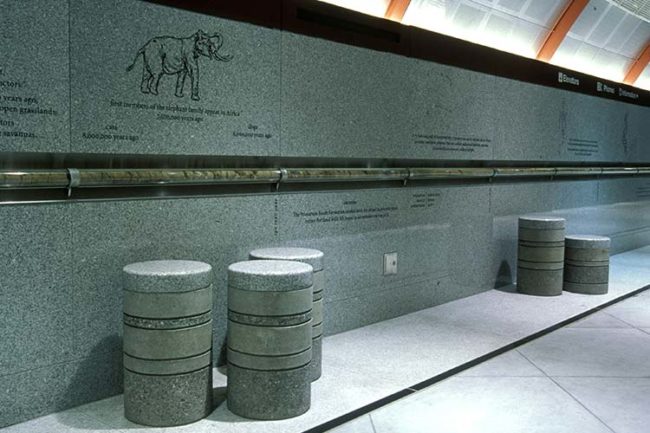 The Wall Images and Texts

Above (and below) the core sample are texts and images carved into the wall. It is clearly science based, evolution based, and tells you a story about what the evidence tells us within the various layers then dug into to build the station. Here are a couple of shots I took. 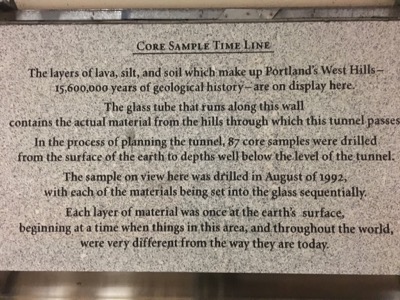 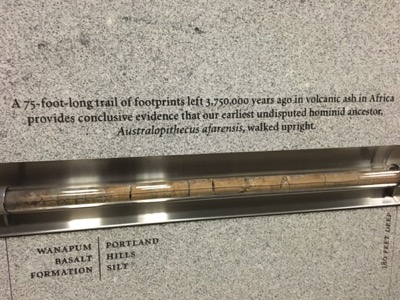 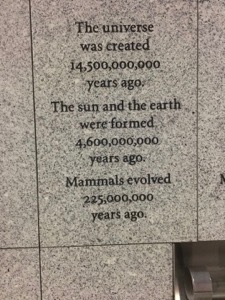 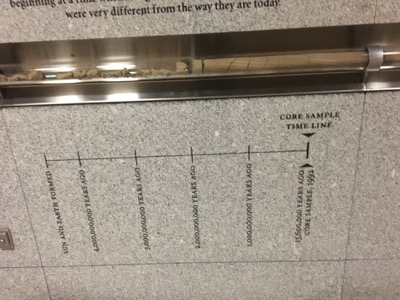 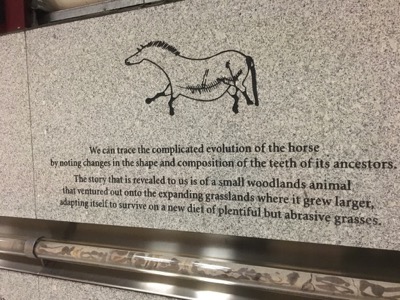 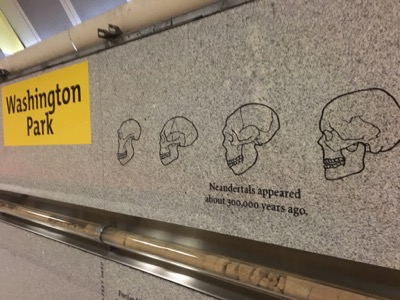 There are a few items on the wall that will puzzle some, for example an etching of a number … which hopefully you recognise, and yet it is not quite what you think it is. 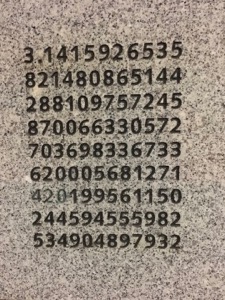 “Hey yes, that’s Pi” and so most move on after making that quick insight.

.. so the first 11 digits are correct and the rest is wrong.

This has of course been noticed by some …

As Mark Cowan points out in Underground Pi, the numbers etched in stone in the subway were taken from A History of Pi, which prints the digits in rows of 10 groups of 10 digits. The artist clearly took his numbers from the first column in that reference, thus printing the first thru tenth fractional digits, the 101th-110th, etc.

OK, let me explain that. The book that he copied the list from has a table that is a computer printout that was like the image below. The artist, not being a computer guy, grabbed the marked digits from the first column only and so he ended up with (the 1st 10, then the 101-110 digits of pie, then the 201-210 digits, and so on.

Since the rows on the wall in the station have 12 digits, it is not immediately obvious, but check and you will see that this is exactly what happened.

So technically, yes, it is pi … it’s just that many of the digits are missing. It also perhaps is something that really does represent our modern world in an unintended manner. The artist clearly grabbed something sciency from a science book to science up his display, but did so without actually understanding 1960’s computer layouts. Many today do the same and grab the fruits of science without truly understanding it.

It was not just the artist, nobody working on this noticed that it was not actually pi, and so clearly nobody questioned it, they just accepted it. That also is perhaps also symbolic of our modern world in so many ways – an unquestioning acceptance. 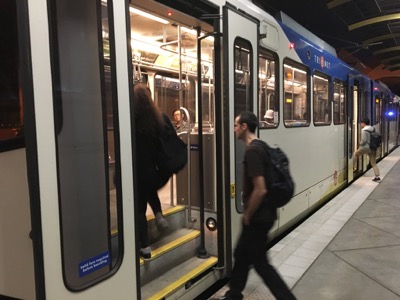 Eventually it is time to move on and ride the rails or elevator and so leave the station behind.

To whoever conceptualised this, I salute you, and yes I do appreciate that you also obviously had a hell of a lot of fun putting it together, and tossing in hundreds of small fun items along the way. Even considering the Pi bit, I still love it.

To all those visiting Portland, then here is one stop I’d recommend adding to your visit if ever in town. The stop is on both the Blue and Red Lines.

Here are some more notes I gleaned from various places…

A memorial to the only worker killed during the construction of the Robertson Tunnel is located on the wall next to the tunnel portal at the east end of the “Sunset” (westbound) platform.