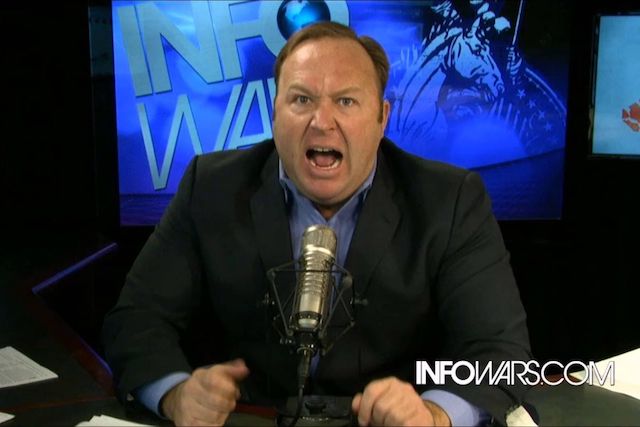 Alex Jones is perhaps one of the most obnoxious and odious p***ks on the planet. Using his Infowars platform he has vigorously and continuously promoted the claim that Sandy Hook was a false flag operation, that nobody died, and that the parents of the dead children are simply actors.

In 2012 the utterly tragic Sandy Hook school shooting happened – 20-year-old Adam Lanza shot and killed 26 people, including 20 children between six and seven years old. Where Alex Jones comes into the picture is that, as I mentioned above, he used his InfoWars platform to promote the claim that it was a false flag operation and that nobody actually died. If you think he is on to something, then there is no polite way of saying it – you are incredibly gullible and stupid.

As you might imagine, these claims are extremely distressing to the parents of the kids who died, and yet it gets even worse. Some of the people who believed Jones started harassing and threatening the parents. For example a woman named Lucy Richards was sentenced to five months in prison for sending threats to Pozner and De La Rosa, two of the Sandy Hook parents. She was accusing them of participating in a hoax and threatening their lives for it. With stuff like this happening, and a completely unrepentant Jones still pushing his claims, action was needed.

In March 2018, six families of victims of the Sandy Hook Elementary School shooting as well as an FBI agent who responded to the attack filed a defamation lawsuit against Jones for his role in spreading conspiracy theories that had caused survivors to be harassed, stalked and threatened.

True to form, Jones has been doing what he does best. He has carried on being an obnoxious and odious p***k. If you try that in a court of law then there are consequences, and so this has now happened (via the Daily Beast) …

A Texas judge has ordered Alex Jones and his Infowars hoax website to pay more than $100,000 in court costs and legal fees, marking the latest court victory for a Sandy Hook family suing Jones for his promotion of conspiracy theories about the 2012 elementary-school shooting.

Jones and Infowars are being sued by Neil Heslin, whose 6-year-old son was killed in the Newtown, Connecticut, shooting. On Dec. 20, Travis County Judge Scott Jenkins granted a motion for sanctions and legal expenses against Jones and Infowars, ordering them to pay $65,825 for ignoring a court order about providing documents and witnesses. In another ruling issued that same day in Heslin’s case, Jenkins denied an Infowars motion to dismiss the case and ordered Jones and Infowars to pay an additional $34,323.80, for a combined total of $100,148.80 levied against Jones and Infowars in a single day.

This is all still pre-trial, and so this is not the end-game, it is still only the beginning of the process.

It is also not the only trial. Jones is also being sued in Connecticut by other Sandy Hook parents. There he has behaved in a similar manner and has been hampering discovery. In fact it was the Connecticut trial that saw the jaw dropping move made by the Jones legal team. They accidentally transmitted child pornography to the Connecticut plaintiffs during the discovery process.

I personally hope they take him for every single cent he has and also take the shirt off his back.

The promotion of these fake claims deserves nothing less than that. Observing that the consequences for his fake claims is catching up with him is truly satisfying. That really is a great way to start the 2020s with.